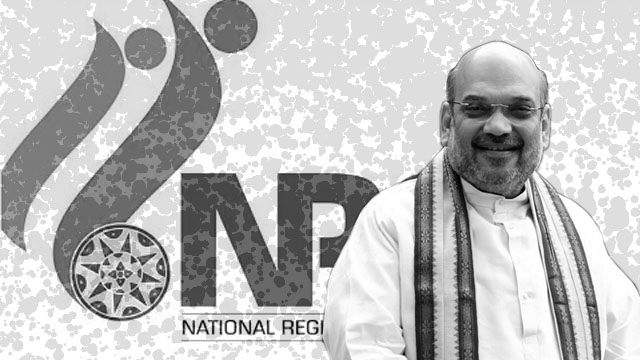 One can recognise the National Register of Citizens (NRC) exercise as the best example of Prime Minister Narendra Modi’s signature magic show. Whatever trick the magicians perform is done in the full view of the audience. Still, many nitty-gritty remains off the limit of the audience’s vision. The real trick lies in what’s not revealed. Many wizards aim at entertaining people and many would try to use their skills to dupe people and loot them.

The Bharatiya Janata Party (BJP) is clearly manifesting what it’s going to do on the NRC issue. However, the real essence of whatever it’s saying is remaining behind the veil. If one isn’t able to catch the trick of the thug before being robbed, then they would have no other choice but wailing over their misfortune. All wizardry isn’t pleasantly enjoyable. In understanding the BJP’s tricks, the official documents of the party and the parliament will immensely help us.

After the NRC was released in Assam, Home Minister Amit Shah claimed that it will be conducted all over the country. However, Bihar Chief Minister Nitish Kumar and West Bengal Chief Minister Mamata Banerjee reassured the people of their respective states that no NRC will take place there. On the other hand, governments of states like Haryana, Karnataka and Maharashtra have declared that NRC will take place in their states.

“Recently, the National Register of Citizens (NRC) list is published. There is a demand to prepare NRC in West Bengal and other states too.” (pp 1)

They are depicting the NRC as if it’s a matter of choice for their state and central leadership, and they are adopting this programme due to people’s demand. Actually, in 2003, former prime minister Atal Bihari Vajpayee amended the Citizenship Act, 1955, to bring forth the concept of NRC as a mandatory exercise.

Therefore, NRC isn’t a matter of a few particular states, rather, the people of the whole country must be concerned about this exercise. Saying that NRC will not happen in a particular state is actually a nefarious design to sedate the mass agitation against such a draconian move in that state. As without an active mass resistance, nothing can prevent the NRC exercise from taking place.

So far, the BJP has been propagating that with the passage of the Citizenship (Amendment) Bill, 2016, the Hindus excluded in the NRC will automatically get citizenship and, therefore, they need not have to worry. The BJP Refugee Cell’s pamphlet further says:

“The objective of the NRC preparation is to identify the illegal residents of the state and later take steps regarding this. In eastern and northeastern India, Muslims from Bangladesh are considered illegal foreigners. However, in this matter, the anti-BJP political parties, with a motive to save Bangladeshi Muslims, are telling the Hindu refugees from Bangladesh that the BJP will also  drive them out.” (ibid)

In that pamphlet of the BJP Refugee Cell, it’s also mentioned:

“Home Minister Rajnath Singh tabled the Citizenship (Amendment) Bill, 2016, in the Lok Sabha on 19 July 2016 after the BJP came to power at the centre.  In this brief bill, it’s said that the people from the minority communities of Afghanistan, Bangladesh and Pakistan, who are exempted from Passport Act, 1920, and Foreigners Act, 1946, will not be considered as illegal settlers. As a minority, Hindu, Buddhist, Christian, Jain and Parsis are mentioned. Due to this, they are now eligible to become India’s citizens. Therefore, it must be clear that no Hindu, Buddhist or Christian refugees will have to leave India or their houses, rather they are getting Indian citizenship in the future.”

The Business Standard quoted BJP’s outgoing president and Union Home Minister Amit Shah: “People of Bengal are being misled on the issue of NRC. I am here today to clear all doubts on the BJP’s stand… Mamata Di is saying that millions of Hindus will have to leave West Bengal. There cannot be a bigger lie than this…I want to assure the people of Bengal NRC will be implemented but nothing of this sort is going to happen. I assure all Hindu, Buddhist, Sikh, Jain refugees they won’t have to leave the country, they will get Indian citizenship and enjoy all the rights of an Indian national…“.

Despite such tall claims, it’s found that in the Citizenship (Amendment) Bill, 2016, there is no provision on providing citizenship to the non-Muslim refugees. Rather, it’s written that they (refugees) shall not be treated as ‘illegal migrants’.”  If this bill is passed then the refugees from Afghanistan, Bangladesh and Pakistan can only get the right to be not identified as “illegal migrants” and the right to apply for citizenship.

Then, the question is, how many non-Muslim refugees excluded from the NRC will get a chance to apply for citizenship? A Joint Parliamentary Committee (JPC) was formed to discuss the Citizenship (Amendment) Bill, 2016. The following is what the JPC report has on its page 39.

2.17 The Committee then queried about the number of persons belonging to minority communities who would benefit from the proposed Amendment on the basis of religious persecution. In response, the Intelligence Bureau* (IB) informed as follows:

“As per our records, there are 31,313 persons belonging to minority communities (Hindus – 25447, Sikhs – 5807, Christians – 55, Buddhists – 2 and Parsis – 2) who have been given Long Term Visa on the basis of their claim of religious persecution in their respective countries and want Indian Citizenship. Hence, these persons will be immediate beneficiaries.“(sic)

*The Intelligence Bureau represented the Ministry of Home Affairs in the JPC.

Actually, Muslim immigration is a myth. Mostly Hindus and Sikhs migrate to India from Bangladesh and Pakistan for permanent settlement as due to partition most of their relatives have settled in India. Therefore, as Muslims didn’t come in a large number from the neighbouring countries, hence, there is no question of them getting excluded from the NRC. Hence, the Hindus and Sikhs who came from East Pakistan/Bangladesh or Pakistan will be mostly excluded from the NRC. Moreover, irrespective of their religion, mostly the poor will be excluded from the NRC, especially the indigenous tribal people, who don’t have proper documents to show their domicile.

One must note that 1.9m people are excluded in Assam out of a population of 33.3m. Out of this 1.9m, 1.5m people are non-Muslims. Home Minister Shah has claimed that 20m people of West Bengal are illegal immigrants, which is nearly 20% of its population, ie, one in every five people is an illegal immigrant in West Bengal! If we even assume that a minimum of 40m people will lose their citizenship all over India due to the NRC exercise, then, as per the Intelligence Bureau’s report, only 31,313 people will get legal rights to settle and the right to apply for citizenship. The rest will be stamped as illegal immigrants. Along with the Muslims, they will be put in the detention camps.

Another big question is, why only a few non-Muslims will get the right to apply for Indian citizenship? The secret of this magic trick lies in the term “refugee”. A notion has been created that all those Hindus, Sikhs or non-Muslims, who came and have permanently settled in India are “refugees”. However, that’s not the case.

If the Citizenship (Amendment) Bill, 2016, is passed and enacted, then, according to the Gazette notification of 2015, a person has to prove three points to prevent being detected as an illegal immigrant or to gain the right to apply for citizenship:

It’s indeed quite hard to prove the last two points. However, it’s only upon proving all these three points that one can safeguard themselves from being identified as an illegal immigrant and will get the right to apply for citizenship.

What will happen to those who came to India due to religious persecution, however, didn’t inform the same at that point in time? The JPC asked the question to the IB and the transcript is noted in point 2.18, page 39.

2.18 Asked to state the fate of other people belonging to minority communities who have come to India from the three countries under reference due to religious persecution but have not declared so at the time of their arrival in India, the Intelligence Bureau submitted as under:

“For other to apply for Indian Citizenship under this category, they will have to prove that they came to India due to religious persecution. If they had not declared so at that time of their arrival in India, it would be difficult for them to make such a claim now. Any future claim will be enquired into, including through R&AW before a decision is taken.” (sic) (ibid)

Isn’t it a monstrous pun to have the applications of citizenship by millions scrutinised by India’s external intelligence agency?

At present, there are a lot of attempts to discombobulate the people over the Citizenship (Amendment) Bill 2016 and the Citizenship Amendment Bill 2019. The BJP is trying to peddle a sheer lie that the contents of these two bills are qualitatively different and the latter will preserve the demographic character of tribal areas under the Sixth Schedule of the Constitution, etc. In reality, these two bills have no real differences and the Citizenship (Amendment) Bill 2019 is a replica of the draconian 2016 bill. The enactment of it will threaten the tribal people, as under the NRC, even if they have to prove their citizenship/domicile documents, however, if they are denied citizenship under the NRC, then they can’t apply under the CAB as the Sixth Schedule areas will remain out of the purview of the CAB.

On 7 September 2019, Scroll.in wrote:  “In July, the Union government had sent instructions to all state governments to set up detention centres in all major cities… The home department last week reportedly wrote to the City and Industrial Development Corporation, which is the planning authority for Navi Mumbai, and sought a three-acre plot in Nerul for the detention centre.”

It’s well-known that land is quite expensive in metro cities or their outskirts. Still, moribund capitalism has no other way left to survive except for the sucking of enslaved people’s blood. At one point in time, the blood-drenched land of Bengal and Punjab got partitioned to protect the interests of the Mumbai-centric Gujarati-Marwari-Parsi-Muslim comprador capitalists, the vassals of foreign monopoly and finance capital. Today, in order to save those very Gujarati-Marwari comprador capitalists from an abject financial crisis, a draconian step like NRC is mooted and executed, in which millions of people are going to become disenfranchised refugees in their own land. This NRC will change the future of India and either it will create a grotesque fascist state or it will give rise to a new wave of strong resistance.