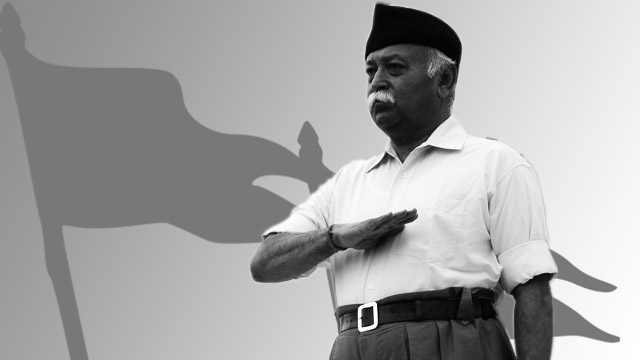 During the annual Vijayadashami ceremony of the Rashtriya Swayamsevak Sangh (RSS), Mohan Bhagwat, the head of the Hindutva fascist organisation, denied the existence of mob lynchings of minority Muslims, Christians, ostracised Dalits and tribals, and called such accusations levelled at the organisation and its affiliates as a conspiracy to tarnish Bharat’s (India) image. Bhagwat said “There is an attempt by some people to defame the country, to use its diversity to spark rows. The term being used these days is ‘lynching’ – it never happened in Bharat. What is the origin of this term, there is old story regarding it is found in other religions.” (sic)

Vijayadashami is the foundation day of the 94-year-old RSS. During this annual event, the RSS head usually speaks on some of the core strategic issues of the organisation. Last year it was about setting the 2019 Lok Sabha election’s roadmap for Prime Minister Narendra Modi and his Bharatiya Janata Party (BJP), this year it focused on cleaning its own image as it’s trying to influence global policy-making after becoming the omnipotent and omnipresent organisation of the Indian state and society. The Howdy Modi event in Austin, Texas, in September 2019, is seen as a success of the RSS’s massive groundwork in the US, which even made the US President Donald Trump share the stage with Modi.

Mob lynchings, over allegation of cow slaughter, beef consumption, child lifting or simply due to one’s religious identity (Muslim) or caste identity (ostracised Dalit), are new normal in Modi’s reign. A lot of Muslims, Christians, Dalits and tribals became victims of organised mob violence influenced by the RSS and the BJP. Almost all BJP-ruled states have experienced a surge in such mob lynchings targeting the Muslims and marginalised people following a similar modus-operandi.

Since 2015, the Modi regime and the RSS-BJP combo have been denying their involvement in these macabre atrocities against the marginalised people, however, they have clearly derived political mileage from these incidents. Mob lynchings help the RSS to keep its manpower engaged and the fear of its reign unchallenged on the Muslim and other marginalised communities. Even Union ministers were found cosying up with the perpetrators or defending the ideology that drove them to commit such heinous crimes. Bhagwat’s denial of lynching connection in his Vijayadashami address can’t

In most cases, the police in the BJP-ruled states have diluted the charges of mob lynching and blamed the victims for their own death. According to the Status of Policing in India Report 2019, 35% of Indian police personnel believe that mob lynching is deserved by Muslims who violate beef laws or slaughter cows. In this scenario, expecting justice from the government is a luxury for the victims and their family members.

The Quint maintains a database of mob lynchings in Modi-fied India, which shows 103 lynchings from September 2015 to September 2019. Starting with the infamous Dadri beef lynching of 28 September 2015, in which 55-year-old Mohammad Akhlaque was lynched by a mob on the accusation of cow slaughter, to Kalantus Barla’s lynching in Khunti, Jharkhand, on 22 September 2019, most of these incidents narrate the stories of aggrandizement of a malignant web of RSS-affiliated organisations.

Modi remained conspicuously silent on the issue of mob lynchings. He spoke only once, mildly, against the cow vigilante terror, when the Una incident triggered a nationwide Dalit outrage in 2016, which threatened the electoral prospects of the BJP in the Uttar Pradesh assembly election. However, since then, he has been in a silent mode.

Recently, the Modi regime formed a high-level committee of Union ministers, ironically with Home Minister Amit Shah as its head, to look into the incidents of mob lynchings. This proves that the accusations regarding their complicity in the mob lynching crimes have bothered the RSS and the BJP, and they want to downplay the incidents by deploying propaganda or by wrapping them up. This is a reason why Shah is allowed to head the committee.

As the Indian press is domesticated by the Modi regime and turned into its klaxon, it’s the foreign press, that’s causing trouble to the RSS. Its PR exercise to strengthen its presence in the power corridors of the US and other western countries is interrupted due to negative reports. The criticism of the RSS and the BJP perturbed the Hindutva fascist camp’s endeavour to become a global player, like Zionist terrorism, under the US’s aegis.

To thwart any criticism by the western press, the Modi regime and the RSS have been identifying themselves as “India”. Whatever they do, they do as if “India” is doing it. Any criticism of the RSS or the Modi regime by the foreign press, Indian press, opponents or activists is equated as a criticism of “India” itself and is labelled as anti-India and the individuals are accused of being anti-nationals.

During his Vijayadashami speech, Bhagwat stressed on protecting the image of India, without naming the RSS, because through such perversion of truth he can titillate the upper-caste Hindu elites and middle-class urban Indians — Modi’s core voter base — with hyper-jingoistic fervour. The narrative of a Hindu India under attack from obnoxious foreign powers, even though the Modi regime is itself selling India in piecemeals to foreign corporations, will instigate these hardcore Hindutva fanatics.

Even though India’s economy is in ruins, the Kashmir valley is under blockade for 64 days, 1.9m people are at the verge of becoming stateless in Assam, Modi’s disastrous corporate appeasement policy is ruining the lives of the poor, the RSS’s narrative will help the Modi regime to carry out an utmost contortion of truth. Using vitriol and by labelling opponents as enemies of the Hindu Rashtra (Hindu Kingdom) — now under construction — Hindutva fascism will try to muzzle all kinds of criticism.

Until the next Vijayadashami, the toady press, and the RSS’s offshoots will keep the narrative of “lynching is a west-constructed myth” alive and will blame the victims from Muslim, Christian, Dalit or tribal communities for their predicament. By the next Vijayadashami, the RSS will try to become an influential global entity and it’s to be seen whether the Indian people’s democratic anti-fascist struggle and the outburst of the Kashmiri and Bengali people’s anger against the RSS and the Modi regime allow Hindutva fascism to rule with impunity or propel it towards its long-impending fall.