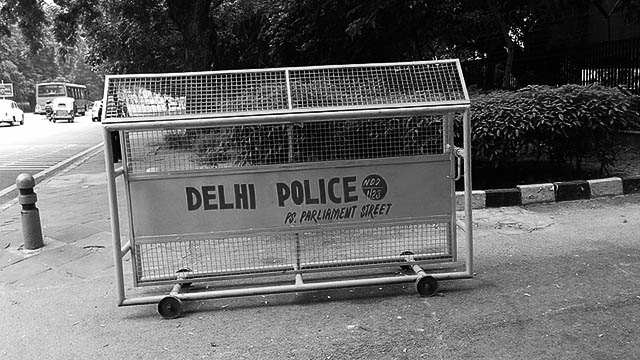 The recent brawl between policemen and lawyers in Tis Hazari court of Delhi blew into a full-fledged fistfight on Saturday, 2 November 2019, in which the lawyers were thrashed by Delhi Police personnel, which forced them to declare a strike in all six district courts of Delhi. On Monday, videos posted on social media showed policemen being thrashed by striking lawyers in the Saket Court. IPS officers like Madhur Verma complained about the lack of human rights for the policemen. Following instigation from senior IPS officers, lower-rank policemen rallied in a large number to the Delhi Police headquarters in ITO of central Delhi. As hundreds flocked the place demanding strong action against lawyers perpetrating violence against them and calling out the Commissioner of Police to act and protect them, a high-voltage political drama unfolded in the country, exposing the fissures within the ruling class and its machinery.

Like any other arm of the Indian state, the Delhi Police is also an utmost reactionary, anti-people, communal, Brahminical and bigot force, driven by the ideology of Hindutva fascism and Islamophobia. For years, this force has been accused of violating the human rights of minority Muslims, activists, journalists and dissenting political voices. Using its notorious Special Cell, the Delhi Police has always conducted grave crimes of abusing human rights of innocent people and jailed hundreds on concocted tales. As a docile tool of the ruling classes, the Delhi Police had arrested and implicated people like late Prof SAR Geelani, Kanhaiya Kumar, Umar Khalid, Anirban Bhattacharya, etc. It had conducted alleged fake encounters like the Batla House encounter and imprisoned many Muslims since the late 1990s, who later got released as innocent from the court of law.

When such a force comes down on the street to protest against lawyers, then it raises many doubts in an inquisitive mind. Why are the police literally protesting? What rights do they need now after becoming the omnipotent killing force in the city? What’s driving thousands of Delhi Police personnel, who weren’t personally attacked, to rally in an unprecedented fashion with their family members? What’s driving the policemen to raise slogans in favour of a certain former IPS officer who is now a BJP politician and a lieutenant governor of a union territory? Why are the Delhi Police personnel not acting against the perpetrators of the crime?

It’s not that the violence in the court is something the Delhi Police is worried about. The Delhi Police had earlier, under Bhim Sain Bassi, allowed the Bharatiya Janata Party (BJP) legislator Om Prakash Sharma to beat Kanhaiya Kumar and a Communist Party of India activist in the Patiala Court complex. Using jingoistic rhetoric, a large number of feral Hindutva fascism-incensed reactionary lawyers also joined him in beating the student leader. The Delhi Police watched silently while Kumar was thrashed brutally by the goons. Rather than saving Kumar, the same Delhi Police that’s now complaining of lawyers’ brutality, showed unapologetic support to the perpetrators and their leader Sharma. No one bothered to arrest Sharma, rather Bassi’s force tried to appease him by displaying cheap servility.

It’s the same Delhi Police that remained quiet and lived with its ignominy when the BJP Delhi chief and former Bhojpuri actor-cum-singer Manoj Tiwari assaulted IPS officer Atul Thakur. The press would report the issue as misbehaviour though pictures show Tiwari physically assaulting the officer. What pride was left of the spineless police force then, when Tiwari got the collar of the Delhi Police? Now that the Delhi Police personnel are themselves breaking the Section 144, which always prevails around the Delhi Police headquarters and forcing Amulya Patnaik, the commissioner of the force that reports to BJP’s outgoing president-cum-Union Home Minister Amit Shah, then isn’t it exhibiting a political crisis within the organisation that works as the armed force of the BJP?

The tragedy of the Delhi Police is that it can’t fight against the lawyers as they are from the BJP itself and operate with impunity in the courts due to their political connections. The district court bar associations are strongly tied with the BJP and its ideology of Hindutva fascism. Under no circumstances, the BJP will allow the Delhi Police the right to arrest or prosecute its core supporters in the lawyers’ fraternity. This is a major issue for the Delhi Police as getting beaten by the lawyers is in itself a major embarrassment and humiliation for the force and its moral. Patnaik and top IPS officers know that there can’t be any redressal of such grievances and hence, they can dupe the regular policemen with mere phrases, while the impunity of the BJP-supporter lawyers will continue to mock the moral of the force.

This inability to act against those who have beaten the policemen, those whose boisterous protests have left the Delhi Police clueless and disarrayed, and those who are armed with the power of law, is forcing the Delhi Police personnel to carry out a political rally in support of their cause, which demands the right to thrash those who oppose its omnipotence in Delhi. The policemen’s rally and agitation are calling for their right to combat the rumbustious BJP-supporter lawyers whose muscle-flexing forced it to the back foot and there is no element of the struggle for human rights or rule of law, as the police are the last to believe in any.

This is the real scenario of the police’s political outlook and the Delhi Police is no different. The leadership of the Delhi Police, constituting of upper-caste, male chauvinist, bigoted officers, nurturing such obnoxious thoughts of its men without worrying about the repercussions poses a challenge to democratic ethos and human rights. A force, which is infamous for its human rights abuse, can’t demand human rights’ shield because it has violated the same rights of its own victims. There is no Karma in real life, but, maybe for the first time, the Hindutva fascist police tasted the bitter medicine it has been promoting so far as a spineless servile vessel of the ruling classes.