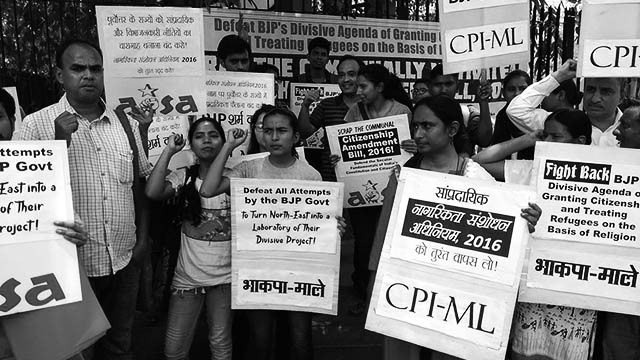 Assam, Tripura and the entire northeast is experiencing vociferous protests after Prime Minister Narendra Modi’s Bharatiya Janata Party (BJP) passed the contentious Citizenship (Amendment) Bill, 2019, in the Lok Sabha and the Rajya Sabha. The protests became so intense that a frightened Modi regime deployed the military, imposed an indefinite curfew and implemented the Kashmir model of brutal suppression of people’s resentment by unleashing severe military atrocities, which so far killed two in Assam and wounded many. While this brutality is ongoing, Modi has been assuring the people of Assam and the other six northeastern states that their demography, identity or culture won’t be threatened due to the Citizenship (Amendment) Bill, 2019.

The majority of the people of Assam, Meghalaya, Nagaland, Tripura, etc, are opposing the contentious Citizenship (Amendment) Bill, 2019, as it will allow non-Muslim refugees from Afghanistan, Bangladesh and Pakistan to become citizens of India. The Assamese, Ahom, Bodo, Garo, Karbi, Khasi, Koch, Kuki, Meitei, Mizo, Naga, Rabha, Tripuri, and a host of other tribes and ethnic communities fear that the Modi regime will alter the demography of the region by granting citizenship to the Bengali Hindu refugees, who came from Bangladesh (formerly East Pakistan). Though the BJP has mentioned that the Citizenship (Amendment) Bill, 2019, will not be in force in the tribal areas governed by the Sixth Schedule of the Constitution or in areas where the inner-line permit system exists, such assurance couldn’t allay the fear of the people of losing their ethnic identity to the Bengali Hindu refugees.

These refugees, the Bengali Hindus, were pitted against the ethnic population of Assam, Meghalaya, Tripura, etc, by the Indian ruling classes, who, on one hand, wanted to exploit the resources of these states using the colonial-era “divide and rule” policy, while on the other, wanted to use the Bengali Hindus as a settler community to change the demography of the region to a Hindu-majority one and, thereby, neutralise the threat posed by the ethnic people like the Nagas, Mizos, Khasis, etc, who fought for their right to self-determination. Today, as the economic crisis has grown manifold and as corporates need more access to natural and mineral resources, cheap labour and land, the ethnic tension in the region will help New Delhi to keep the people distracted and implement its obnoxious agenda.

Though the Modi-led BJP government has no plan to grant citizenship rights to all Bengali Hindu refugees, it’s fomenting trouble in the northeast to ensure that the hapless, poor Bengali Hindu refugees face the wrath of the xenophobic mob. Any fratricidal riot or genocide in Assam, which has a long, despicable history of gory atrocities against Bengalis, Hindus and Muslims alike, will widen the fissures among the oppressed and exploited poor people and eventually benefit the BJP and its parent organisation, the Rashtriya Swayamsevak Sangh (RSS). Such violence will help the BJP-RSS to polarise frightened Bengali Hindus in the northeast and also in West Bengal.

Much to the dismay of the Modi regime, the angry mobs have been so far targeting the BJP in these states, where it’s either the ruling party (Assam and Tripura) or an ally (Nagaland) for promoting the Citizenship (Amendment) Bill, 2019. The agitators claim that the BJP betrayed their demand for deporting the Bengali refugees, irrespective of religious identity. The National Register Citizens (NRC) exercise carried out by the Modi regime spending Rs 15 billion from the public exchequer, which rendered 1.9m people stateless in Assam, had 1.2m Bengali Hindus and nearly 700,000 Bengali Muslims. Fearing a major backlash from the Bengali Hindu community, the BJP scrapped the NRC as it wanted more Bengali Muslims excluded vis-a-vis Hindus.

Unapologetically lying to the press, the Assam Chief Minister Sarbananda Sonowal said there are 200,000 Bengali Hindus, who are currently living in nine of the 34 districts of Assam and are “eligible for citizenship”, as per the Citizenship (Amendment) Bill, 2019 and furnished a list on 9 December. According to the Assam government’s minister Himanta Biswa Sarma, 500,000 Bengali Hindus, apart from the 200,000 names furnished by Sonowal, also deserve citizenship under the new act, however, with a rider.

“These people need to apply first. Their applications will be assessed before they are granted citizenship. We expect to complete the process and give them citizenship before the next assembly session in 2021,” Sarma told the press. But the question, he left unanswered, is how can the intelligence agencies, who have to check the background of each case and issue clearance for citizenship, verify these applications? Citizenship requests under the Citizenship (Amendment) Bill, 2019, must be backed up by intelligence clearance to certify that the applicant fled their home country because of religious persecution and aren’t illegal immigrants. If even 500,000 people apply for citizenship, and the external intelligence unit Research & Analysis Wing (R&AW) takes one day to verify a record, it will take 1,370 years to complete the verification process because there aren’t millions of R&AW field operatives in Bangladesh or other countries.

It’s clear that though the people of northeast are fighting the Citizenship (Amendment) Bill, 2019, because it provides citizenship option to Bengali Hindu refugees, though there is a strong xenophobic tonality in the movements going on in the northeastern states, though the chauvinist organisations — secret and open allies of the BJP-RSS — are trying to encash the agony of the people for their own obnoxious agenda, still, as the people are fighting the state, the Hindutva fascists, therefore, it’s imperative for the democratic, anti-fascist forces to support them in their struggle against the Hindutva fascist scheme of changing the demography of the region.

Yet, at the same time, it’s vital for the democratic and anti-fascist forces to cajole the poor among these agitating ethnic people to join the struggle against Hindutva fascism. These poor people must be weaned away from the realm of xenophobia to the realm of unity against Hindi-Hindu-Hindustan juggernaut of the expansionist Indian ruling classes. It’s very important to clarify to the agitating people that the Modi regime’s plan is to turn northeastern India into a Hindutva fascist laboratory, where the demographic equation will be changed by using the Bengali Hindus settlers as a pawn. The fact that the poor Bengali Hindu isn’t an enemy of the poor Ahom or Khasi or Tripuri, must be established, to turn the compass of the struggle towards the ouster of Hindutva fascism from the region.

The intensification of the mass movements and the military deployment by Modi will open horizons of possibilities for the people of northeastern states. They will see how inhuman the Modi regime is and how it attempts to mum them like Kashmiris. The more intense will be the oppression, the stronger will be the resistance. Therefore, it’s time for the democratic and progressive forces to awaken, unite and organise the people against the Modi regime and its corporate masters to not just scrap the Citizenship (Amendment) Bill, 2019, but also the Citizenship Amendment Act, 2003, to resist the NRC and other sinister designs of the BJP-RSS to divide the poor and create cheap labour pool for corporates. The struggle must be for the right of the people on the land and the resources, rather than the domination of the corporate-funded Hindutva fascist forces, who are selling the region to corporate sharks.