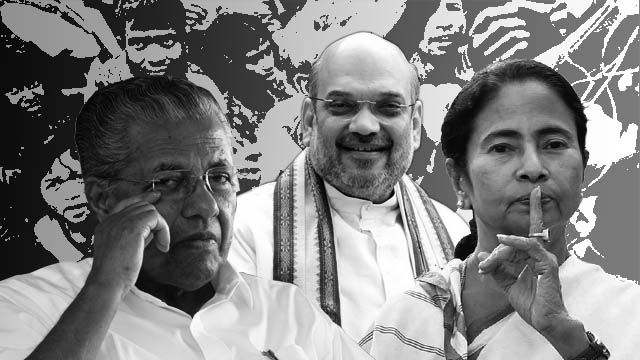 In the following paragraphs, we will analyse how both the BJP and its mainstream opposition parties are trying to discombobulate the poor people, the hapless poor Hindus and Muslims alike, on the threat looming large on them. A detailed analysis of the provisions of the Citizenship Amendment Act, 2019, and the Citizenship Amendment Act, 2003, which mandated the National Register of Citizens (NRC) exercise for India will expose these parties.

The Citizenship Amendment Act, 2019, is anti-Hindu in character

Despite the tall talks of the BJP and the Rashtriya Swayamsevak Sangh (RSS) — the ideological mentor of the Modi regime — over the Citizenship Amendment Act, 2019, it’s important to remember that this law is an absolutely anti-Hindu, anti-Dalit and anti-tribal law, apart from being an anti-Muslim law.

Under the Citizenship Amendment Act, 2019, only those will qualify to apply for Indian citizenship who:

Once a person can provide evidence of all these to the Indian bureaucracy, infamous for its red-tapism and corruption, their application will be verified by India’s external intelligence agency Research & Analysis Wing (R&AW).

Apart from the R&AW’s clearance, there must be an intelligence clearance for each applicant from India’s internal intelligence agency Intelligence Bureau (IB).

It’s only after the R&AW and IB clearance, followed by the documents to prove that they are not illegal immigrants but came to India legally, ie, with a visa, that one will not be considered as an illegal immigrant but a refugee and will qualify for citizenship.

As per the findings of the Joint Parliamentary Committee (JPC), which reviewed the Citizenship (Amendment) Bill, 2016, only 31,313 people were supposed to get citizenship with the enactment of the law. While India houses millions of non-Muslim refugees who fled from Afghanistan, Bangladesh, Pakistan and Sri Lanka, this number is a very insignificant fraction. For an effective solution to the refugee crisis, even to allow the non-Muslim refugees avail citizenship, the Modi regime should’ve uncomplicated the process at the very first place.

Such a complicated process means the Modi regime isn’t serious about providing citizenship to non-Muslim refugees but dangle the Act as bait to bedazzle the vulnerable Hindu refugees in Assam, Meghalaya, Tripura and West Bengal and use them as footsoldiers in the obnoxious communal polarisation drive of the RSS. The BJP will immensely gain from a discombobulated Hindu and Dalit refugee base, which is evident from the electoral success of the party in Assam, Tripura and West Bengal. With the Citizenship Amendment Act, 2019, widening and intensifying social antagonisms in communal lines, it’s easy for the BJP to use Islamophobia to polarise the Hindu refugees behind it, showcasing the mass movements by the xenophobic indigenous people of northeastern India and the frightened Muslims in different parts of the country.

Can state governments deny the implementation of the Citizenship Amendment Act, 2019

The Citizenship Amendment Act, 2019, was passed in both houses of the Parliament and has got the assent of the President to become a law. Any attempt to stop its implementation by a state government will be an unconstitutional act and the Central Government can invoke Article 256 (Obligation of States and the Union) to remind the defaulting the state of its constitutional obligation.

To stay aloof from Supreme Court’s reprimand or the dismissal of the state government under Article 356, no state government will actually deny the implementation of the Citizenship Amendment Act, 2019.

Be it Kerala Chief Minister Pinarayi Vijayan of the Communist Party of India (Marxist) or his party’s bete noire West Bengal Chief Minister Mamata Banerjee, when they claim that the Citizenship Amendment Act, 2019, won’t be implemented in their states, then they are befooling the people by concealing the constitutional provisions that make it mandatory for them to implement such laws.

It’s only the NRC exercise in which the state governments can intervene, though they can’t prevent its execution as it’s mandated by the Citizenship Amendment Act, 2003. The only thing that the state governments can do, if they are concerned, is that they don’t detain the people who will be left out of the NRC. Though the Union government has asked the states to create massive detention facilities to keep the stateless people away from jails, where criminals are lodged, the states can deny detaining people as law and order is a state subject. However, how much the states will actually dare to resist the Modi regime’s diktats is a question as none of these chief ministers are consistent in their policies regarding minorities or refugees, and TMC supremo Banerjee tops the list as the most hypocrite and opportunist among all.

The sheer hypocrisy of Mamata Banerjee and the TMC on NRC and the Citizenship Amendment Act, 2019

The Citizenship Amendment Act, 2003, was enacted by Atal Bihari Vajpayee-led BJP’s government in 2004 when TMC was its partner. Banerjee supported the enactment of the law and didn’t call NRC, which is mandated by the Citizenship Amendment Act, 2003, an anti-people law then. Rather, until 2006-07 her political rhetoric on the question of refugees and “illegal immigrants” was the same as the BJP’s.

One can’t forget Banerjee’s attempt to draw attention in the Lok Sabha in 2005, when she was the sole TMC MP, over the question of alleged “illegal infiltrators” in West Bengal. She tried to wrap her shawl around her neck after accusing the CPI(M)-led Left Front regime of nurturing “illegal Bangladeshi infiltrators” as its vote bank; ironically, the BJP accuses her of the same at present. Coming from a Bengali Hindu refugee family herself, Banerjee’s tirade against the Bengali refugees was despicable and was condemned by the people of the state, due to which her party lost the 2006 assembly election.

At present, out of political compulsion, though Banerjee has been opposing the NRC exercise and the Citizenship Amendment Act, 2019, she is secretly preparing for a statewide National Population Register (NPR) exercise, which is called the precursor of the NRC, from April 2020 onwards. Her government has issued notification for the training of officials for the NPR exercise, and still, she is showing the audacity to claim that she won’t allow NRC and Citizenship Amendment Act, 2019 in her state!

While Banerjee is opposing the Citizenship Amendment Act, 2019, and hapless Muslims are looking up to her for rescue from the BJP-RSS’s sinister agenda to render them homeless in their own country, her government, following the direction of the Modi regime, is already building two massive detention centres to house “foreigners”. When it was exposed, her government claimed the detention centres will house “drug-peddler” foreigners — Africans — who can’t be kept in jails with other criminals. The number of such prisoners is so minuscule in West Bengal that no sensible person will recommend two giant detention centres to house them.

The TMC’s MPs like film actresses Mimi Chakraborty from Jadavpur constituency, which has a large number of Bengali Hindu refugees, or Nusrat Jahan Ruhi Jain, the MP of Basirhat, another Muslim-majority constituency with a large number of Hindu refugees, abstained from the Lok Sabha when the crucial voting was on for the Citizenship (Amendment) Bill, 2019, but remained active on social media with trivial affairs. In total, eight TMC MPs didn’t attend Lok Sabha on the day of the voting, and this gave a signal to the BJP. Even the TMC is staying aloof from most of the people’s movements against the Citizenship Amendment Act, 2019, the NRC and the NPR. On the question of NPR, the TMC and Banerjee’s government is maintaining a conspicuous silence. Surprisingly, none of her opponents is questioning her silence!

What is the way out now?

Though 18 appeals are filed in the Supreme Court against the Citizenship Amendment Act, 2019, it’s unlikely that the apex court will strike it down. There is a clear indication that the Supreme Court will uphold the Act, albeit, with some insignificant riders.

For those opposing the Citizenship Amendment Act, 2019, and the NRC-NPR, it’s very important to understand that these provisions are not exclusively for tormenting the Muslims or helping the Hindus but to disenfranchise a large section of the poor of the country, as they are the one with fewer or no documents to prove their legacy. These provisions are here to create a large pool of stateless labour for the corporate world.

A nationwide strategy to force Modi to withdraw not only the Citizenship Amendment Act, 2019, but also the Citizenship Amendment Act, 2003, the mother of all evil is necessary now. To develop a strategy, class unity of the poor, which is fractured by the Hindutva fascist onslaught, must be rebuilt and various struggles waged in isolation against the Citizenship Amendment Act, 2019, NRC and the NPR must be combined. Rather than harping upon the goodwill of the opportunist opposition, the poor Muslims, Dalits, tribals and indigenous people must be educated, aroused and united by the democratic and anti-fascist forces to fight the Hindutva fascist conspiracies. Only a massive nationwide, concerted and organised movement of the working class, the peasantry, the toiling masses and student-youth sections can bring the government to its knees and force it to withdraw these laws. Without such a united struggle, there can’t be any real respite for millions who will face Hindutva fascism’s wrath.