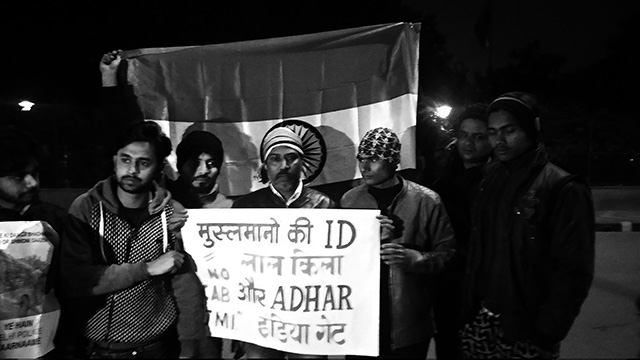 A tense environment is reigning in New Delhi and other parts of India, especially Uttar Pradesh and West Bengal, where the Muslims are protesting against Prime Minister Narendra Modi and Home Minister Amit Shah-led Bharatiya Janata Party’s (BJP) autocratic regime and its contentious Citizenship (Amendment) Act, 2019, or CAA, an utmost anti-constitutional law. Many of the Muslim protest movements are marred by violent outbursts, ruckus and vandalism. The Modi regime, the BJP and its parental body Rashtriya Swayamsevak Sangh (RSS) have been spinning Islamophobic and communal narrative around each outburst of public anger by highlighting the violence and arson. Linking the violence with the identity of the Muslims, the RSS and its offspring organisations are trying to derive political mileage from the Muslim protest movements.

As a large number of Muslim protest movements against a long series of injustice meted out to the community since 2014, when Modi was elected by the bigoted Indian upper-caste Hindu elites and urban middle class, are erupting at each corner of the country, the optics of some sporadic violence, which is definitely counter-violence against the state’s provocation, is used to demean the protesters and create xenophobia. Vandalism done during the berserk is blamed upon the Muslim protesters without any investigation.

Modi’s sycophant mainstream press has been helping the regime to set narratives and fuel Islamophobia by selective coverage. A large number of Hindutva fascists, lovers of Hindutva fascists, liberal Hindutva agents and the so-called Gandhian left-liberals — closeted Hindutva fascists per se — are vehemently opposing acts of violence, and are blaming the Muslim protesters, thereby demeaning their struggle and valour.

The Hindutva-inclined press didn’t miss a golden opportunity to carry out a malicious campaign when Muslims of Delhi’s Seelampur rose up against the atrocious Modi regime. Magnifying the fringe violence, as some major national security threat, more dangerous than the fact that 200m people will be outrightly denied citizenship rights through a contentious Act, Modi’s toady press tried to incite the Islamophobic Hindus of Delhi against the Muslim protest movements and even achieved limited success.

Violence is an inevitable byproduct of the historic mass movements that India is witnessing at present, whose parallel can’t be found in the history after the people’s struggle against colonial rule and against the atrocious national emergency that Indira Gandhi imposed in 1975. All major mass movements in the country bear the testimony that violence is an inalienable part of people’s movements. Violence is often generated through fascistic actions of the ruling classes and their stooges, which trigger counter-violence, the bid by the oppressed, the exploited, to assert themselves and avenge their humiliation.

The Hindutva fascist camp carries out smear campaigns by citing violence and distracts mass attention from the core issues that are raised by the Muslim protest movements. For those who were born and tempered in the politics of violence, bigotry and hatred, the scene that Muslims are protesting and that there are fringe violence here and there, becomes a scope to score political brownies and feed the visceral anti-Muslim hatred of its core support base in a city like Delhi by tailoring the incidents accordingly.

Being good in whataboutery, especially in uttering the “where were you when…?” cliche, it’s the turn for Modi, Shah and their bootlickers to answer some uncomfortable questions on violence. It’s hard for the Hindutva fascist RSS-BJP, rather, it’s impossible for them to answer, still, each Muslim, each democratic and anti-fascist individual on the street should ask these questions to those who accuse Muslims of promoting violence.
When a large number of upper-caste Rajputs were protesting against the film Padmaavat, which was the most misogynist film of recent times, by attacking school buses, attacking public transport vehicles, and disrupting law and order, why the Hindutva fascists remained quiet? Why they allowed a handful of Rajputs to carry out vandalism and violent agitation all over north India? Was the Rajput violence, rampage and vandalism qualitatively superior to the Muslim protest movements?

While there were many bush telegraph campaigns by the ruling classes to demean the Jat agitation for reservation and the movements by the Gujjar community, violence broke out and there was rampant destruction of public properties. Why the BJP and its loose cannons didn’t dare to oppose those movements in a similar tone?

Why did the BJP-RSS and their toadies remain mum on the rampage by the cow vigilante “Gau Rakshaks” affiliated with the Bajrang Dal in Uttar Pradesh’s Bulandshahr, where their leaders killed a police officer — Subodh Kumar Singh — when he went to control the law and order situation because he was the former investigating officer of the mob lynching case of Muhammad Akhlaq, killed by another Hindutva fascist mob in September 2015? Why no right-wing opinion mongers, rabble-rousers and Hindutva proselytisers who advocate absolute obeisance towards the state apparatus, dared to oppose the murderers of Singh, rather, shielded them?

There will be no answers to these, as there will be no answers on the series of mob lynchings, where wearing their political-religious identity on their sleeves, violent thugs killed hapless Muslims on the streets, in full public view, on one or another pretext. Modi and Shah won’t clarify why they supported the 2013 Muzaffarnagar pogrom, the 2002 Gujarat pogrom, the 2008 Kandhamal pogrom, the killing of pastor Graham Steins and his children in a station wagon, the burning down of West Bengal by the Hindutva thugs on the occasion of Ram Navami in 2018? The Delhi Police or the Uttar Pradesh Police won’t say why they allow hoodlums dressed as Kanwariya pilgrims carry out vandalism armed with the support of the RSS?

The so-called conscious citizens, the left-liberals, the Gandhists are repeatedly snarling when they see Muslims protest movements growing manifold without them and their so-called secular cliches. Accusing the Muslim protest movements of being wrong, they are attempting to usurp the leadership of these movements.

Telling the protesting Muslims and students what’s acceptable and what’s not, asking them to tolerate injustice quietly and raise only those slogans that are acceptable to the so-called liberal camp or conforms to the standards set by the Hindu politicians, these leeches, fifth columns, disguised as friends, are trying to destroy the Muslim protest movements, an integral part of India’s anti-fascist struggle.

Successfully rejecting the myopic political views of these so-called left-liberals, the Muslims are fighting for their survival and these Muslim protest movements, directed to safeguard the Constitution, its secular character, the rights of the people, are drawing a large number of non-Muslim supporters without any interference of the so-called seculars. They aren’t going to capitulate to the RSS-BJP and the obnoxious agenda of Modi-Shah. The Muslims are protesting with determination to push the government rollback the CAA, the National Register of Citizens (NRC) and the National Population Register (NPR), and they are showing no sign of relenting.

It’s important to view the issue of violence in mass movements using a pragmatic perspective. All political forces have been using violence as a weapon to have their way in politics. In this scenario, when Muslims are protesting a direct attack on their status as citizens in the country through the CAA, the NRC and the NPR, it’s evident that violence will take place, and it will take place in two distinct ways in the Muslim protest movements.

Firstly, unscrupulous elements, Luddite elements will sneak into the Muslim protest movements and use the mass outrage to fuel violence and carry out vandalism. Secondly, the ruling classes, especially the cash-rich the RSS and the BJP, will send their own cadres, as scabs, along with disguised police personnel to foment trouble and instigate violence. In the cases of Delhi and West Bengal, the latter became the predominant way of suppressing the movements. The RSS-BJP is sending agent provocateurs in these unorganised political demonstrations to spark trouble and allow the police to use the opportunity for unleashing state violence. The reported arrest of Kamalesh Singh, an RSS activist, in the cases of setting trains on fire in West Bengal, shows who is the real perpetrator.

Violence and acts of vandalism must be abhorred and avoided by those organising the mass movements against the Hindutva fascist Modi regime and the RSS’s vision of creating a theocratic state; however, there will be occasions when violence will occur, independent of the wish of the genuine participants, as the disguised scabs will carry out acts for which they are deployed by the ruling classes. Simply negating the Muslim protest movements,  because of its Muslim identity and sporadic incidents of street violence, to restrict the Muslim’s space for dissent, to vilify the Muslims in the mainline stories is simple treachery.

The modern Gandhists, who shiver at the mention of violence, who vociferously oppose the vandalism and the destruction of public properties, will remain mum on the fact that all public utilities and properties, including Indian Railways, are going to be sold, rather, given away, to Ambanis and Adanis in a few days to come. Privatisation of public resources is violence, government thrashing peaceful protesters is violence, police vandalising a university and its library is violence. So, even though the Hindutva fascists and closeted liberal Hindutva fascists will continue condemning the Muslim protest movements as communal and violent, the Muslims must not apologise but strive to achieve their constitutional rights through democratic movements, while curbing the scope for agent provocateurs of Modi to instigate trouble. India belongs to all communities and the Modi regime can’t, with a stroke of a pen, deny people their land and identity.