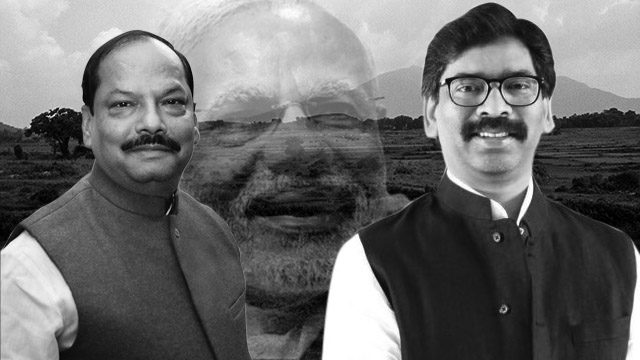 As soon as the Jharkhand assembly election results showed that the Bharatiya Janata Party (BJP)-led National Democratic Alliance (NDA) is routed out of power and the United Progressive Alliance (UPA) — consisting of the Jharkhand Mukti Morcha (JMM), the Congress party and the Rashtriya Janata Dal (RJD) — swept the poll winning 47 seats, out of a total 81 seats, there was a wave of happiness seen throughout the country, as those protesting against Prime Minister Narendra Modi’s contentious Citizenship (Amendment) Act, 2019, (CAA), and the National Register of Citizens (NRC), saw the BJP’s defeat as their own victory. The jubilation spread like a wildfire, at the cost of the BJP’s ignominy. Modi’s hallow of invincibility was breached again. However, the picture isn’t as rosy as it’s projected through the Jharkhand assembly election results.

Though collectively the UPA got 35.3% votes, ie, 1.9 percentage point more than the BJP, it’s a fact that the saffron party is still a favourite choice for the upper-caste Hindu voters of the state. Even a large section of backward caste Hindus (OBC) and Dalits have voted for the BJP. The Muslim vote of the state, which is 13.8% of the state’s total voter base, was divided between the UPA constituents and the All India Majlis-e-Ittehad-ul-Muslimeen, which entered the fray for the first time. Apart from the Muslims, the tribals, who are ironically only 35% of the population in the state created for tribals, voted en masse against the BJP.

Since Jharkhand was carved out of Bihar in 2000, the BJP-led NDA and the Congress party’s UPA ruled the state directly or indirectly. It was under them that the resources of the state, from its water, forests, land and mineral reserves were handed over to big mining corporations for plundering. The tribal people were forcefully evicted from their villages and forests to clear them for mining operations. The forceful eviction of the tribal people continued unabated during the Modi regime, and former chief minister Raghubar Das didn’t relent in oppressing the tribals. Following the UPA’s footsteps, the BJP government of Das continued unleashing paramilitary and police terror on the tribals resisting the corporate aggression on their water, forests and land. Their struggle was labelled as Maoist insurgency and vilified for years to justify the police atrocities.

Das claimed Rs 3 trillion-worth investment was promised in the state out of which by 2018 Rs 700 billion was invested and 546 industries were set-up, in which the infamous Adani Group, one of the major donors to the coffer of Prime Minister Modi, promised Rs 200 billion during the Jharkhand Mining Show 2017 – Mining & Minerals Summit. These tall claims of industrialisation and mining actually aimed at attacking the very foundation of the tribal people and the environment that’s protected by the tribal communities for centuries. The more the Das regime began its land and jungle annexation drives to appease the corporate mining barons, the stronger the anti-corporate tribal resistance grew.

By accusing the tribals of being Maoists, the police atrocities reached a peak under Das. In 2016, police firing killed two, injured more than 40 and arrested many in Ramgarh district of the state. The police atrocities irked the tribal villagers to such an extent that a massive movement “Pathalgadi Movement” started throughout the tribal-dominated villages of Jharkhand from 2017, where the tribal people, upholding the Constitution’s Fifth Schedule, declared the entry of the police into their territory without the permission of the Gram Sabhas as illegal. The frightened Das regime unleashed brutal police terror on one hand and, on the other hand, pushed the BJP’s parent body Rashtriya Swayamsevak Sangh (RSS) to incite communal violence over the cow.

Due to this two-pronged strategy, Jharkhand became a lynching capital, following the footsteps of Uttar Pradesh. Muslims were lynched by inciting a mob of OBCs and ostracised Dalits throughout Jharkhand. The RSS tried hard to polarise the tribal people under the banner of Hindutva to destabilise the Pathalgadi Movement, which became epidemic in the tribal belt, but the effort failed.

In its sheer frustration, the BJP-led government filed sedition charges under Section 124 A of the Indian Penal Code against more than 10,000 people in Khunti district alone. While ministers went to garland mob lynchers, the poor tribals were arrested arbitrarily and charged with sedition by the Hindutva fascist state. At the same time, these hapless people were dying due to unavailability of food or for not being able to link their Aadhaar Cards with their Ration Cards.

Though the anti-tribal and pro-corporate measures of the BJP caused severe damage to the party’s poll fortune in the tribal belts, yet, it’s a fact that Hindutva fascist polarisation has paid a rich dividend to the RSS. Its toxic bigoted ideology has a large number of takers in urban, semi-urban and even non-tribal rural areas. The gradual change in the demography of Jharkhand through New Delhi’s settlement policy, which aims at turning the tribal people into a minority group in Jharkhand by increasing caste Hindu settlements and seize the ownership of the water, forests and land, actually helped the BJP and the RSS immensely. The 33.4% votes that the BJP got, as per the Jharkhand assembly election results, prove that millions of radicalised upper-caste, Hindu elites and the middle class voted for the saffron party despite its excesses.

It’s imperative to understand that the neo-liberal economic model will make the plunder of water, forests and land of the tribal people in mineral-rich Jharkhand a necessity for any parliamentary political bloc. The minerals, worth billions of dollars, stored under the hills and forests, make corporate aggression inevitable. No parliamentary bloc will be able to thwart this aggression. It’s only by intensifying their resistance struggle against the mining corporations’ juggernaut of loot and plunder that the tribal people of Jharkhand can defeat their principal enemy and even uproot the threat of Hindutva fascist polarisation. Jharkhand assembly election results merely show the BJP’s inability to get a majority; it’s not a final seal on the fate of Hindutva fascism, which can happen only through the tribal people’s resistance struggle for protecting their water, forests and land.