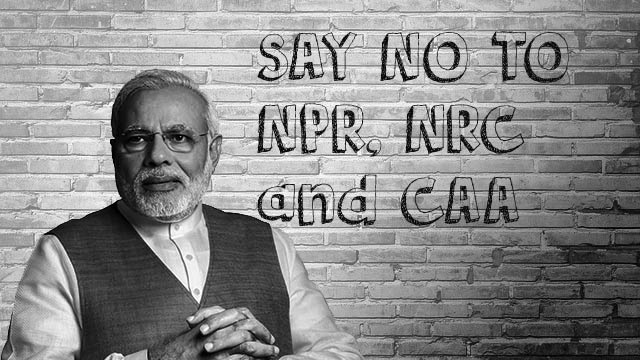 Prime Minister Narendra Modi’s speech in a Bharatiya Janata Party (BJP) rally at New Delhi’s Ramlila Maidan on Sunday, 22 December 2019, attempted to turn the tables on the opposition over a nationwide outrage regarding the contentious Citizenship (Amendment) Act, 2019, or the CAA, and the notorious National Register of Citizens (NRC). The only weapon that the senile 69-year-old Hindutva fascist, who usurped power by polarising feral Islamophobic upper-caste Hindu voters under the saffron banner, used to deceive the people was incessant lies, which even contradicted his party’s hitherto standpoint on the issues of CAA and NRC.

Peddling lies has been Modi’s evergreen strategy, which always yielded rich dividend, giving him an edge against his contemporary competitors in the Indian political arena. He lied that there was no talk about the NRC in the government, that there is nothing for the Muslims to worry about regarding the CAA, it’s just that the opposition is fuelling riots to score political brownies, and that he’s serving the poor through his schemes.

Modi told his rumbustious supporters, most of whom — including radicalised children — raised slogans demanding the Muslim protesters be shot dead by the police force, that the opposition is conspiring against him. The peddling of the age-old conspiracy theory in which he joins dots to connect the leftwing opposition, whom he calls Urban Naxals, with the right-wing Congress party, and Pakistan, was used in galore during the Ramlila Maidan rally, and following his cue, the entire bandwagon of the BJP began licking their own spit, asserting that there were no discussions on the NRC.

The foremost political acrobatics was exhibited by the big fat man of Indian politics, Home Minister Amit Shah. Toning down his rhetoric on the issues of CAA and the NRC, and to discombobulate the common people regarding the forthcoming National Population Register (NPR), Shah told Modi’s toady ANI Editor Smita Prakash “NPR is a register of population, NRC is a register of citizens. There is no link between the two and the two have different processes”, which again is a blatant lie. Shah also told the ANI editor that the cabinet never discussed the NRC.

If we simply go by the government’s records, then we will be able to counter the lies of Modi and Shah unwaveringly, however, the purpose of this article isn’t to expose the lies of Modi and Shah on the NRC and CAA, rather highlight the fact that this sudden change of tonality isn’t a strategic retreat but a sly tactics of the Modi regime to buy time and put the protests in the back burner.

Firstly, one needs to have no wrong notion that the Modi regime or the BJP, acting as per the vision of Rashtriya Swayamsevak Sangh (RSS) — the fountainhead of Hindutva fascist terrorism — to turn India into a theocratic dictatorship, aren’t seeking any rapprochement with the protesters, including the Muslims. Rather, the BJP, the RSS, and the Modi regime are capitalising on the massive protests to fan communal hatred and polarise their core voters, the upper-caste Hindu elites and middle class, who form the core decision-makers in Indian politics due to their access to wealth and privileges. The Modi regime is supporting Uttar Pradesh Chief Minister Yogi Adityanath, a hardcore Hindutva fascist rabble-rouser, in unleashing a series of macabre atrocities targeting the Muslim community, including vandalism at their localities, arbitrary arrest of more than 800 people, filing of false criminal cases against more than 25,000 people, and, above all, killing more than 17 people in state-sponsored massacres.

Secondly, the Modi regime is creating false narratives on the unprecedented people’s movements against it throughout India by demonising the protesters and mocking their political understanding. A batch of Hindutva apparatchiks who have been indoctrinated in bigotry since youth and who act as servile agents of big corporate houses is blaming the youth, the students, the intellectuals, the working class, the toiling people and even the scholars of being “misled” for opposing their obnoxious agenda. Yet, when these people refuse to oblige the rulers, when they dare to carry on their agitation to save the spirit of Indian Constitution, then the BJP-led police machinery brutally persecutes them and even kills them. The agitation and people’s discontent is slyly projected as rioting, while the real pogroms organised by the BJP-led state machinery in Uttar Pradesh and Karnataka are shown as “maintenance of law & order”.

Thirdly, after exhausting all other weapons to suppress the people’s uprisings, the Modi regime is now using the military to catapult itself from the mire. Army Chief Bipin Rawat earlier played the Line of Control (LoC) card to hoodwink the masses; when it didn’t work, he made an explicitly political statement, accusing the opposition of unrest. By dangling the trophy of Combined Defence Services’ chief’s position before Rawat, who is retiring in few months, the Modi regime is trying to exploit the pro-army chauvinistic emotions of the Indian middle class and elites. The LoC tensions and the vilification of protesters by Rawat will help Modi to build pro-jingoistic rhetoric and tackle the huge tides of anti-incumbency.

In view of these, if one subscribes to the false notion that the Modi regime will either retreat on the NPR, the NRC and the CAA or will seek rapprochement with the protesters by shedding hubris and hostility, then they will be living in a fool’s paradise. There can’t be any retreat for the Modi regime as it’s doing the NRC and its first step — NPR — spending more than Rs 125 billion from the public exchequer at the gloomiest hour of Indian economy to build up a massive cheap labour pool for corporate India. In lieu of this, the BJP and the RSS have filled their coffer. The only path left for the people to march ahead is the path of anti-fascist struggle and there’s no respite for the people without an intense democratic struggle against Hindutva fascism to end its tyranny.