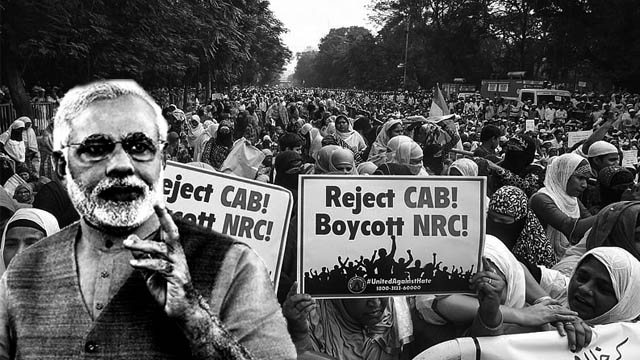 Criticising the opposition over the Citizenship (Amendment) Act, 2019, Prime Minister Narendra Modi, while addressing a rally in Jharkhand on Sunday, 15 December, asserted that the decision is “1000% correct,” and those indulging in arson in protest against the Act “can be identified by their clothes,” slyly blaming the minority Muslim community, which is in the forefront against the unconstitutional law. The Prime Minister’s cunning reference of the minority community under the guise of criticising the opposition is a stark reminder that he and his Bharatiya Janata Party (BJP) are pursuing a notorious agenda to persecute the Muslim community using the National Register of Citizens (NRC) and the Citizenship (Amendment) Act, 2019.

The claim that protesters “can be identified by their clothes,” show how venomously communal the prime minister is and how sinister is his agenda to polarise the Hindus, especially the ostracised Dalits and backward caste people, by portraying the massive struggles waged by the people in Delhi, Uttar Pradesh and West Bengal as mere “Muslim” movements. This will give an ample amount of leeway to the Modi regime in violently suppressing these genuine mass movements by calling them attempts to stoke communal riots.

Modi’s layered blaming on the Muslim community by referring to “clothes” conforms to the propaganda template that the BJP and its parental body Rashtriya Swayamsevak Sangh (RSS) created to polarise the Hindu majority in crucial states like Delhi, Uttar Pradesh and West Bengal.

The recent turmoil in Delhi’s Jamia Nagar, where the Delhi Police brutally assaulted the Jamia Millia Islamia students for protesting against the Citizenship (Amendment) Act, 2019, followed by the students’ movement in Aligarh Muslim University, which also faced the wrath of the state, show how the thread of Islamophobia is connected dot by dot with a plethora of incidents coloured in communal shades. The protest incidents in which the Muslim identity, which is maliciously projected as the “other”, as the villainous force, is involved, are vilified and Islamophobia is generated using them.

In West Bengal, the RSS-BJP is claiming that the arson and violent demonstrations against the NRC and the Citizenship (Amendment) Act, 2019, are done by “illegal immigrants”, who are bound to face the wrath of the NRC. Using the foulest language and choicest abuses, they are vilifying the Muslim residents of the state, especially the Bengali Muslims, by equating them to “illegal immigrants”. By saying this, the RSS-BJP is trying to show that all Muslim movements are illegal and have a purported obnoxious agenda while hiding their own nefarious scheme that plans to strip a majority of Bengalis, mostly Hindus, of citizenship rights. As Muslims can be identified by their clothes, it’s definitely an illegal movement, according to the RSS-BJP, where skull caps and lungis are visible in West Bengal.

As Muslims are in the forefront of a nationwide struggle against the criminal attempt by the Modi regime to disenfranchise them through the NRC exercise and then turn them into aliens in their own homeland, the communal polarisation done by the BJP so far is yielding rich benefits for the party, as the vulnerable poor Hindus, Dalits and tribal people are staying aloof from the movements, considering it a Muslim affair. As Muslims are identified by their clothes, therefore their movements don’t remain kosher for others. The opposition to the Citizenship (Amendment) Act, 2019, isn’t merely a Muslim affair, it’s not that the NRC will only detain people who are identified by their clothes. Rather, these provisions are there to torment the poor — especially backward caste Hindus and ostracised Dalits — and enslave them as cheap labour for India Inc.

Using fake news, morphed photos, fake videos and by curating xenophobic narratives the RSS-BJP and the entire state apparatus of the Modi regime are projecting the Muslims as perpetrators of violence in each incident to vitiate the minds of the common Hindus, especially the poor and lower-middle class Hindus from backward castes, the ostracised Dalits, etc. The communal polarisation drives in Jharkhand and West Bengal have so far paid rich dividends to the BJP and helped it grow exponentially in these states, ending the scope for any other political party to combat its menace. In such a situation it’s imperative to ask a few questions to get to the core of the issue.

Where did the Muslim protesters attack the common Hindus? Who burned the trains or buses in West Bengal and how one identified them? Were they identified by their clothes? If clothes become the key to identification, then isn’t it quite an easy job for the RSS-BJP to pay some money to their local pawns and have them create a ruckus and trigger vandalism wearing a particular set of “clothes”? Why the West Bengal Police, that thrashes brutally any protest rally in the state, allowed these goons a freehand? Was that because the goons were identified by their clothes? Isn’t it possible that the entire administration is carefully creating a narrative that will fan Islamophobia among the Bengali Hindus, especially Bengali Dalits and tribal people, who have been opposing the NRC so far? Isn’t it possible that by intensifying Islamophobia, by citing the “clothes” of those vandalising railway and government properties, the Modi regime can turn the tide in favour of the NRC?

One must remember that the RSS-led Hindutva fascist camp, including the BJP, sits on the largest reserve of unaccounted money in India, and it’s not impossible for it to create narratives, including arson and vandalism by using a set of “clothes” to blame a particular community. The Bengali Muslims are fighting against the notorious agenda of the Hindutva fascist camp to disenfranchise them and evict them from their land. Their struggle in West Bengal isn’t a communal movement, it isn’t demanding separate privileges for the Muslims but equal rights as enshrined in the Indian Constitution. At this point in time, if one goes by Modi’s “identified by their clothes” formula, they will see those wearing the Muslim attire, those chanting Islamic slogans are at the very first place trying to protect the Constitution and the secular values of the country.

After remaining marginalised and gagged for decades, after suffering pogroms, mob lynchings, attack on food choice and even legally losing an ancient mosque that was demolished in full public view, the Muslims now have nothing to lose; they don’t even have the fear for their lives. Their struggle against the NRC and the Citizenship (Amendment) Act, 2019, especially in West Bengal, which is so far not controlled by any political party, will definitely shape itself in the future and if it’s guided by a far-sighted, progressive and anti-fascist political force, then it can definitely defeat Modi’s Hindutva fascist agenda irrespective of how the protesters are identified by their clothes. It’s an ardent task of all democratic, anti-fascist and progressive forces to support the Bengali Muslims, and the Muslims elsewhere in India fighting in their own ways for equality and secularism. Those who will judge the protesters by their “clothes”, like Modi, will commit an act of treason like a real “anti-national”. Such anti-nationals can be easily identified by their clothes as they wear a uniform that’s most infamous for its association with gory atrocities against the minorities. History will definitely repay them using their own coins.