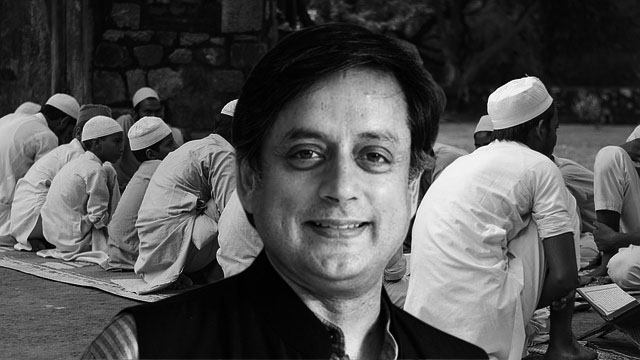 The presence of a large number of Muslims in the mass movements against the National Register of Citizens (NRC) and the Citizenship (Amendment) Act, 2019, or the CAA, has actually created a precarious situation for the Indian liberals, who are basically soft-Hindutva fascism peddlers. Seeing the Muslims asserting their religious identity and faith while combatting the obnoxious agenda of Prime Minister Narendra Modi’s Hindutva fascist regime, these liberals are feeling nauseous.

Shashi Tharoor, the heartthrob of the upper-caste, privileged liberals, criticised the uttering of ‘lā ilāha illā -llāh, muḥammadur rasūlu -llāh — the Islamic declaration of faith (Kalima) — accusing it of giving “comfort to Islamist extremism”. Tharoor tweeted such a bile-inducing statement to show the classical balanced approach of the so-called Indian secular liberals, who have roosted a venomous snake, like the Rashtriya Swayamsevak Sangh (RSS), in their backyard since last one century. Tharoor’s balancing act, his criticism of the Muslims asserting their religious identity sparked outrage and exposed the sheer hypocrisy of such liberals and their university — the Congress party.

Imposing the precondition on the Muslims to shed their religious belief, practices, customs and way of life to embrace Indian secularism, at a time when they are actually vilified and demonised for these very factors, is a mockery of secularism and inclusiveness. Repeatedly, the Muslim people’s faith, their practices and their adherence to their religion are cherry-picked by the Indian elitist liberals who, thereby, aid the Hindutva fascists in projecting the Muslims as a parochial, homogenous and reactionary community. This attack didn’t just originate from Tharoor’s ranting but has repeatedly raised its ugly head to spit venom against the Muslims ever since Jawaharlal Nehru founded modern India in 1947.

A few months ago, when the social-media warriors of Modi’s Bharatiya Janata Party (BJP), the parliamentary wing of the RSS, launched a concerted smear campaign targeting Prophet Muhammad, a revered figure of Muslims, then Umar Khalid, one of the Ambedkarite activists of the 2016 Jawaharlal Nehru University movement, tweeted a few posts to oppose them. Not only he faced the wrath of the Hindutva fascist camp but also a barrage of abuse from the liberals, who criticised him for standing for his identity. They called the defence of Muhammad unsecular and such attacks made Khalid write a piece in The Print, criticising those who opposed him.

The same situation is repeated now, ever since the Muslims came out to protest on the streets, especially after the police atrocities on the students of Jamia Millia Islamia University and Aligarh Muslim University on 15 December 2019. The so-called secular brigade, which mostly consists of elite, privileged upper-caste Hindu leaders of the Congress party and its allies, started advising the Muslims to refrain from violence and to remain irreligious. They showed the audacity to advise the Muslims, who have been facing police brutality, state terror and smear campaigns run by the RSS-BJP and Modi’s toady press, to refrain from flaunting their religion, which actually is an anti-secular demand. This sheer intolerance towards Muslims asserting their identity is a manifestation of the truth that the mainstream secular block is actually the closeted communal block, the B-team of the RSS-BJP.

Take Tharoor for example. An Oxford alumnus, Tharoor is also a member of Parliament (MP) of the Congress party from Kerala and a celebrity writer. Before becoming an MP and a blue-eyed-boy of the liberals, he had a stint at the United Nations (UN). At the UN, during Dr Manmohan Singh’s regime, Tharoor played a pivotal role in turning India into an appendage of US imperialism and brought it closer to the Zionist Israeli terrorists. Apart from doing such power-brokering job, Tharoor wrote extensively on Hinduism to whitewash the gory caste apartheid and glorify Brahminical hegemony. He also opposed the entry of women in Sabarimala Temple of Kerala after the Supreme Court removed an old ban in 2018.

If hypocrisy has a third name after being eponymous or Modi, then it must be known as Tharoor. It’s his sheer hypocrisy over religious identity, his blatant Brahminical bigotry and his myopic vision that made Tharoor criticise the Muslims asserting their identity reciting the Kalima. Criticising a random Muslim reciting the Kalima, calling them “extremists” and fanning Islamophobia in a polished and elegant manner are some pieces of evidence of Tharoor’s closeted Sanghi mentality.

At a time when Muslims find themselves persecuted not just in India but throughout the world, from Palestine to Yemen, Myanmar to Libya and Kashmir to Iraq, then they cling to their religious identity more firmly than ever as it provides them with hope and resilience in difficult times. As the state’s repression on the Muslims have reached its pinnacle in India, starting from mob lynching over the food choice of the community to the present state-sponsored terror on them in the BJP-ruled states like Karnataka and Uttar Pradesh, especially when in the latter, the policemen are brutally torturing anyone between 12 and 82, vandalising and robbing homes, imposing hefty extortion amount as penalties and sexually assaulting women, forget the illegal detention and mass arrests of hundreds of Muslims, then asking the Muslims to maintain restraint, to not assert their religious identity, to not utter their religious hymns or to not follow their faith is a blatant display of antipathy towards their agony.

It’s a fact that all religions are opium for the masses and are used to keep their revolutionary potential locked. It’s a fact that any revolutionary people’s movement will face strong challenges from the organised religions. Yet, it’s also true that in terms of religious fundamentalism and fanaticism, which often misguides the revolutionary zeal of those who oppose injustice, there is a stark difference between majoritarian communalism and oppressed minority’s resistance to such communal bigotry. Muslims asserting their identity in the present struggle against Modi’s tyrannical NRC and CAA is not a reactionary act, rather, it’s an act of resistance as their very religious identity is considered as an enemy by the regime. It may not be the exact solution to the bigotry and terror the community is suffering, but in the present condition, it’s an act of defiance by the largest persecuted minority group in India. To oppose the Muslims asserting their identity isn’t liberal but a truly fascist act, which Tharoor has committed.