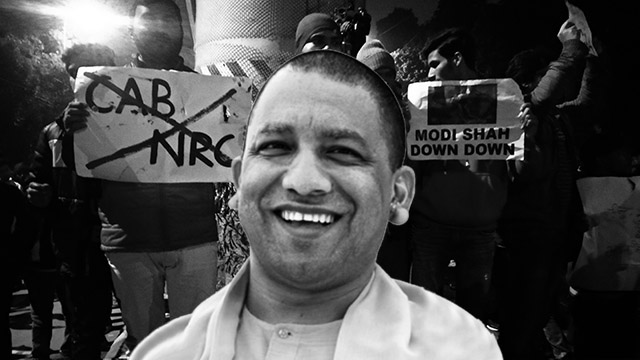 Since Friday, 20 December 2019, the Bharatiya Janata Party’s (BJP) Ajay Bisht aka Yogi Adityanath-led regime has started committing macabre atrocities against the Muslims of Uttar Pradesh, accusing them of vandalism and rioting, for protesting against Prime Minister Narendra Modi’s contentious Citizenship (Amendment) Act, 2019, or CAA and the National Register of Citizens (NRC). Though it was the Uttar Pradesh Police and the Rashtriya Swayamsevak Sangh (RSS) cadre who instigated violence during the 20 December rally in around 15 districts of the north Indian state, the Muslims were blamed for the ruckus and suffered brutal persecution. So far, according to reports, 19 Muslims have been killed during the state-sponsored rampage, out of which 14 died due to bullet injuries. Though the Uttar Pradesh Police denied firing at the protesters, the photographic and video evidence negate their claims.

Apart from shooting innocent men to death, the atrocities against the Muslims of Uttar Pradesh also include vandalism, robbery and sexual assault by the police. Reports say 1,113 people are arrested, 5,558 are under preventive detention, while FIRs are filed against more than 25,000 people. There are incidents of children being tortured by the feral Hindutva-incensed bigoted policemen, who second as RSS activists. The policemen chanted Hindutva fascist slogan “Jai Shri Ram” (Hail Lord Rama) while torturing the Muslims and told them that they have either Pakistan or Kabristan (graveyard) to choose from. The police arrested 124 people throughout the state for exposing the atrocities against the Muslims of Uttar Pradesh on social media, while more than 19,000 accounts are reported by the police and the RSS.

These macabre atrocities against the Muslims of Uttar Pradesh by Bisht’s regime started after he vowed “revenge” accusing the Muslims of vandalism. The state-sponsored rampage is carried out with utmost impunity, and even the courts have turned deaf to the wailing of the victims. The Hindutva fascist rabble-rouser monk-turned-chief minister is using the opportunity to polarise the upper-caste Hindu supporters of the RSS-BJP behind the obnoxious agenda of the Indian ruling classes to disenfranchise millions of people through the NRC and the CAA. The utmost unconstitutional act of “revenge”, the confiscation of properties of people, imposing arbitrary penalties without providing any legal recourse to the citizens show how deeply the Bisht-led Hindutva fascist regime is indulged in a communal vendetta against the citizens.

How the BJP’s Bisht regime is flouting all constitutional norms and regulations to carry out a vendetta with sheer impunity can be understood from the complex class and caste equation of Uttar Pradesh. According to The Hindu, CSDS-Lokniti post-poll survey in Uttar Pradesh, after the 2019 Lok Sabha election, it was found that 81.25% of the upper-caste Hindus — the feudal landlords, usurers, bureaucrats, power brokers and capitalists — voted for the BJP. The agrarian Jat community’s 91% voters supported the BJP, while 48% Dalits sans the Jatavs and 72% other backward castes (OBC) sans the Yadavs and 80% Kurmi and Koeri communities voted for the BJP. The survey also found that it was the Modi factor that won the BJP a massive victory as if it wasn’t for Modi, the BJP would’ve got 12% fewer votes. Plus, the survey also showed that even within the BJP voters from the OBC communities and Dalits are angry over the state government’s performance. While 28% of the respondents claimed that they would want Akhilesh Yadav back as the chief minister, only 27% supported Bisht.

The rising unpopularity of Bisht’s regime has panicked the hate monger and his coterie, as they fear losing power in the 2022 Uttar Pradesh assembly election that’s two years away. There has been large-scale anger within the BJP’s legislative party over Bisht’s way of functioning, and recently his party’s legislators have protested against his government’s highhandedness inside the state assembly. Due to such serious threats to his political career and prospects of him running for the prime minister’s position after Modi’s retirement, Bisht is desperate to establish himself as a tough administrator, which he isn’t. Bisht knows that if his regime commits atrocities against the Muslims of Uttar Pradesh using the bigoted police — as only upper-caste Hindus are allowed to lead the force consisting of mainly Hindu men from feudal backgrounds — then it will be easy for him to combat the high level of anti-incumbency that’s growing in the state.

Bisht has the plan to use the optics of his government’s goriest atrocities against the Muslims of Uttar Pradesh to appease the Islamophobic, politically-crucial, upper-caste Hindu elites, feudal landlords and urban middle class. The utmost failure of the government in all fronts, from agriculture to job creation in industries, from education to public healthcare, is now an Albatross around Bisht’s neck and he has to pick up his favourite punching bag — the Muslims — to repel off the attacks launched on his regime by the political opponents.

Forgetting the facts that the Bajrang Dal leaders accused of killing Inspector Subodh Kumar Singh in December 2018 are out on bail and their properties aren’t sealed as threatened by the police last year, that his own militant force, the Hindu Yuva Vahini, set Varanasi on fire on 5 October 2015 and vandalised public property, without him paying a penny as compensation, Bisht is trying to create narratives that can safeguard his own weak position within the RSS-led ecosystem. The talks about punishing perpetrators of violence are all filled with sheer hypocrisy and they attempt to hoodwink the people.

One who believes in democracy, constitutional mechanism, the rule of law and adheres to secularism, can’t endorse the macabre atrocities against the Muslims of Uttar Pradesh committed with sheer Islamophobic fervour. However, to expect that either Bisht or his feral Hindutva-incensed upper-caste policemen, who are openly asking Muslims to go to Pakistan like any knicker-clad RSS apparatchik, will respect the Constitution and follow the course of law, is quite an infantile wish. What can now save the Muslims of Uttar Pradesh from the ordeal is an intensified struggle by the secular, democratic and anti-fascist forces throughout India in solidarity with them against BJP. Only a vehement people’s opposition can force the Bisht regime to capitulate, any attempt to negotiate a settlement with his regime will only damage the people’s cause. It’s a challenge thrown at the Indian people and they must fight it back resolutely.