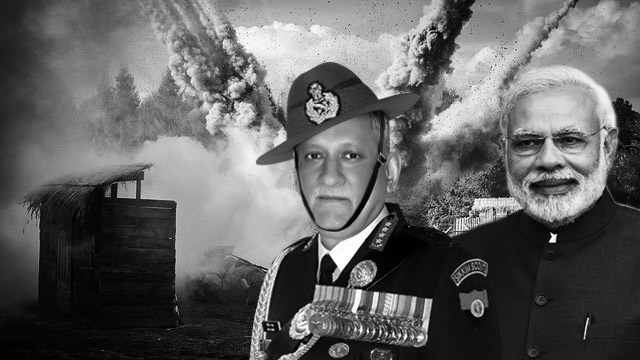 There is an imminent threat of a war or a border skirmish with Pakistan looming large over India, as General Bipin Rawat recently warned. Gen Rawat warned that the situation at the Line of Control (LoC) — that divides Indian and Pakistani-occupied Jammu & Kashmir — can escalate anytime. He, of course, blamed neighbouring Pakistan for the escalation. Recently, the Indian government informed the Parliament that the Pakistani side violated the LoC ceasefire 950 times between August and October 2019. This warning of a military escalation at the LoC will help Prime Minister Narendra Modi and his Bharatiya Janata Party (BJP) to distract the people’s attention from the ongoing nationwide people’s movement against the anti-constitutional Citizenship (Amendment) Act, 2019 (CAA), and National Register of Citizens (NRC), which aim at disenfranchising the Muslims and torment the poorest of the poor.

It must be remembered that the BJP and its parent body Rashtriya Swayamsevak Sangh (RSS) survive on anti-Pakistan and Islamophobic hyper-masculine chauvinism. The BJP had won elections in the past by playing the Pakistan card, which easily captivates the upper-caste Hindu elites and urban middle class — the politically-crucial classes — and its ripples discombobulate the working class and peasantry, cajoling them to support the Hindutva agenda too. History is a witness that military escalation at the LoC is always a magic wand for the BJP to sweep elections.

After allowing infiltration of Pakistani Army regulars dressed as Kashmiri Mujahideens for months in Kargil and Dras sectors of erstwhile Jammu & Kashmir, the Atal Bihari Vajpayee-led National Democratic Alliance (NDA) government launched a military offensive only when it lost majority in the Lok Sabha and a new election became imminent in mid-1999. Riding a wave of chauvinism, the NDA led by Vajpayee returned to power, as people overlooked the gross economic mismanagement, inflation and anti-people policies of the government since they got enchanted by the sheer jingoistic propaganda over military escalation at the LoC.

When Modi and the NDA led by him didn’t have an issue to garner people’s support before the 2019 general election due to the Rafale Jet scam, rising unemployment, disastrous economic decisions like demonetisation and Goods & Services Tax, which led to the incessant fall in the GDP growth rate, he played the Pakistan card to stoke xenophobia and jingoism once more. By using the militant attack on an armed juggernaut of a paramilitary convoy in Pulwama, South Kashmir, on 14 February 2019, the RSS-BJP stirred xenophobic hysteria against Kashmiris all over India. The Pulwama attack helped Modi to rally fearful upper-caste Hindu elites and middle class behind him. The jingoistic rhetoric made military escalation at the LoC imminent between India and Pakistan.

Then the much-hyped Balakot surgical strike took place, in which Modi claimed more than 300 terrorists were killed, but the international media showed only a few trees fell and a crow was killed. The resultant air raid from Pakistan, combatting which an Indian Air Force plane was shot down by Pakistani air defence and an Indian pilot, Abhinandan Varthaman, was arrested by Pakistan and later released, amidst high voltage drama between two nuclear power neighbours of South Asia, also triggered military escalation at the LoC. The propaganda over Balakote, the incessant brainwashing of susceptible minds with jingoistic content, especially over social media platforms and through toady media outlets, helped Modi to sweep the Lok Sabha election confidently. Actually, Modi won the Lok Sabha election riding Islamophobic, hyper-nationalist wave of support, which helped him and his government to implement some of the nefarious schemes that the RSS-BJP promised for years.

The brutalisation of Kashmir through a four-month-long blockade, the construction of Hindu deity Rama’s temple at the place of a demolished 15th-century mosque and now, finally, the attempt to conduct a nationwide NRC to create a large pool of stateless Muslims, Dalits, backward caste Hindus and tribal people, who will be used as modern, rightless slaves for the corporate houses, all long-term plans of the RSS-BJP are implemented, one at a time.

The bait of the CAA will be dangled before the non-Muslim stateless, hapless poor to hoodwink them and then neutralise their potentiality to combat the Hindutva fascist regime. This divisive law, which actually helps only 31,313 refugees and causes severe problems for the entire nation, is now the bone of contention between the majority of the people on one hand, and the RSS-BJP on the other.

Can a major mass movement, which mobilised the common people to hit the streets and demand equality and constitutional rights, be thwarted so easily by the Modi regime using the trump card of a military escalation at the LoC? Has Rawat’s claim of an imminent military escalation at the LoC set the context for a future conflict between India and Pakistan? Will such a confrontation again polarise the upper-caste Hindu elites and middle class behind the Modi regime and the NRC and CAA issues will be pushed to the oblivion?

There are immense possibilities of these coming true. There are high chances that military escalation at the LoC will be used as a weapon by the Modi regime to neutralise the opponents and the people on the streets, and, thereby, label any criticism of the government as “anti-national” and mobilise the jingoistic mob violence against the critics. That will be a real threat to the unity of the nation.

Thus, in order to protect the harmonious unity between the people who came out on the streets of India against the Modi regime, it’s important that the democratic and anti-fascist forces educate the common people about Modi’s conspiracy to use a military escalation at the LoC to redefine the political course and safeguard itself through fencing. Peace, equality and justice must be the demand of the democratic forces protesting a plethora of laws regarding the CAA and the NRC, and it’s important that under no circumstances, the people stop seeing the Modi regime for what it’s — a sheer Hindutva fascist regime.