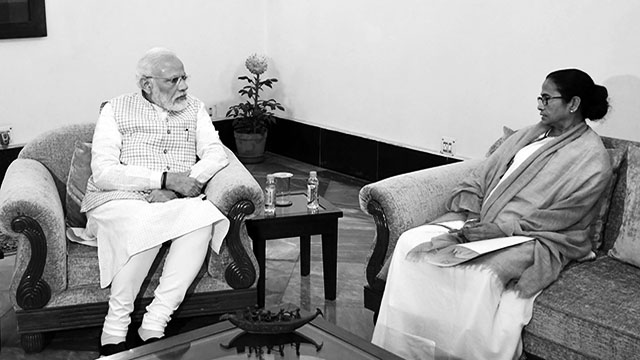 There is an upheaval in West Bengal as Chief Minister Mamata Banerjee is consistently displaying, through a myriad of her actions, that she and her Trinamool Congress (TMC) are in cahoots with Prime Minister Narendra Modi and his Bharatiya Janata Party (BJP), especially after the latter’s recent controversial Kolkata tour on 11-12 January 2020. Banerjee met Modi at a closed-door meeting organised by Governor Jagdish Dhankar in the Raj Bhawan. What Banerjee, who has been a vocal critic of Modi’s policies, especially the contentious Citizenship (Amendment) Act, 2019, or the CAA, the National Population Register (NPR) and the National Register of Citizens (NRC), discussed with Modi, is not revealed, yet, her meeting with the prime minister spoke of numerous possibilities. Her critics called it the unveiling of a BJP-TMC secret alliance in West Bengal.

The progressive, democratic and anti-fascist students of Kolkata came out on the streets and created a blockade to prevent the prime minister’s entry into the city. The brave student and youth laid a siege of Kolkata’s roads for two days and forced a visibly-scared Modi had to travel in a helicopter within the city, exhibiting his sheer cowardice. Though Banerjee’s government and TMC use anti-Modi and anti-BJP rhetorics at times, it was her police that unleashed brutal violence against student activists at Bag Bazar Ghat who showed black flag to Modi when he was travelling in a steamer through the Hooghly river.

The police also filed charges against 150 “unidentified” students for breaking barriers near Banerjee’s TMC’s student demonstration and reaching close to the dais to question the chief minister with absolute courage. The “unidentified” clause is used to charge anyone later, as per convenience, to ensure that the opponents of Banerjee in the democratic and anti-fascist political space are intimidated. The leftwing students reaching close to Banerjee’s dais and questioning her about BJP-TMC secret alliance in West Bengal is a new and promising event.

Banerjee’s government’s hypocrisy and the BJP-TMC secret alliance in West Bengal is also visible in the hostility shown by the Kolkata Police and Kolkata Municipal Corporation (KMC), both controlled by the TMC, towards the brave women’s movement of Park Circus. As hundreds of women are peacefully organising a sit-in demonstration against the CAA-NPR-NRC in Park Circus ground, owned by the KMC, the police and the authorities are constantly threatening them of forceful eviction. The KMC even denied the permission to erect a tent for nine days, forcing the women of Park Circus to continue their valiant protest under the open sky. There is no intervention from Banerjee or her TMC’s top leadership to ensure that these women, mostly Muslims from the locality, do not suffer during their protest demonstration and can at least have a tent erected.

While Banerjee herself is taking the lead in the anti-CAA-NPR-NRC rallies, while her government has officially postponed — and not cancelled, as a state government can’t — the NPR process, which is the first step towards the NRC, she has denied any scope for the opposition to organise movements against these draconian projects of the Modi regime. Banerjee also didn’t take part in an anti-CAA-NPR-NRC meeting organised by all political parties of the opposition in New Delhi.

The sole purpose of Banerjee’s vigorous attempts to retain the leadership of the anti-CAA-NPR-NRC movements, in which the local Bengali Muslims have participated in large numbers, is to ensure that there are no anti-fascist, democratic and progressive leadership to lead these movements to a victorious conclusion. Her hijacking of these movements using her charisma and state power is an attempt to sink the heroic struggles in the mire of capitulation and sell-off the ideology of resistance in return of crumbs from the Modi regime.

Exhibiting her command over the loyalty of Muslims in West Bengal, where the community is 27% of the population, Banerjee is seeking better bargaining opportunities with Modi and the BJP to dilute the corruption charges against her government and top TMC leaders. Neither Banerjee has any serious motive to fight the CAA-NPR-NRC nor she has any intention to cause ignominy to the Modi regime or the BJP. Rather, it’s a clash of selfish interests and bargaining for power and crumbs by utilising the people’s genuine movements. Knowing well that the BJP is in a position to rout her out of power in 2021, Banerjee is frantically trying to retain her command and it won’t matter to her if she can utilise the anti-CAA-NPR-NRC platforms to strengthen the BJP-TMC secret alliance in West Bengal and protect her rule through secret understandings.

The BJP-TMC secret alliance in West Bengal is a two-decade-old affair. Since Modi’s ascension to power in 2014, the BJP is using the volatile atmosphere of West Bengal, the deeply-rooted Islamophobia among the caste Hindu Bengalis and the plight of a large number of ostracised Bengali Dalits, ie, Namasudras, to polarise a Hindu vote bank and the recent Lok Sabha election results show it has achieved success in doing so. Banerjee is merely duping the Muslims and secular Bengalis with anti-Hindutva rhetoric, while her government and its actions are strong enablers of fascism in West Bengal. The only forces that can actually take the genuine uprisings against the Hindutva fascist BJP and the CAA-NPR-NRC are the anti-fascist, progressive and non-parliamentary left forces, on whom Banerjee’s government has been unleashing brutal state violence.

Until Banerjee commands the anti-CAA-NPR-NRC movements and her opponents remain marginalised, there are fewer chances for the anti-fascists to win any significant victory against the Hindutva fascist Modi regime. The Muslims, Namasudras, tribal people and backward caste poor Hindus will remain divided and will be duped by Banerjee, while the BJP will be allowed to entrench deeper into these communities to polarise West Bengal’s politics on religious lines. It’s imperative for the genuine anti-fascist, progressive and democratic forces to incessantly unveil the obnoxious BJP-TMC secret alliance in West Bengal and highlight the dire need to combat both Hindutva fascism and its secret ally TMC and Banerjee for a decisive victory.