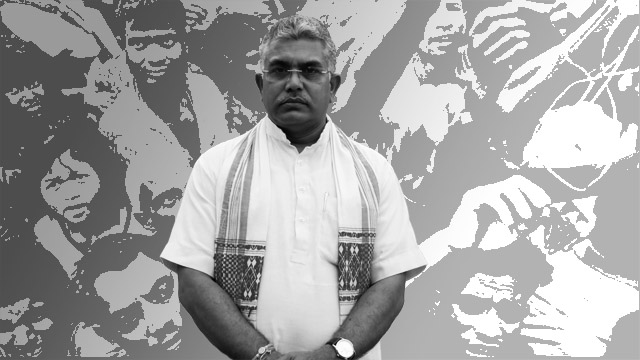 The political compulsions of Bharatiya Janata Party (BJP) politicians to keep their feral, radicalised supporters and workers on the highest pinnacle of communal motivation make them utter things that entangle them in a complex web of things. West Bengal BJP chief Dilip Ghosh is known for his choicest expletives and occasional faux passes, and he didn’t disappoint his supporters when he went to Barasat, North 24 Parganas district, on 19 January 2020. Ghosh said that 10m “Bangladeshi Muslims” will be sent to Bangladesh through the National Register of Citizens (NRC) exercise.

Though his statement supports what Home Minister Amit Shah has repeatedly claimed in the past to titillate the hardcore Islamophobic support base of the BJP, it ironically goes against Prime Minister Narendra Modi‘s assurance that his government didn’t moot the idea of conducting an NRC out of Assam. Modi countered the NRC accusations during the BJP’s rally in favour of the Citizenship (Amendment) Act, 2019, or CAA, at Delhi’s Ramlila Maidan a month ago.

While the BJP and Shah have been literally toiling to add credibility to what Modi uttered at the BJP rally, by often licking their own saliva, the claim by Ghosh, after his infamous gloating over the state-sponsored killing of Muslim protesters in Uttar Pradesh, triggered another round of uproar as the cat once more managed to sneak out of the bag.

Who are these 10m “Bangladeshi Muslims” whom Ghosh, who can’t speak Bengali properly due to his upbringing by non-Bengali Rashtriya Swayamsevak Sangh (RSS) volunteers, wants to send to Bangladesh? They are the Bengali Muslims, the community that’s vilified by the RSS and its progeny organisation as Bangladeshis not just in their strongholds in northern and western India, but also in West Bengal itself, where a large section of the Bengali upper-caste Hindus, ostracised Bengali Dalits (Namasudras) and tribals have been radicalised by the saffron camp’s incessant xenophobic propaganda. The Bengali Muslim community have been domiciles of West Bengal since time immemorial and is 27% of the state’s population of 90m.

This means, 10m out of 30m total Bengali Muslims, ie, one-third of total Bengali Muslims, who are socio-economically marginalised, will be tormented for their identity as without any evidence Ghosh and his RSS handlers have stamped them as “Bangladeshi infiltrators” whose actual number isn’t known to the Ministry of Home Affairs, as per a recent Right to Information (RTI) request by India Today. The entire xenophobic campaign of the RSS, over “illegal Bangladeshi infiltrators“, which was communalised from the 1970s onwards, is based on sheer propaganda. In this article, we have shown how, according to the United Nations’ report, the number of actual illegal and legal immigrants in India is falling since the 1990s, while it’s increasing in Bangladesh.

Ghosh is now desperate to win the 2021 West Bengal assembly elections using the communal polarization that yielded rich dividends to the BJP in the 2019 Lok Sabha election, in which the party raised its vote share to 40% from 18% in 2014 and its seat share to 18 from two in 2014. The BJP has been capitalising on the anti-Trinamool Congress (TMC) vote share, eating upon the CPI(M)-led parliamentary left’s vote share, which helped it grow exponentially due to its hold on central power as well as due to its ability to communally polarise upper-caste Hindus and Namasudras, especially the Matua community.

Now that the BJP is misleading the Hindus, especially Namasudras, into believing that the NRC exercise is going to only affect the Bengali Muslims — portrayed as a purported enemy of the Bengali Hindus — the marginalised community, consisting of a majority of refugees, is going to face major trouble. It’s they who will eventually face utmost difficulty in getting citizenship as the CAA doesn’t guarantee them any respite, as most of them didn’t record “religious persecution” as their reason behind fleeing to India from former East Pakistan or modern Bangladesh. The over-enthusiasm over the CAA will disenfranchise them and make a large number of them, along with the aboriginal people living in the underbelly, stateless.

Though Ghosh and the entire cavalcade of Hindutva fascist leaders, who are attempting to titillate the Dalits and tribals with sheer Islamophobic rhetoric, have been projecting the NRC as an anti-Bengali Muslim exercise to ensure that the non-Muslims do not oppose the act vehemently or participate in the massive movements against the CAA-NRC. Though the Assam NRC exercise has clearly shown how 1.2m Bengali Hindus, especially those who belong to the Namasudra and backward castes, have been excluded from the NRC. With the majority of those who died in Assam’s infamous detention centres situated inside jails being Bengali Hindus, it’s an eerie and vexing alarm for the Bengali Hindus, especially the Namasudras, the Matuas, the Nomos, etc, to wake up to the fact that the NRC will eventually target them and disenfranchise them more than what it will do to the Muslims.

It’s sheer hubris that’s making Ghosh and the BJP act with utmost impunity in West Bengal. The BJP is considering its victory in the 2021 assembly election a certainty. Also, as the TMC supremo and West Bengal Chief Minister Mamata Banerjee is in cahoots with the Modi regime and is trying to peddle the NRC agenda through backdoors while hoodwinking the people with a facade of protests, the saffron camp didn’t face any real challenge in the state. The rise of a free, leftwing, secular and strongly anti-fascist movement against the CAA-NRC has jolted the BJP and Ghosh badly. Such consolidation of people’s power against the Hindutva fascist forces will actually cause irrecoverable damages to the BJP and its aspirations, which will rupture Ghosh’s intention to intensify communal polarisation in West Bengal. The defeat of the Hindutva agenda at an ideological and organisational sphere will eventually help to consolidate the people’s rule, secularism and democracy.