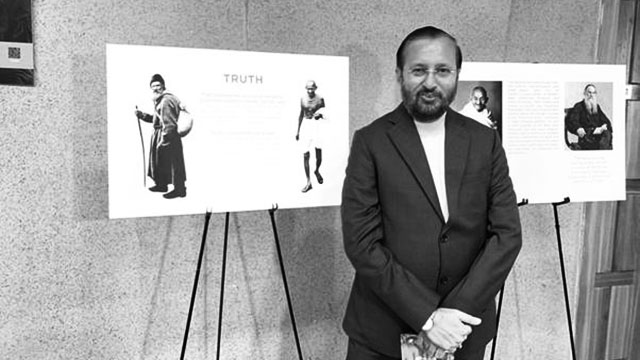 Brainwashing susceptible sections of the people by twisting facts is quintessential of fascism, which Prime Minister Narendra Modi-led Bharatiya Janata Party (BJP) regime never fails to exhibit. When Union minister Prakash Javadekar criticised the Congress party and the Aam Aadmi Party for the Shaheen Bagh protest in southeastern Delhi and said that people are demanding “Jinnah wali Azadi” (the freedom like MA Jinnah or secession from India) at the protest venue and these parties are supporting them, then not only did he blatantly lie but also turn the house upside down to match the narrative of the Hindutva fascist constellation headed by the Rashtriya Swayamsevak Sangh (RSS). Javadekar’s “Jinnah wali Azadi” ranting on Shaheen Bagh is old wine in a new bottle, which equates the Indian Muslims as frantic supporters of Jinnah’s Pakistan movement.

No wonder, at a time when the Indian Muslims are upholding the tricolour and the Constitution, to fight against the obnoxious communal agenda of the RSS and to retain India’s promised secular character, which was flushed down the annals of history long time back, accusing them of demanding secession from India, accusing them of demanding partition is the new nadir the Hindutva fascists like Javadekar can stoop to. Javadekar’s “Jinnah wali Azadi” ranting on Shaheen Bagh exemplifies the sheer frustration in the RSS-led Hindutva fascist camp and how the Modi regime and the BJP are facing severe political crisis in handling a situation where Muslim women, projected by the RSS-BJP as enslaved by Muslim patriarchy until a few months back, have come to the forefront to reclaim the rightful place of the community in the country that it helped to build through its labour and blood.

Why would the Muslims, who are since fighting against the Modi regime’s divisive agenda of using the Citizenship (Amendment) Act, 2019 (CAA), and the National Register of Citizens (NRC) to create a huge pool of disenfranchised poor people, especially from the marginalised Muslim, Dalit, tribal, etc, communities, will raise the demand for “Jinnah wali Azadi”, when Jinnah’s “Two-nation Theory” – rooted in the notorious theory of Hindutva fascism’s pioneer VD Savarkar – is refuted by them through their clinging on to the idealist secular idea of an India that Jawaharlal Nehru, BR Ambedkar and others had envisioned? The Muslims have been betrayed repeatedly under the guise of secularism in India; they have not only lost the equal status in society during the last 70 years of the so-called Republic but they have also lost the basic human dignity due to extreme bigotry and exclusionary policies adopted by the Indian state, which is extremely Brahminical in character.

From losing thousands of lives in communal violence, from losing the Babri Masjid – a 15th-century mosque in Ayodhya demolished by Hindutva-incensed feral thugs in 1992 –   whose land was handed over to the Hindutva fascists accused of demolishing it by the Supreme Court in a recent verdict, the lynching of hapless poor Muslims accused of consuming beef or transporting cattle by the Hindutva fascist thugs to the incessant vilification of the Muslim identity, denial of decent housing, employment and other opportunities to the community, the Muslims have suffered a lot under the veil of secularism. Yet, none of them demanded secession from India. They are fighting for their rights within India, as equal citizens, even though the ruling party, the press and the state machinery accuse them of being Pakistan loyalists, terrorist sympathisers, etc, to tighten the grip of Islamophobia on susceptible Hindu people.

Even when the Modi regime categorically excluded the Muslim community from the list of persecuted refugees from neighbouring Afghanistan, Bangladesh and Pakistan who can seek citizenship under the CAA, the Muslims didn’t demand “Jinnah wali Azadi” but the Azadi of Bhagat Singh, Ambedkar, Jyotirba Phule, Ramprasad Bismill and Ashfaqullah. This is what the BJP and the RSS can’t digest. Hence we come across Javadekar’s “Jinnah wali Azadi” ranting on Shaheen Bagh, with which he cleverly juxtaposed the Hindutva fascist slogan “Bharat Mata ki Jai” (hail the India goddess) to add further communal tinge.

Azadi, which in Urdu means freedom, was the lifeline of India’s anti-colonial struggle. Even in the post-colonial period, it was the idea of protecting the Azadi that one got by fighting a brutal colonial regime – a struggle in which the RSS and Hindu Mahasabha took the side of the oppressors and betrayed the people – which mobilised the people to safeguard their rights and fight for democracy, equality and liberty, whenever sclerotic regimes launched vicious attacks on them. From the anti-Emergency movements in the 1970s, from which the RSS regained prominence in post-colonial India, to the movements against the corporate aggression on water, forests and land of the tribal people throughout the 21st century, the people’s struggle for Azadi never ceased. From fighting against Indian military occupation in Kashmir to the struggle against the corporate aggression on the green covers of India, Azadi remained an inspiration, a dream that the collective will of the working class, the peasantry and the oppressed people want to realise.

A frustrated Javadekar’s “Jinnah wali Azadi” ranting on Shaheen Bagh shows how the Modi regime, which was, until yesterday, driven by utmost hubris and was planning to turn India into a Hindu Rashtra (Brahminical theocratic state) by 2022, is now scared and shuddering even at the slightest movement of leaves. This fear, which they tried to instil upon the Indian people, especially the poor and marginalised Dalits, tribals and minority communities, particularly the Muslims, is engulfing them and as a panicked entity, scared of losing its hegemony, it’s trying all weapons in its arsenal to build up a momentum against the brave women and men fighting against its obnoxious agenda. Despite Javadekar’s ranting and the BJP’s incessant vitriolic propaganda, the slogan of Azadi will epidemically spread and become the identity of the Indian people’s movement against tyranny and Hindutva fascism.