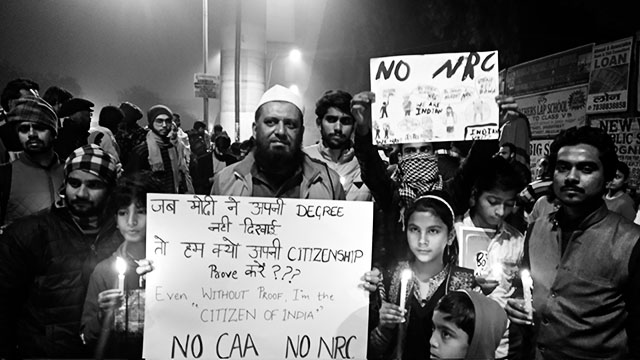 The advocates of the Rashtriya Swayamsevak Sangh (RSS) — the knicker-clad fascist fountainhead of global Hindutva fascism — accuse the left and the secular-democratic camp of allying with the Muslims against “Hindu interests” without ever providing any evidence to back up their claim how these two camps are strengthening Islamists in a predominantly Hindu India? Hearsay, bush telegraphs, libellous accusations and unbridled character assassination of the leftwing politicians through smear campaigns are only placed on the table. Yet, some very enthusiastic friends in the left either consider debate and discussions as effective weapons to fight Hindutva fascists who are on a rampage or try sermonising the Muslims to do a tight-rope balancing act, to prove themselves just and balanced. Often such sermons end up telling Muslims to not carry their Muslim identity unapologetically during a public discourse on politics or even in protest rallies.

Since Prime Minister Narendra Modi said that those who are rioting against the contentious Citizenship (Amendment) Act, 2019, or the CAA, and the National Register of Citizens (NRC) can be identified from their clothes, a gang of ultra-liberal democrats who identify themselves as the left — possibly of Modi’s or the RSS’s — have been demanding that the Muslims exhibit some sort of secularism and restraint, that they refrain from exhibiting their Muslim identity in public. But why? It’s said that their Muslim identity can embolden Islamist reactionaries!

Who were those Muslims whose lynching by the Hindutva fascists got normalised in the last six years of Modi’s Bharatiya Janata Party’s (BJP) rule? They were the welding workers, plumbers, dairy farmers, poor students or labouring peasants. From Muhammad Akhlaq to Afrazul Shaikh, from Pehlu Khan to Tabrez Ansari, all of them came from toiling background, selling their labour to earn a decent meal. Our Muslim citizens’ blood connects to The Great Rebellion of 1857 against the notorious strategy of British colonial rulers to divide the country into religious lines. The blood of the victims of lynchings can be connected with the blood of those Muslim martyrs and their Hindu brethren who fought together against British colonial rule and were killed.

Religion and caste, these two strings were played by the British colonial rulers, which were later adopted by their Indian comprador-feudal successors. MK Gandhi to Rajiv Gandhi, from PV Narasimha Rao to Manmohan Singh, from Atal Bihari Vajpayee to Modi, all of them used religion and caste as their trump cards. Many prominent Indians spoke about apartheid in western countries or South Africa, but not about caste apartheid, social exclusion and institutional murders in India; they maintained a conspicuous and ominous silence over the issues like caste system and caste oppression.

The Brahminical hegemony got naturalised through institutional adaptation and absorption. On the other hand, Islamophobia, a colonial project, was legitimised by institutions to regularise targeted exclusion of Muslims, which is now converted into an openly targeted killing by the most unapologetic servile lackey of global finance capital and its Indian crony-comprador agents. The elimination of Muslims from any institutional corridors of power gave rise to alternative stratification.

When a Muslim youth’s activity becomes outlawed in this society the majority doesn’t even think for a moment that it’s the Hindus who are socially represented everywhere, from army to police, from bureaucracy to lectureship, still, their Islamophobia makes them scared of the ‘unwanted people with beard’ indulged in ‘unlawful activities’ to ‘colonise’ or ‘split’ the country. These are the same Hindutva-incensed thugs who bend in front of foreign corporate criminals to legitimise colonial oppression and loot of India.

Foreign intrusion and the occupation policy of the global monopoly and finance capital only sharpen the revolutionary crisis by drawing people into the struggle by physically extending the area of the revolutionary battle with murderous imperialism.

Now that there is an ardent need to build a common camp of struggle there’s a need to be aware of the post-October Revolution scenario in Russia. One must revisit the question of “emancipating nation colonies and semi-colonies from the workshop of imperialism“.

There is an inseparable link between the national question and the question of political power. The Brahminical tendency to confine it within the cultural and educational question is leading the people to be enslaved by foreign monopoly-finance capital. At a time of medicated, vulgar nationalism of the Hindutva fascist state, the politically-conscious people have to decide whom their nationalism stands with. Is it the nationalism of Ambani-Adanis or of the peasants tilling the fields — who are institutionally getting murdered due to state made inflation — or the workers of the locked-out factories post-demonetisation exercise that was brought in to kill Indian people and strengthen crony capitalism?

The othering of the Muslims isn’t merely a short-term project, but a long-term one. The Muslims aren’t merely made punching bags for the RSS men, high on the patriotism of the Hindutva kind, rather they are made enemies of the Indian state. Therefore, one can see how Hindu detainees and Muslim detainees have been treated differently when they were detained and kept in police custody. The incidents of gory atrocities that Sadaf Jafar, a prominent Congress party leader from the Muslim community, was subjected to due to her identity during her captivity at Hazratganj Police Station, exemplifies how a section of the Indian society are pushed towards extreme oppression and persecution just because of their immediate identity, their Muslim identity.

The RSS and the BJP aren’t alone in this heinous project to systematically other and exclude the Muslims from India’s mainstream, to deny them employment opportunities, educational opportunities or other socio-economic opportunities for their overall growth, the Congress party and all so-called secular parties of the mainstream are actually equally culprit in this exercise of dehumanising of the Muslim community. The RSS and the BJP, flaunting their allegiance to the Hindutva philosophy, declare the Muslims as their enemies at various occasions and effectively draft laws to constraint and persecute the community.

The Congress party and other so-called secular parties, including a plethora of faces joining the present movements against NRC and CAA with statutory non-violence tags, have been the biggest conspirators who degraded the status of the Muslims effectively since 1947 to mock the decision of India’s largest minority group to not migrate to Pakistan, a country exclusively carved out for the Muslims after British-ruled India was partitioned. It’s the Congress party and many of its present allies and so-called secular forces who have enabled Hindutva fascism through their softcore Hindutva peddling.

Welcoming these so-called liberals and their trash-worthy suggestions that criticise Muslims for being unapologetic for their Muslim identity will eventually harm the greater struggles against Hindutva fascism. We need to see that global monopoly-finance capital, the sworn enemy of the working class and its Indian lackeys — crony-comprador capitalists — have been promoting Islamophobia to consolidate their rule, their hegemony on the political space where a divided people will be beneficial for them, as it was for the British colonial rulers. Can we afford to dance to their tune and betray the most oppressed and persecuted community in India? We certainly can’t and hence, fighting Islamophobia, within the ambit of the anti-Hindutva fascist movements against Modi’s BJP government, is very crucial at the current juncture. There can’t be any compromise on this, there can’t be any retreat from this front.