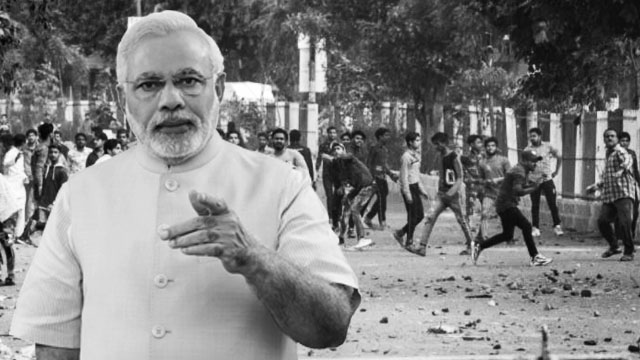 The communal violence in northeastern Delhi’s Jaffrabad started with Mishra’s armed thugs, apparently from the BJP’s parental organisation Rashtriya Swayamsevak Sangh (RSS), descending upon the protest site pelting stones, glass bottles and tube lights at the women and children, which created panic among the protesters. The Delhi Police became an active enabler of the violence and helped the RSS men in hitting the protesters. Amit Sharma, DCP (Shahdara), stood beside Mishra when he threatened to “clean the area” on his own if the protesters don’t retreat in three days.

From Monday morning, the violence escalated not only in Jaffrabad, Maujpur and Babarpur, but it also spread to Gokulpuri, Chandbagh, Bhajanpura, Kardampuri and Kabir Nagar areas. In front of the Delhi Police, armed troops of the RSS attacked Muslims indiscriminately chanting the Hindutva warcry of “Jai Shri Ram”. The Delhi Police fired teargas shells and charged baton on the anti-CAA-NPR-NRC protesters when the latter tried to resist the Hindutva fascist terrorists. The entire area turned into a battlefield, while the reinforcements of Hindutva fascists continued till 5.30pm. The RSS thugs burned down auto-rickshaws, trucks, and a petrol pump in Bhajanpura. They also burned the Kardampuri Tyre Market, targeting shops of Muslims. The RSS men also threw petrol bombs at a Mazhar, a Muslim holy place, in Bhajanpura.

This communal violence in northeastern Delhi’s Jaffrabad and adjacent areas coincide with the two-day-long India tour of US President Donald Trump. Be it Mishra’s three-day deadline to evict protesters or be it the Supreme Court’s postponing its verdict on the famous Shaheen Bagh protests, everything is synchronised to ensure that the state can unleash macabre atrocities on those protesting against the CAA-NPR-NRC in Delhi once Trump leaves India and foreign press stops covering its events. Though unprecedented security arrangements are made for Trump’s visit to New Delhi, the optics of a part of the capital town, nearly 22 km from the Rashtrapati Bhawan, burning due to a pogrom started by the RSS shows how vulnerable the people’s lives have become under Modi’s sclerotic rule. Trump will remain indifferent to this ordeal suffered by India’s largest minority community as White House will gain immense benefit in plundering Indian resources and cheap labour if the poor masses will remain divided and polarised.

The communal violence in northeastern Delhi’s Jaffrabad and other areas didn’t start spontaneously. It started according to a well-planned scheme of the BJP to avenge its ignominious loss in the recent Delhi Assembly election. Mishra, who switched from Aam Aadmi Party to the BJP a few years ago, lost the election despite running a venomous campaign targeting the anti-CAA-NPR-NRC protesters. The BJP wants to regain control of Delhi’s streets, which is taken over by the largest organic protests in the history of India. As the model set by Shaheen Bagh is inspiring and mobilising Muslim women to carry forward their valiant struggle against CAA-NPR-NRC, the BJP and the RSS are frantically trying to defeat them using brutal force to establish political hegemony and demand obeisance from the dissenting people. Can the Hindutva fascists and the Modi regime achieve success in doing so?

Modi and the RSS-BJP gained immensely from Hindutva fascist polarisation through communal pogroms, like 2002 Gujarat pogrom and the 2013 Muzaffarnagar pogrom. But its attempt to change the narrative of the massive movements by vilifying the protesters, at a time when the Sikhs, ostracised dalits, the oppressed tribals and other marginal forces have joined hands with the valorous Muslims protesting CAA-NPR-NRC. The communal violence in northeastern Delhi’s Jaffrabad may help the Modi regime to demonise the protesters and their struggle, it may give the Delhi Police an opportunity to unleash macabre atrocities against the Muslim community, yet, no amount of violence, intimidation and brutality will be able to provide any relief to it in the long-run. The protests won’t die down anytime soon. The people shall win in their justified struggle against the CAA-NPR-NRC ordeal.