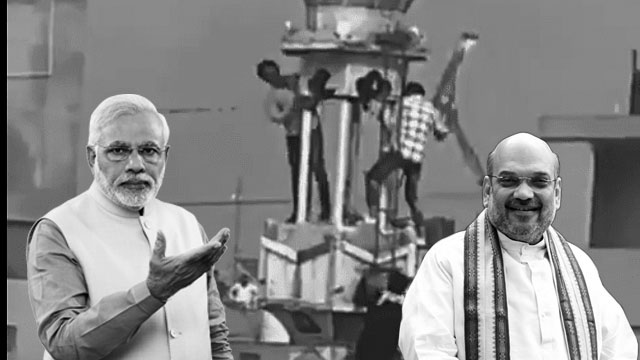 The massive violence that burned northeastern Delhi’s Ashok Nagar, Baburpur, Bhajanpura, Brij Vihar, Chandbagh, Gokulpuri, Jaffrabad, Karawalnagar, Khajuri Khas, Loni, Maujpur, Shiv Vihar, etc, is now projected in the mainstream press, which tried to suppress the news to the maximum extent during US President Donald Trump’s India visit due to its ignominious optics, as a ‘clash’ between those protesting against Prime Minister Narendra Modi’s contentious Citizenship (Amendment) Act, 2019 (CAA) and those supporting it. However, what Delhi experienced from 23 February to 25 February 2020 isn’t a ‘clash’ between anti-CAA protesters and pro-CAA protesters, it’s a state-sponsored anti-Muslim pogrom. It’s not a political mistake to call the violence that took place between 23 February and 26 February in Delhi, a state-sponsored anti-Muslim pogrom. Delhi’s anti-Muslim pogrom couldn’t have taken place if it wasn’t orchestrated by the ruling Bharatiya Janata Party (BJP) and its parental body Rashtriya Swayamsevak Sangh (RSS) with the support of Delhi Police, this makes it different than a general communal riot.

The myth of the protesters’ ‘clash’

The term ‘pro-CAA protesters’ used by the mainstream press is actually an oxymoron. There can’t be a pro-something protester. There aren’t protesters who are pro-Companies Act, pro-Contract Act, etc, because if there are people in favour of a particular law then they won’t be protesting on the streets. The protesters can only oppose a law or a rule, and that can justify their protests.

If there is a protest against people who are protesting against a law, in this case, the mobilisation of a large number of rumbustious men affiliated with the BJP-RSS against the anti-CAA protesters in Delhi’s Maujpur-Chandbagh road, then it’s actually inciting a mob of radicalised thugs to unleash macabre atrocities on those who oppose their views, in this case, the Muslims.

In no places, there were ‘clashes’ between anti-CAA and pro-CAA protesters. The entire violence, which turned into Delhi’s anti-Muslim pogrom, began on Sunday, 23 February, when BJP’s Kapil Mishra, who lost in the Delhi Assembly election and drew flak for his vitriolic speech against Muslims, mobilised a mob to attack the anti-CAA protesters demonstrating at the Maujpur-Chand Bagh road. He threatened to evict the protesters forcefully if the Delhi Police doesn’t oblige him. Mishra threatened violence standing right next to Amit Sharma, the Delhi Police’s Shahdara DCP.

The meek response from Sharma, who ironically got grievously injured at the beginning of Delhi’s anti-Muslim pogrom, encouraged the supporters of Mishra, affiliated with the BJP and the RSS, to act with impunity against the Muslim protesters. Facing severe violence, arson and attacks from bloodthirsty Hindutva fascist thugs who operated in cahoots with the Delhi Police, the Muslims were left with no other option but to hide in their houses, while a few dared to stay out and resist the BJP and RSS goons. The absence of the Delhi Police from the scene, its reluctance to act against the BJP and RSS thugs, and its shameless support to the Hindutva mob frightened the Muslims to the extreme.

The resistance to an all-out attack by an organised mob, funded by the ruling party and shielded by the Delhi Police isn’t communal violence, but a frantic bid by the hapless Muslims — mostly the poor working masses — to safeguard their lives and their families amidst Delhi’s anti-Muslim pogrom, sponsored by the Indian state. Criticising the Muslims for Delhi’s anti-Muslim pogrom. The so-called liberal attempt of ‘balancing’ the narrative by using the ‘clash’ myth must be exposed and smashed.

There are two narratives vis-a-vis Delhi’s anti-Muslim pogrom; one says that it’s politically-engineered pogrom that’s unleashed to derive long-term political mileage through communal polarisation, the other says that it’s ‘spontaneous’ violence. The ‘clash’ of these two narratives is actually the reflection of the two antagonistic camps’ contradiction.

As per a press release by the PIB, Home Minister Amit Shah noted: “professional assessment is that the violence in the capital has been spontaneous”. It’s not surprising that Shah, alike Modi and other RSS-trained fascist politicians, is a “professional” when it comes to riots. If there is one such industry that has continuously grown at a spectacular rate in India since the last 95 years, then it’s the RSS’s venomous riot-pogrom industry.

No one would doubt Shah’s credentials as a “professional” in instigating and managing communal pogroms. During the Delhi Assembly election campaigning, alike Mishra, Shah too resorted to venom-spitting to gain traction and titillate Hindutva-incensed people. When he is using his ‘professional’ assessment to judge the nature of the violence, then no person with an iota of senses will accept that version.

Spontaneously more than 5,000 people couldn’t have assembled to kill, ransack and burn down one part of Delhi in cahoots with the Delhi Police. If the violence was spontaneous, then the Delhi Police couldn’t have allowed it to spread from Maujpur-Chandpur to all locations of the district. Why did that happen? It happened because these people, these mobsters, were mobilised by the BJP and the RSS under the state’s patronage to carry out a pogrom that will be remembered by the people of Delhi for years to come.

Without an organisation, without a large chain of events and multiple coordinators through a central control room, managing groups of people to rampage and execute Delhi’s anti-Muslim pogrom with the state’s support couldn’t have been possible. If the Congress party or the city’s ruling Aam Aadmi Party (AAP) were complicit in the heinous plan, then the BJP and Shah wouldn’t have wasted a moment to crack the whip on the violence and crush it mercilessly. Shah looked nonchalant and the BJP amplified a vitriolic communal campaign milling bush telegraphs regarding the pogrom because it’s an action fuelled by the Modi regime, albeit covertly, to polarise Delhi’s backward class Hindu and ostracised dalit voters.

Handpicked age-group and the sense of impunity

Those who have experienced the communal rampage and bloodshed by the Hindutva fascists during Delhi’s anti-Muslim pogrom raised the peculiar aspect of this violence by citing the age of the perpetrators. The majority of the Hindutva fascist thugs, who were found killing people, attacking houses, vandalising properties and looting valuables, were in the age group of 16 to 21 years. Not many of the mobsters were above 30, according to eyewitnesses.

In 2019, the RSS’s leader Manmohan Vaidya bragged that 60% of RSS workers are school and college students. This comes at a time when the RSS’s membership doubled from 2010 to 2019. The participation of the teenagers, especially those below 18 years of age, is beneficial for the RSS as they won’t be punished for long even if they are arrested because they can be shown as under-aged and sent to juvenile homes. After remaining behind the bars for some time, these youth, devoid of any future scope of employment, will return to the RSS’s fold and, therefore, will be happy to serve its vicious agenda showing unquestionable loyalty.

The Modi regime has converted the Delhi Police into an appendage of the Hindutva fascist camp exploiting the brahminical hegemonic and Islamophobic views of its men and women due to the unique caste-class composition of the force. Out of a total strength of 84,000 heads, the Delhi Police has Muslim officers in the tens and Muslim constables in a few hundreds only. This makes the Delhi Police provide an immunity shield to the Hindutva-fascist forces rampaging and destroying the city brandishing rods, swords and pistols.

Such overlapping of the state and the Hindutva fascist thugs, such macabre atrocities against the Muslims, especially the poor, hapless and toiling people, under the nose of Delhi Police, is a part of the RSS’s project of tempering the radicalised young terrorists, who undergo vigorous training at its shakhas, to carry out pogroms while enjoying the state’s immunity cover so that they can inflict maximum injuries and terrorise the Muslim community.

As the RSS is going to open its first official military training school, the lessons of Delhi’s anti-Muslim pogrom will be a refresher course, after the 2002 Gujarat pogrom and 2013 Muzaffarnagar pogrom. The experience of using brute force to terrorise and forcefully evict Muslims from their homes by destroying their source of livelihood will help the RSS to launch bigger attacks on chosen localities in the future.

Resistance is the lesson of Delhi’s anti-Muslim pogrom

Though the level of education is extremely low in Muslims due to the sheer rule of the brahminical exclusionary system and extreme wealth difference, they have so far exhibited utmost political maturity by knitting close alliance with their Hindu neighbours to puncture the attempt by the BJP-RSS to change the narrative of Delhi’s anti-Muslim pogrom and by not depending on the Delhi Police, which not only left them at the mercy of armed Hindutva fascist thugs but also joined the latter’s attack against the Muslims.

To safeguard themselves and their families, many Muslim youths, out of rage, would attempt to thwart the attacks. Judging their resistance, their attempt to shield their families, when the police have shown complicity with the rioters, as an act of riot or calling it unlawful are sheer political perversion by the liberal and left-liberal sects, whose only action during such state-sponsored pogrom is to do balancing acrobatic show on social media and sermonise the Indian Muslims to not take law in their hands, even when facing imminent violence.

Delhi’s anti-Muslim pogrom, sponsored by the Hindutva fascist Modi regime and its apparatus, highlighted the importance of building a resistance struggle of the people by mobilising them. The attacks are launched on the poor and the lower-middle class to ensure they are financially-crippled, which would later force them to sell their labour at the cheapest rate to make a living, providing the big corporate donors of the BJP-RSS with a pool of cheap labour to maximise their profit.

As the Muslims remain at the receiving end of violence, what the minority community, which is gradually, and officially, dehumanised since the last six years, has as the only option to live with dignity in Modi-fied India, is resistance. Delhi’s anti-Muslim pogrom highlighted the importance of a resistance programme. The resistance to the communal pogrom and the aggression of Hindutva thugs, though primarily by Muslims but also by their Hindu neighbours, is an essential task that can’t be overlooked. Preparing for resistance is imperative as the attacks by the Hindutva fascists won’t stop with this incident, but will soon spread to many more places. The better the preparations, the better would be the chances of saving lives and livelihoods of Muslims and Hindus from the feral thugs mobilised by the BJP and the RSS to spread enmity between communities.