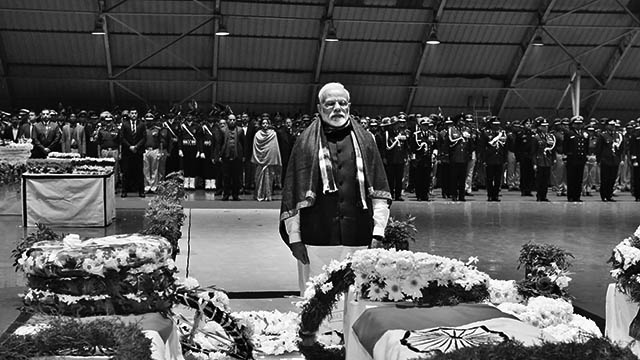 Apart from Valentine’s Day celebration, India also saw the commemoration of the first anniversary of the Pulwama attack on 14 February 2020. Forty Central Reserve Police Force (CRPF) personnel were killed on 14 February 2019 in South Kashmir’s Pulwama after a car laden with RDX hit their armed juggernaut on a highly-secured national highway under mysterious circumstances. Unlike 2019, Prime Minister Narendra Modi’s government didn’t commemorate the incident with much fanfare. The Ministry of Home Affairs (MHA) organised a nondescript function with a junior minister presiding over. Corporate houses filled the void with advertisement campaigns to exploit the chauvinistic emotive tug of India’s 200 million Modi supporters.

Modi was in a photoshoot in Uttarakhand’s Jim Corbett National Park during the incident and allegedly continued the shoot even after he was briefed. Later, he and his Bharatiya Janata Party (BJP), led by its ideological mentor Rashtriya Swayamsevak Sangh (RSS) monetized the incident to score political brownies. Apparently the dead bodies of these 40 CRPF men killed in the Pulwama attack helped the BJP to sweep the 2019 Lok Sabha election and win a record victory.

The 40 CRPF men killed in the Pulwama attack were mostly from Dalit, tribal and other backward class (OBC) backgrounds who were sent to Kashmir to suppress the mass struggle for freedom. Due to their caste and class background, they easily became expendable for the government. Since decades, the Indian state has deployed soldiers from Dalit, tribal and OBC background in its brutal war against ordinary Kashmiri people. The Caravan did an extra-ordinary story on the castes of the soldiers killed in the Pulwama attack. It showed how the Dalits, tribals and OBCs from poor background are used as expendable pawns by the Indian ruling classes. The Hindutva fascist press and the CRPF were irked by the report and lambasted The Caravan for showing the courage to call a spade – a spade.

The Pulwama attack created a nationwide jingoistic outburst; driven by sheer xenophobic rage, the Hindutva fanatics attacked Kashmiris all over the country. But they weren’t the only one to face the wrath.

Those who questioned the intelligence failure, the lacklustre attitude of the security checkpoints run by the Indian Army in the most-militarised zone on earth, the reluctance of the MHA to heed advice of the CRPF top brass asking for airlifting troops, and the obnoxious agenda behind the Pulwama attack at a time when Modi’s popularity was at the nadir due to the Rafale Jet scam, the high unemployment rate and non-fulfilment of promises, not only suffered the verbal onslaught but were even physically heckled and some were even thrown out of their jobs.

The much-celebrated “Balakote surgical strike” —  a purported attack on an alleged Jaish-e-Mohammad training camp inside Pakistan by the Indian Air Force (IAF), taking cover of the clouds to evade the radar detection and when the credibility of such a claim was questioned by the international press and Indian anti-fascists, the “anti-national” tag was used in galore by the ruling clique — followed the Pulwama attack and was hyped as Modi’s valorous response to Pakistan’s terror-sponsoring. The corporate-controlled Indian press joined the jingoistic celebratory bandwagon and shredded those mercilessly who asked for evidence. Modi became a hero, even when his actions placed India at risk of a war with a nuclear-power neighbour. Balakote, backed by Pulwama, won him a crucial election, just like the 2002 Gujarat pogrom, backed by Godhara incident, once helped him to sweep the Gujarat Assembly election.

Pakistan conducted an air raid in India, which engaged the IAF for the first time in decades in a combat operation. The dogfight between IAF and Pakistan Air Force caused immense ignominy to India as one of its pilots, Abhinandan Varthaman, was nabbed by the Pakistanis when his MiG 21 was shot down by Pakistani Air Defence. All these actions kept the narrative of ultra-nationalism at the peak of public discourse, while unemployment, shattered economy, farmers’ suicides, Rafale Jet scam, etc, were thrown to the oblivion by the BJP and the RSS. Modi swept the 2019 Lok Sabha election, leaving his opponents bedazzled. Collectively, the opposition failed to build a counter-narrative to expose Modi’s lies.

This Pulwama chronology is fathomed by many; yet, many refuse to accept that these things were not a series of incidents that were juxtaposed automatically. Even after Modi’s victory, the jingoistic euphoria is still alive, what’s not asked is who benefitted from the Pulwama attack? Mita Santra, the wife of slain soldier Bablu Santra, was abused by the Hindutva fascists when she questioned the dirty politics of Modi and his war-mongering.

No investigation report came out to tell the world whose lapses enabled the Pulwama attack. No investigation brought out the findings over how could a car travel unchecked with RDX in its trunk on a highly-secured national highway of Jammu & Kashmir? No heads have rolled either in the MHA, NIA or the Ministry of Defence over the Pulwama attack and the loss of 40 lives. The families of those 40 soldiers, who were promised a lot of things by Modi and the BJP, are complaining about unfulfilled promises.

It was only after the elections that the family members of the IAF crew, killed in Budgam when their Mi17 helicopter was shot down on 27 February 2019, came to know that it was a friendly fire that killed the men that fateful morning. Will someday the family members of the soldiers killed in the Pulwama attack come to know something similar? We don’t know. None knows if the truth will ever see the light of the day or whether the family members of the soldiers will realise that their wards were taken — and many of them are taken even now — to the fields and streets of Kashmir to butcher the common people on behalf of the government. That they were mere pawns in an obnoxious gameplan? But if they realise, then the sandcastle of Modi’s Hindutva-fascist nationalism will collapse in a flash.