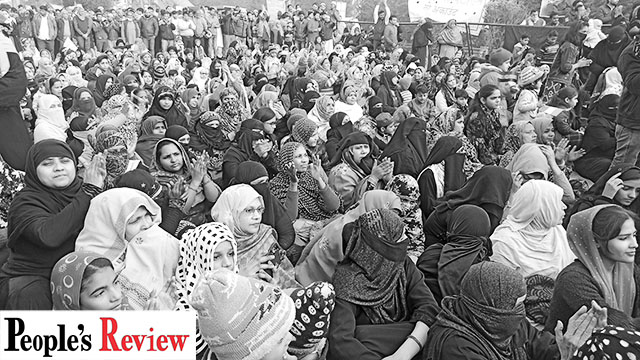 The Supreme Court has been expressing its displeasure over the fact that people of Shaheen Bagh are occupying 500 metres stretch of a road connecting New Delhi’s southern part with neighbourhood Uttar Pradesh suburb Noida. Shaheen Bagh is the epicentre of all-India protests against Prime Minister Narendra Modi’s contentious Citizenship (Amendment) Act, 2019 (CAA), the forthcoming National Population Register (NPR) exercise and a proposed National Register of Citizens (NRC). The bench of Justices Kishan Kaul and KM Joseph has appointed a committee under advocate Sanjay Hegde to talk to the Shaheen Bagh protesters and see if they can move their protest to another site. The Supreme Court is already hearing petitions on the CAA’s constitutional validity and the discussion with the Shaheen Bagh protesters will not include any discussion on their demands but on the site of the protests. The Supreme Court’s direction on Shaheen Bagh protests also keeps the option of state violence open, as it opined that the administration is free to take any step if the discussion between the Hegde-led committee and the protesters fail to break the logjam over shifting the Shaheen Bagh protest site. The apex court will hear the matter on 24 February 2020.

Earlier, on 10 February 2020, the Supreme Court had expressed anguish over the blockade of the road and said that though protests are fundamental rights, they can happen only in designated areas of a city. In New Delhi, the court has designated a small stretch of Jantar Mantar area as the protest site for everyone, which eventually kills the purpose of protesting. While ordering the formation of a committee to negotiate a deal shifting the Shaheen Bagh protest site to Jantar Mantar or a similar less significant site, the Supreme Court said the blockade of a “public road is troubling us”. Justice Kaul, who was heading the bench, said: “If everybody starts blocking roads even when they have genuine grievances, where will that take us?”

This is a crucial question for a functional democracy. What’s supreme in a democratic republic? The people or the government that pretends to be the people’s representative? Can a people’s protest inconvenience others? There can’t be a homogenous block called people but to support or oppose a movement what must be seen is whether the grievances are genuine? Are these people under threat? Are these people vulnerable, marginalised and exploited? Before asking the people what will be the outcome of them blocking roads on each of their genuine grievances, isn’t it better to ask the government to not adopt policies that hurt people and force them to hit the streets? If every genuine grievance cause the oppressed and exploited people to block roads and trains, halt the economy of the country, then it will, of course, force the government of the day to not take any such step against public interest like in the present case it must repeal the CAA 2019 and 2003, it must do away with the NPR and NRC projects to ensure there is no roadblock in the country.

If people’s protests can genuinely paralyse the movement of the ruling classes and affect their profiteering then they will be compelled to abide by the people’s demand and avoid adopting anti-people policies. However, such a textbook equilibrium doesn’t exist in a democracy where a handful of the rich profiteer at the cost of the agony of millions, while the government elected by the majority of the millions serve the interests of such a handful of parasites. The question of shifting the Shaheen Bagh protest site to a convenient place is arising because of the inconvenience the representatives of the ruling classes have faced due to the closure of the stretch. Most of the big corporate honchos and their servile lackeys, the top executives of corporate India, travelling to Noida or Delhi have to travel through the Noida DND flyover to reach Noida and have to spend more time on the roads. But what about the people whose citizenship is at stake? What about 200 million Muslims, over 500 million dalits, tribals and other marginalised communities who will be at the receiving end of the draconian schemes of the Modi regime?

If the Supreme Court or any other authoritative body would’ve paid equal importance to the cause of ensuring that the people do not have grievances, that the laws of the land aren’t made discriminatory, that the judgements of the court don’t cause grievous injury to the essence of secularism, then there wouldn’t have been a Shaheen Bagh protest at the first place. Shifting Shaheen Bagh protest site through intimidation isn’t going to address the root cause, which is injustice. Then, who cares for justice in Modi-fied India where Kashmir reels under an unprecedented and macabre military siege since last 194 days? Who cares that there has been an internet and communication blockade for months? All that matters to the Indian state is the road blocking quicker access between Noida and Delhi. The optics of Muslim women bringing the Hindutva fascist regime to knees is something that the ruling classes can’t tolerate and everything that follows is their frantic reaction and desperation to bring it down.