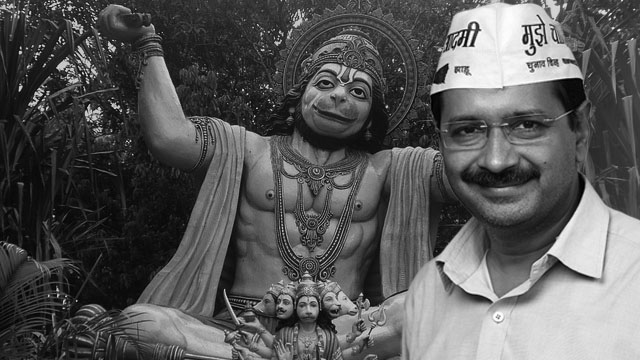 The centre-right Aam Aadmi Party (AAP) swept the Delhi Assembly election 2020, surprising many pundits, as it centred its campaigning on its track record in the sectors like public healthcare, education, power and water. Party founder and Delhi Chief Minister Arvind Kejriwal’s campaign avoided confronting the party’s principal opposition Bharatiya Janata Party’s (BJP) vitriolic propaganda, except a few occasions. However, soon after winning the election, Kejriwal and the AAP leaders entered an orgy of publicly revering Hindu deity Hanuman. The AAP’s Hanuman worship spree surprised many, if not all, as until yesterday it swore by the constitution and called itself a secular organisation.

“This is the day of Lord Hanuman who has blessed the people of Delhi. We pray that Hanuman Ji keeps showing the right path to us so that we continue to serve people for the next five years,” Kejriwal said while addressing the party workers after winning the election. There has been a tirade between the AAP chief and the BJP over the former’s reverence towards Hanuman since the election campaign, which sparked controversy as both camps tried to cash-on north Indian Hindu sentiments by using religion as a weapon in politics.

Saurabh Bhardwaj, a member of the Legislative Assembly (MLA) from posh southern Delhi neighbourhood Greater Kailash, informed the press that Sundar Kand — a chapter of the Hindu mythology Ramayana — will be recited at various locations of his constituency on a regular basis to hail Lord Hanuman. The MLA didn’t limit himself to the AAP’s Hanuman worship spree, but also requested the Ram Janmabhoomi Trust to build a tall idol of Lord Hanuman in Ayodhya’s proposed giant Ram Mandir. He gave spiritual reasons for that also. The proposed Ram temple will be built on a disputed piece of land, where Babri Masjid —  a 15th-century mosque — once stood and was demolished in 1992 by thugs associated with the BJP’s parental body Rashtriya Swayamsevak Sangh (RSS). In a controversial verdict, the Supreme Court recently gave the land to the demolishers after condemning the demolition; the trust is built by Prime Minister Narendra Modi’s regime and has people associated with the RSS in it.

By demanding a Hanuman idol in the proposed Ram temple in Ayodhya, the AAP MLA endorsed the demolition of the Babri Masjid and exhibited how ideologically comfortable AAP is in donning the Hindutva attire. The AAP’s Hanuman worship spree isn’t an isolated incident. Since inception, the AAP remained aloof from almost all secular democratic movements and identified itself with the far-right of Indian polity on various occasions. From voting in favour of the abrogation of Article 370 and Article 35A and the bifurcation of the former princely state of Jammu & Kashmir into two union territories, while ironically demanding full statehood for Delhi, to mooting allowing the Delhi Police the permission to file sedition charges against Jawaharlal Nehru University (JNU) students, the AAP eradicated the demarcation between it and the BJP. Rather than supporting the women of Shaheen Bagh protesting against the Modi regime’s contentious Citizenship (Amendment) Act, 2019, or showing solidarity with the JNU students who were attacked by the RSS’s thugs, Kejriwal and the AAP showed a nonchalant attitude over the crucial political questions. Is this to merely appease the upper-caste Hindu voters of Delhi?

The AAP’s Hanuman worship spree isn’t merely an attempt to woo the upper-caste Hindu voters of the party who switches to the BJP in the Lok Sabha elections, citing Hindu nationalism as their priority. Rather, this is a strategic shift of the party to embrace a Hindu identity to foray deep in other territories of India, outside its bastion of Delhi. As the BJP has been dominating the Hindu space of politics for the last 38 years and as with the intrusion of the RSS in all institutions of India has rendered it impossible for any political party of the mainstream to exist without subscribing to the brahminical hegemonic ideology and its skewed version of nationalism, the AAP is trying to enter this terrain that none of the other political parties, including the hardcore political allies of the BJP, have ventured to.

This strategic shift through which Kejriwal is actually trying to portray the AAP as an alternative to the BJP is a dangerous trendsetter. The Muslims, dalits and other marginalised communities not only lack political representation in India but also they don’t have a voice. The consolidation of the Hindu vote bank politics, which is essentially upper-caste elite and middle class-dominated, will have a severe impact on the opposition camp, as more political parties, especially those with questionable credentials like Trinamool Congress of West Bengal, will get into a tryst with unapologetic Hindu appeasement.

Unbridled Hindu appeasement for vote bank politics will immensely damage the scope for the marginalised people to be heard. Though the AAP never represented the marginalised, still its switch to soft Hindutva fascism will cause far more troubles for the minority Muslims and marginalised communities, as most parties will follow the easy suit of appeasing the so-called Hindu vote bank, which will actually fulfil the RSS’s goal of making Indian mainstream politics an appendage of brahminical hegemony. The AAP’s Hanuman worship spree doesn’t call for “memes” and caricature, it’s an obnoxious agenda that will have ripple effects in Indian politics. The consolidation of oppressed people’s power can only help.