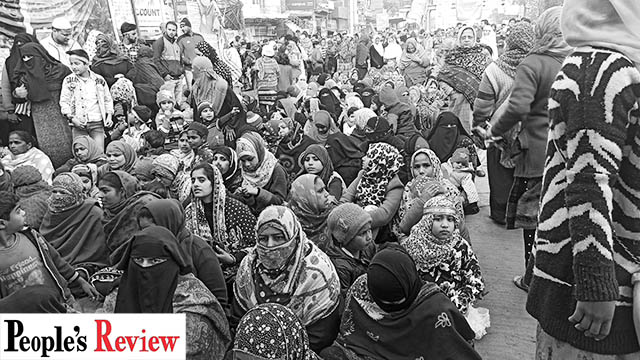 Since its drubbing in the Delhi Assembly election 2020 caused ignominy for the Bharatiya Janata Party (BJP) of Prime Minister Narendra Modi, some tactical adjustments are visible in its approach. While attending a summit hosted by Times Now, a notorious toady television channel of the BJP, Home Minister Amit Shah said two important things that point towards this tactical retreat. Firstly, Shah admitted that the vitriol against Shaheen Bagh protesters, participating in a two-month-long sit-in protest opposing the contentious Citizenship (Amendment) Act, 2019 (CAA), and demanding the scrapping of the National Population Register (NPR) exercise and the notorious National Register of Citizens (NRC) programme, didn’t help the party at all. Secondly, without naming the Shaheen Bagh protesters, he said that anyone can come and discuss apprehensions about the CAA with him at his office after booking an appointment, which, he said, will be given within three days.

At the same Times Now event, Shah reiterated that the CAA won’t take away the citizenship of the Indian Muslims, which is a half-truth, as he didn’t tell them the facts about the NRC, which his ministry is now denying to have mooted. Shah admitted that though the NRC was in the BJP’s programme, the Modi regime didn’t moot it for an all-India application in the present term, something that Modi first declared on 22 December 2019, at a BJP rally held in New Delhi’s Ramlila Maidan. Though there are discrepancies over the NRC programme, the implementation of the NPR will actually do half the job of the NRC.

The Modi regime is looking for opportunities to demolish this new-age, a fierce feminist movement launched organically by the Pasmanda Muslim women with no prior experience in politics. The Shaheen Bagh protesters have inspired Muslim women of other parts of the country, including BJP-ruled Bihar, Karnataka and Uttar Pradesh, to start similar movements in their localities. As an epicentre of anti-CAA and anti-NRC movements, Shaheen Bagh is a threat to Modi’s hegemony and the BJP’s existence.

Soon after Shah’s proposal, one camp of protesters agreed to meet Shah. Local politicians like Ashu Khan and Asif Toofani took the lead to announce that the Dadis of Shaheen Bagh (grandmothers of Shaheen Bagh), ie, the three well-known and much-revered old women who have been at the forefront of the movement since its beginning, will go to meet Shah at his office. However, the participants of the movement quashed this plan, as these women didn’t like the idea of local politicians interfering and deciding for them their course of action. After deliberation, the Shaheen Bagh protesters agreed to organise a march to Shah’s residence on Sunday, 16 February 2020, to have an open discussion with the home minister.

One must remember that it was Shah who spewed the maximum venom against the Shaheen Bagh protesters during the BJP’s campaigning for the Delhi Assembly election. Both Shah and Uttar Pradesh Chief Minister Yogi Adityanath lambasted the Congress party and the Aam Aadmi Party for the Shaheen Bagh protest and accused that these parties are feeding biryani to the protesters. This derogatory and vile attack was topped with Shah’s clarion call to “press the EVM button so hard that current is felt in Shaheen Bagh”. Senior BJP leaders like Anurag Thakur, Pravesh Singh Verma and Kapil Mishra also provoked violence, causing fringe Hindutva terrorists shooting protesters in Jamia Millia Islamia and also in Shaheen Bagh. It’s unlikely that Shah went through a change of heart overnight. Shah’s invitation to a discussion is actually nothing but a bait dangled before the Shaheen Bagh protesters, which, if gulped, will cause fatal damage to their struggle.

It’s imperative to see that the Shaheen Bagh protesters have been demanding a dialogue with the Modi regime since the first day of their 24-hours-vigil. Yet, no representative of the Modi regime took any initiative to listen to their grievances. Now by calling them to his office, Shah is actually trying to play an old colonial-era game with the protesters. The government offices emit vibes of power and authority. Even though technically the people are the masters of this Republic but when they enter a government office, even for the most trivial matters, they are reduced to powerless and banal objects by the authoritative aura of these colonial-era establishments. Similarly, far from their abode, the epicentre of their movement, if the Shaheen Bagh protesters, or the Dadis of Shaheen Bagh, visit Shah’s office to discuss their apprehensions and showcase their agony, the dominating psychological and institutional supremacy of Shah will cripple their ability to raise demands on equal terms.

Apart from Shah, the Supreme Court has also opposed the Shaheen Bagh protest and expressed its concern over the blockade of a road. Ironically, as Kashmir reeled under the longest military siege and communication blockade for more than six months, the apex court was not seen in any hurry to provide respite to the people. The Supreme Court will deliver a verdict on the Shaheen Bagh protests on Monday, 17 February 2020. It has already reiterated its old stance that protests in each city can’t happen anywhere outside an area designated by the authorities, which is actually an unapologetic attempt to throttle the democratic right of the people to protest against an ineffective government by forcing them to follow the diktats of the same authority they are fighting against. The shifting of Shaheen Bagh protest site to New Delhi’s Jantar Mantar area will only kill the potential of the movement and conceal it forever from public view.

By not going to his office, the Shaheen Bagh protesters have shown the presence of mind to Shah. However, irrespective of the booking of appointment with Shah in the next week, the Supreme Court’s verdict will have severe implication on their protest movement. If the Supreme Court, which it seems will, order the Shaheen Bagh protesters to evacuate the road and shift their movement to Jantar Mantar, then the Modi regime will not delay in unleashing police violence to evict the protesters. However, as the US President Donald Trump is all set to start his maiden India visit next week, it’s unlikely that the Modi regime will take a step that can cause it embarrassment on a global scale after the Kashmir fiasco and the attack on Jamia Millia Islamia students. The presence of the international press at Shaheen Bagh is complicating matters for the BJP.

In this situation, it’s unlikely that either Modi or Shah will visit Shaheen Bagh because it will cause severe damage to the perceptions about themselves. Both Modi and Shah project themselves as strong Hindu leaders who won’t compromise on core ideology of the Rashtriya Swayamsevak Sangh (RSS) — the wellspring of Hindutva fascist ideology — and this image helps to titillate their core supporters. The RSS won’t allow the optics of Modi or Shah budging to the pressure of Muslim women, whom it has stamped as hostile. Thus, under no circumstances, Modi or Shah will visit Shaheen Bagh to discuss the issues with the protesters. Moreover, as the NRC exercise is mandated by the Citizenship (Amendment) Act, 2003, and will help the big corporate donors of the BJP and the RSS with a huge cheap labour pool, consisting of stateless poor labouring masses with no bargaining rights, there is no scope of its abrogation without an intense people’s struggle.

The only way right now open for the Shaheen Bagh protesters is to tread the treacherous course very carefully to evade falling into the trap laid by the RSS and the BJP on their way. If they give up their demand for an open discussion with Modi and Shah, and their demand for nothing less than a written assurance from the regime that the contentious CAA and the notorious NPR-NRC will be scrapped, then they will lose the gains they have made through their endurance in the last two months. The Supreme Court, the Modi regime and the entire Hindutva fascism-inclined state will oppose them vehemently, yet, if they are able to hold on to their resolution and carry forward the struggle with determination the evil forces will fail to defeat them. Shah’s trickery and manoeuvering may win him elections and seats, but not the real political battles fought by the people against Hindutva fascism.