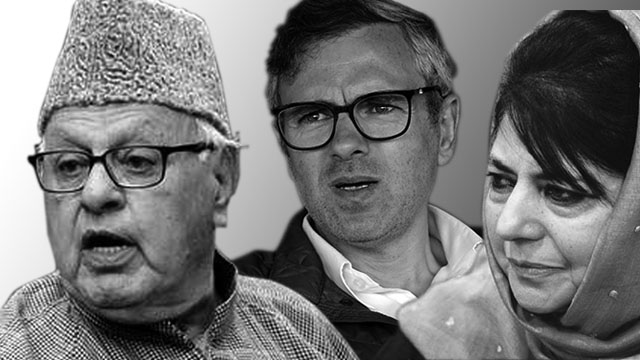 It has been six long months that Narendra Modi-led Bharatiya Janata Party (BJP) regime abrogated Article 370, Article 35A and bifurcated the former princely state of Jammu & Kashmir. After that Jammu & Kashmir reeled under the longest communication blockade in the world, including the longest internet blockade, as well as it also experienced the worst economic crisis and a brutal crackdown on the limited political and civil rights that the people enjoyed under New Delhi’s occupation. Not only did New Delhi arrest the separatist politicians, but it also detained the mainstream pro-India politicians, traders, brokers, etc, including three former chief ministers: People’s Democratic Party‘s (PDP) Mehbooba Mufti, National Conference’s (NC) Farooq Abdullah and Omar Abdullah. Last week, quoting a fake news site, Modi announced that the Ministry of Home Affairs is slapping the draconian Public Safety Act (PSA) against the trio. Why Modi slapped PSA on the Abdullahs and Mufti?

The PSA is a draconian law that allows the Jammu & Kashmir Police to detain someone on suspicion for up to a period of two years. Ironically enacted by senior Abdullah’s father Sheikh Abdullah in 1978 to curb timber smuggling, the PSA is widely used to detain political dissenters in the valley. The former chief ministers under detention since the abrogation of Article 370 and 35A have been slapped with the PSA as Modi accused them of fomenting trouble in the valley, citing a fake news website. It’s not that the prime minister accused the trio on the basis of the fake news article, rather he accused them first and then used the fake news site to back up his claim, a classic modus operandi of Rashtriya Swayamsevak Sangh (RSS) activists. But the question is why Modi slapped PSA on Abdullahs and Mufti?

Abrogation of Article 370 and bifurcation of Jammu & Kashmir aren’t merely steps taken by the ruling BJP to transform Jammu & Kashmir into a Hindu settlement-colonialist project, rather it’s a step taken to ensure greater access to natural resources and water for the big foreign monopoly-finance capital-owned corporations and their Indian crony-comprador capitalist lackeys.  As the formal annexation of Jammu & Kashmir strips it off the ornamental special status it enjoyed on papers and gave immense access to the big capital, the entire Indian crony-comprador capitalist bloc, represented by the notorious industry lobby groups, welcomed Modi’s move. Global corporate entities too didn’t hide their happiness and did everything possible to keep Modi and the BJP immune from legal implications on a global scale.

This is a long-term project. Rather than upping the ante against Pakistan or China on the Jammu & Kashmir question, the Modi regime will allow the issue to die a natural death over a period of time. It will get immense support from the US, the UK and Russia on the question of Jammu & Kashmir in the United Nations Security Council (UNSC). Though Jammu & Kashmir is a disputed territory according to the United Nations’ (UN) and though any attempt to alter its demography, its geographic boundaries, etc, are considered a violation of the UN laws, the Modi regime’s adventurism will be immunised by its friends in the UNSC. This also encourages India to commit gross human rights violations in the UN-recognised disputed territory, and a reason why Modi slapped PSA on Abdullahs and Mufti with utmost impunity.

Both PDP and NC have been historically New Delhi-controlled Kashmiri outfits. Apart from the New Delhi-deputed Congress party and a cunning Communist Party of India (Marxist) working in the valley as truly “Indian” parties, the PDP and NC had the leverage as home-grown parties and worked as executioners of New Delhi’s will. Modi knows that by simply dissolving these parties won’t help the Indian occupation in the long-term. Modi and the RSS always knew that the abrogation of Article 370 will not only turn the Kashmiri people against India forever, but it will also isolate New Delhi’s Kashmiri lackeys like PDP and NC forever from the Kashmiri people. To replace PDP and NC as chief water-carriers, New Delhi required sustainable alternatives, and all such experiments that the BJP tried, from Shah Faizal’s outfit to the promotion of the party itself, failed drastically to win people’s support before 5 August. This is a reason why his government placed the entire PDP and NC activists under detention since 5 August 2019.

Through their detention, the Abdullahs and Mufti were shown as victims of Indian repression due to their Kashmiri identity. Though they remained confined in utmost luxury unlike their footsoldiers, these former chief ministers were projected as victims of India’s repression. From the heckling of the Abdullah senior to the attempts made by Mufti’s daughter to tell the world her mother’s agony, everything was scripted well to feed a narrative that these pro-Indian politicians are tormented by New Delhi because they are Kashmiri.

But if asked why Modi slapped PSA on Abdullahs and Mufti? Then it’s not merely to make martyrs out of them, so that they can be honoured tomorrow, but also to ensure that in the future when they get out, they are received with reverence by the people. For this reason, the BJP has generously allowed a large number of PDP and NC activists to go scot-free after the initial few weeks of detention. This will help set a narrative that though the grassroots workers remained out, the leaders suffered persecution. Emotional exploitation of the Kashmiri psyche, as the Congress once did through its puppet Sheikh Abdullah. Moreover, the BJP wants that the Abdullahs and Mufti then launch a vigorous movement demanding full statehood of Jammu & Kashmir and restoration of pre-5 August status. This will eventually cause a severe setback to the Kashmiri people’s demand for total independence from Indian clutch.

It’s imperative to go beyond popular narrative to understand the complicated political discourse of a colonised Kashmir. Why Modi slapped PSA on Abdullahs and Mufti can’t be gauged from Modi’s rhetoric, RSS-BJP’s chest-thumping or the vitriol spread by people like Amit Shah. It must be understood from the facts related to Kashmir that are making it a lucrative “jewel” in the crown of India, as Modi puts it, and that will lead us to the scheme of colonising Kashmir for the sake of maximising the super profit of foreign corporations and their Indian crony-comprador capitalist allies. Along with it, Kashmir happens to be a buffer, with expendable Muslims, between India and its nuclear-power neighbours, and a launchpad for a war with China. It’s an attempt to commercialise Kashmir’s water, natural resources, etc, and change the dominant narrative of freedom to a movement that will demand a complete statehood, one step below the pre-5 August 2019 status. Will or have the Kashmiri people interpreted this already? Have they thought about exiling these Abdullahs and Muftis from public life and have they resolved to take forward their struggle for freedom, dignity and equality with vigour will be answered by the time and the incidents that unfold before our eyes in the days to come.