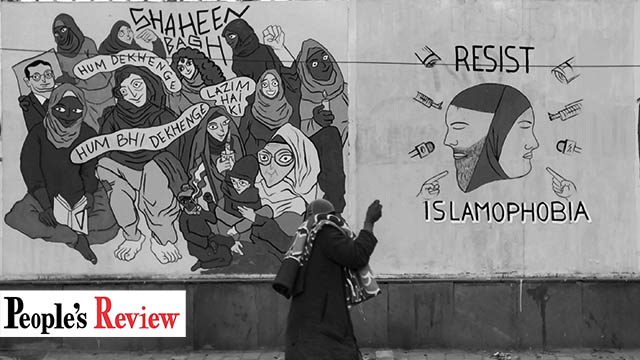 The Delhi Police is accused of acting as a semi-official outfit of the Hindutva fascist Rashtriya Swayamsevak Sangh (RSS) and of parroting the narrative of the ruling Bharatiya Janata Party (BJP) of Prime Minister Narendra Modi. Though the Delhi Police has been facing the allegations of being an Islamophobic force that peddles the Hindutva fascist propaganda to vitiate the atmosphere and systematically vilifies and persecutes Muslims, since a long time, it’s with the beginning of the protests against Modi’s new citizenship matrix that the policemen of the capital city began exhibiting their Islamophobic character blatantly and unapologetically to the world. They left the minimal veil of neutrality they wore before 2014, and are happy to wear both their religious bigotry and political loyalty on their sleeves. The Delhi Police’s nexus with Hindutva fascism is neither a surprising allegation nor one that even its own men would deny.

Starting from Friday, December 13th 2019, when it attacked the students of Jamia Millia Islamia University (JMI) for the first time when they tried taking out a rally against the Citizenship (Amendment) Act, 2019 (CAA), and the National Register of Citizens (NRC), the Delhi Police didn’t shy exhibiting its sheer Islamophobia. On Sunday, December 15th 2019, it shamelessly baton-charged the protesting JMI students on the streets as well as inside the library within the campus. This ghastly attack against JMI students was carried out by the Delhi Police hurling Islamophobic slurs; the rumbustious policemen formed a mob and didn’t even spare women. The Delhi Police vehemently denied, on one hand, its Islamophobic ranting, on television, while on the other, its Islamophobic and bigoted optics were shown on television, thrusting a rapier into its blatant lies.

If these attacks weren’t enough to exhibit Delhi Police’s nexus with Hindutva fascism, the next lease of violence against the Muslims protesting against CAA and NRC at Jama Masjid and Seelampur on December 20th 2019, followed by the arbitrary arrest of Bhim Army’s chief Chandrashekhar Azad Ravan along with others, did the job. The Delhi Police’s nexus with Hindutva became infamous and it was even taunted for this on different occasions by its critics.

The way the Delhi Police nonchalantly dealt with a Hindutva fascism-incensed thug who shot a JMI student while hailing the police, the way it attacked protesters at Jamia Nagar again and again, and its reluctance to build a strong case against the man who fired bullets at Shaheen Bagh’s protest site punctured the claim that it’s a policing body and not a wing of the RSS. The Delhi Police’s nexus with Hindutva fascism under the watch of Modi’s notorious home minister, Amit Shah, became a talking point in even the liberal circles, where such accusations were earlier vehemently denied.

These servile acts showed how the Delhi Police’s nexus with Hindutva fascism thrived under former commissioner Amulya Pattnaik and South-East District DCP Chinmay Biswal, both from Odisha, a state with a strong entrenchment of the RSS. No wonder, Pattnaik enjoyed an extension for long, while Biswal was forcefully transferred by the Election Commission during Delhi Assembly election 2020 due to his shameless collaboration with the BJP to flare up communal violence in Jamia Nagar to evict the Shaheen Bagh protesters.

After a BJP-sponsored feral mob attacked the Muslims in North-East district’s Jaffrabad and Maujpur, under the leadership of Kapil Mishra, the Delhi Police’s nexus with Hindutva fascism took the utmost unapologetic and fierce form. Right under the nose of the Modi regime, exactly during the maiden India tour of US President Donald Trump, when the entire city was fortified by the Delhi Police, the northeastern parts of the city experienced the worst anti-Muslim pogrom that the city has seen in decades. The state-sponsored pogrom killed more than 53 people between February 23rd and February 27 as per official records, while unofficially, more than 130 people are either dead or missing and more dead bodies are fished from the sewage pipe flowing to the Yamuna river from the mixed-community localities.

While no complaints were filed against Mishra and other BJP leaders like Yogi Adityanath, Parvesh Verma, Anurag Thakur, etc, who provoked people with Islamophobic tirade during and after the Delhi Assembly election 2020, especially Mishra who mobilised a mob of young men from 15 to 30 years of age to attack anti-CAA protesters who have been peacefully raising their demands since December 15th 2019, the Delhi Police didn’t take much time to arrest more than 2,400 youth from northeastern parts of Delhi, mostly Muslim men from poor families. It also ran a vitriol campaign against Delhi’s ruling Aam Aadmi Party’s (AAP) councillor Tahir Hussain, who, along with Muslim youth taking shelter at his house from the Hindutva-incensed mob, defended their lives by resisting the advance of the mob trying to burn down their locality.

Even the charge of murdering an Intelligence Bureau agent from an upper-caste Hindu family was also slapped on Hussain, and the press didn’t stop demonising him for resisting the aggression. AAP MLA Amanatullah Khan rightly said that Hussain paid the price of being a Muslim. Shah didn’t disclose to the parliament how many Muslims were killed in the pogrom and he patted the back of the Delhi Police, which not just remained nonchalant about the pain and panic of the Muslim community, but also joined the mob in attacking Muslim houses, vandalising and killing people, at several places during the peak days of violence. Still, with the press’s help, the Delhi Police managed to whitewash its crimes and vilified the Muslims instead.

Despite some retired police officers repenting over the metamorphosis of the Delhi Police into an RSS appendage, it’s neither a surprising development nor a recent phenomenon. Over the last four to five decades, the Delhi Police has evolved to become a notorious and an unapologetic Hindutva outfit like the Bajrang Dal or Sri Ram Sene. The organisation’s blatant anti-Muslim character, the monopoly of upper-caste Hindus in the officer level and minimal hiring of Muslims and Dalits have made it an ideal mercenary force of the Hindutva fascists. The Delhi Police’s anti-Muslim character isn’t a new thing to discover, it was always there but under the warp.

It’s merely a utopian Nehruvian wish to expect a colonial-era state apparatus, which was raised in 1861 to combat popular dissent against the British colonial rule after the Great Rebellion of 1857, to become a modern policing force showing high regards to constitutional morality, democratic and secular ethos. In a dystopian state, the Delhi Police is actually functioning perfectly and doing what it’s supposed to do — combat dissent and spread terror. One must not forget that the Indian administrative and judicial services had been designed by the British colonial rulers to serve their colonial ambitions, and even after the so-called independence, the same machinery has been used unchanged by the Indian rulers, with periodic cosmetic reforms and change in nomenclature. Thus, be it the exposure of the Delhi Police’s nexus with Hindutva fascism, or be it the Indian Army’s excesses in the Kashmir valley, they all stem out of the feudal brahminical hegemony prevalent in this colonial-era system that begets bigotry at an industrial scale.

From aiding the perpetrators of the anti-Sikh genocide of 1984 to the large-scale arrests of Muslims, especially Kashmiris, under false charges of terrorism and planting stories in the mainstream press to fuel Islamophobia in the society during the 1990s and the 2000s, the Delhi Police didn’t spare an instance to show its bigoted brahminical character.

If one closely analyses its modus operandi, then the Delhi Police’s nexus with Hindutva fascism can be seen at the very first instance. While it planted stories in the press against the Muslims it falsely indict in terrorism cases, the release of most of such accused from the court after spending more than a decade in the jails is a testimony of the Delhi Police’s attempt to malign the Muslim community and conform to the narrative milled by the Indian rulers in the post-liberalisation era.

Fake encounters like the Batla House encounter, framing innocents like Delhi University’s professor late SAR Geelani, framing charges against Afzal Guru in the 2001 Parliament Attack case, to slapping sedition charges against the students of Jawaharlal Nehru University, there are endless instances that show how sheer bigoted the police force is in Delhi.

But why take the trouble when the Delhi Police isn’t denying the allegations and is comfortable with the reality getting exposed? The testimony of those tortured in the custody of the Delhi Police or those who suffered ordeal during its berserk, show how pathologically bigotry is ingrained in its cells. The Delhi Police’s nexus with Hindutva fascism is unapologetic and won’t change soon because there is no sign of a fundamental change in the class-caste structure on which it’s founded and draws its resources from. To expect the Delhi Police to turn into a constitution-abiding law enforcement agency with zero bias and extreme professionalism will be a disastrous fantasy that will immensely harm the democratic and anti-fascist forces. The Delhi Police must be considered what it’s — an appendage of the RSS — and nothing else.