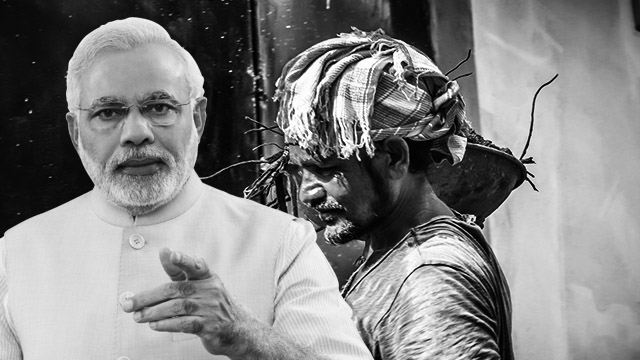 Ever since Prime Minister Narendra Modi declared a 21-day lockdown throughout India at 8pm of Tuesday, March 24th 2020, to “flatten the curve” of Coronavirus (COVID-19) outbreak in India, the sole purpose of the World Health Organization (WHO)-advised “social distancing” has been repeatedly defeated. Soon after Modi’s declaration, millions hit the streets, defying lockdowns in different parts of the country, including capital New Delhi, to buy food, essential items and medicines. They ignored the basics of “social distancing” because Modi didn’t tell them whether the shops will remain open during these 21 days or not.

The lack of clarity in Modi’s speech on the 21-day lockdown to tackle the COVID-19 outbreak triggered severe panic and a ruckus was created as people struggled while buying vegetables, grocery items, medicines and milk. The situation improved later only when different state governments clarified that the essential goods will be available during the 21-day lockdown period and that the shops selling grocery, medicines, milk, bread, fish and meat, and vegetables, etc, will remain open.

As millions went out to frantically buy essential items for themselves, the very purpose of WHO’s social distancing got defeated. At grocery stores, vegetable carts, dairy outlets, etc, people elbowed each other to place their orders and didn’t mind getting centimetres close to each other. A sense of panic, unseen since the declaration of the demonetisation exercise by Modi three and a half years ago, gripped the conscience of the people who could afford to purchase what’s needed. Those who couldn’t, due to lack of money, were driven to a different crisis zone.

The 21-day lockdown became a nightmare for the millions of daily wage-earners, workers of the unorganised sector and the toiling people. Carrying all their belongings, they started an exodus from the cities towards their villages, defying the brutal atrocities of the police on the way. The sheer apathy of Modi and his coterie towards the cause of the poor made millions — who otherwise had no chance of contacting COVID-19 infection —  vulnerable to not just the virus infection but also to starvation death, along with their families, that too on the empty highways.

Twenty-two people have reportedly died so far in their attempt to flee an imminent starvation death. The India that boasts of sending lunar missions is now going to see carcasses of dead poor, men women and children, on the fields and streets, like bovine animals. As a poet says, only their masks would remain intact.

Modi could only apologise and his government could only strengthen the lockdown by cracking the whip on those fleeing the ordeal of starvation and government officials who have helped these people out of humanity. But can he evade the responsibility of underestimating the catastrophe an unplanned lockdown will bring? Even a country like South Africa gave enough time to the people for lockdown arrangements. Modi, as the prime minister, gets daily intelligence briefing from different agencies and could’ve gauged the panic the decision will trigger.

Without making proper systems and preparations, how did Modi think the COVID-19 outbreak can be curbed? Or was this 21-day lockdown done deliberately to purge the poor, who are in abundance in India, according to some new fascist eugenics theorem? Or is it the method that Modi could think of to prevent the crowding of vulnerable people in the city hospitals, which would’ve exposed the pathetic condition of India’s public healthcare system? Or is it, as many accuse, a dress rehearsal for a total emergency clampdown, which Modi is reserving as the trump card to deal with a future major public upheaval?

Any of the above, or even all of them, can be the cause of this 21-day lockdown announced by Modi. At the end of the day, the rich and the middle class, who can stockpile essential commodities to last a long time, will remain unaffected by the inhuman nature of the 21-day lockdown and the regime’s sheer apathy towards the poor. Cocooned in their comfort zones, they can certainly cheer the police atrocities on the poor migrant workers or ask people to obey the government’s directives, but it’s the poor who have to face the brunt of the situation, as they have two roads before them, and both are leading them to death. History will remember these times, as it’s a period when the probability of death was defied by millions to embrace an imminent death because there was no third choice. There was no humanity left either.