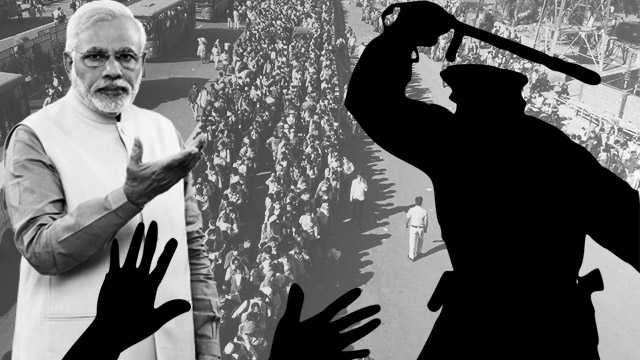 Police atrocities on people have been rising and so is the state’s sheer apathy towards the poor, since Prime Minister Narendra Modi declared a nationwide 21-day-long lockdown to combat COVID-19 outbreak. The lockdown is itself in question as it’s ill-planned, undergoing ad hoc changes and caused a major humanitarian crisis by triggering a massive migrant labour exodus.

Policemen in different states are competing with each other to exhibit their diabolical hatred towards people and unleashing macabre atrocities on them. This is done, of course, with the endorsement of their respective state governments. Be it a state ruled by Modi’s Bharatiya Janata Party (BJP) or any of its opponents, the police’s actions didn’t show any variation.

In Howrah of Trinamool Congress-ruled West Bengal, the police killed a young man who went out to buy milk for his child. In BJP-ruled Gujarat, the police beat up a man who tried to attend his mother’s funeral in Rajasthan. A BJP lawmaker in Yogi Adityanath-ruled Uttar Pradesh, declared rewards for policemen if they shoot lockdown violators. In Uttar Pradesh, it’s not only the police atrocities but the system’s hatred towards the poor migrant workers, returning to their villages, that was exhibited when a toxic chemical was sprayed on the poor in Bareilly to sanitise them on the street itself, rendering them with a burning sensation on skin, eyes and also left them wet in the open.

In Assam, a Congress party lawmaker wrote to the BJP government about police violence. Similarly, in Patna, the police fired at a truck driver ferrying vegetables when he refused to pay Rs 5,000 as a bribe. In Delhi, the police fired teargas shells at the migrant workers fleeing an imminent economic doom.

The police’s advantage is the lack of public resistance due to a general fear of COVID-19 infection that has gripped the entire country. The fear of the COVID-19 outbreak has made the urban middle class and the elites unapologetically support the police’s goriest atrocities on the less fortunate people on the streets, especially the migrant workers, who are treated as flotsam. There is no vigorous outrage over such human rights violations. There is no attempt to safeguard the rights of the poor people, as the mainstream politicians, following social distancing, have considered them as expendables.

Much before these atrocities, the police demolished the protest sites all over India, including the historic Shaheen Bagh protest site, where Muslim women were carrying out an indefinite peaceful sit-in demonstration against the Modi regime’s controversial Citizenship (Amendment) Act, 2019 (CAA), and National Register of Citizens (NRC). The graffitis and murals on the walls of Jamia Millia Islamia University against the CAA and NRC were whitewashed. The government has done these using the pretence of fighting COVID-19, knowing well that there will be no resistance. Nine people were arrested from Shaheen Bagh and three of them got bail on Sunday, March 29th 2020, from Delhi High Court, which imposed a restriction on them from posting anything against the CAA or NRC, on social media. In the season of a global pandemic, no one bothered to question the logic behind such a rider in the bail terms.

It’s evident that these atrocities aren’t spontaneous actions of fringe and rogue policemen, but inalienable parts of a bigger obnoxious agenda pursued by the Indian ruling classes. The reluctance of the critical and democratic voices to question these atrocities has boosted the boisterous policemen’s morale. Forgetting the constitutional obligation of maintaining law and order, ignoring that they have neither any right to hit anyone, unless in self-defence, nor any right to punish people — an exclusive right of the judiciary — the policemen have been operating with utmost impunity because the state is patronising such acts. Did the Supreme Court take a suo motu cognizance of the crimes committed by the police? If not, then why?

If this 21-day-long lockdown is seen as a dress rehearsal of the long-pending police state project envisioned by the Rashtriya Swayamsevak Sangh (RSS), the BJP’s parent body, then it won’t be politically wrong. As the Hindutva fascist RSS wants to establish a Hindu Rashtra (a theocratic Hindu state ruled by elite, upper-caste comprador capitalists and feudal landlords) by 2022, it’s imperative for it to prepare the ground. After seeing the massive public outrage against the CAA and NRC, the BJP has decided to take no risks. It’s keen to adopt new tricks and strategies to cajole the majority Hindus to do what it asks them to do or follow.

As the COVID-19 situation is worsening rapidly in India, the BJP won’t be able to maintain the status quo for long. There is already a food shortage in cities, caused by the frantic stockpiling by the rich and urban middle class. The public healthcare system is in tatters and there is no way that it could treat a community outbreak of COVID-19. Plus, India neither has enough protective equipment nor testing facilities, which is essential to stop the spread of the disease.

This means, the country is actually going towards a total cataclysm, which neither Modi nor the entire RSS-BJP leadership can avert or counter. The things they can do now are, use their police to persecute the common people to establish a reign of terror, suppress information about the precarious situation, spew communal venom to distract the masses and seek divine intervention or growth of an antibody in the human beings to stop the catastrophe.

To safeguard the hegemony of foreign monopoly-finance capital and their Indian crony-comprador allies from the poor people’s outrage, the Modi regime will continue strengthening the police state. It’s only the collective resistance by the poor people against police atrocities, their struggle against marginalisation and oppression, that can bring a qualitative change in the Indian politics if such actions are led consciously by a visionary vanguard organisation. The principal task for such organisations is to stop remaining cocooned in their shells and come out to build up active resistance by leading the people.