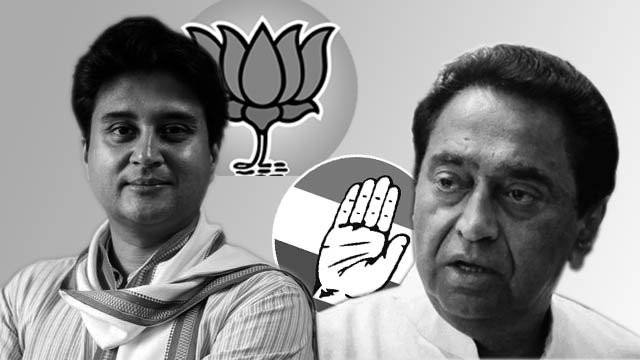 The 15-month-old Congress party-led government in Madhya Pradesh is in deep crisis due to the defection of Jyotiraditya Scindia to the Bharatiya Janata Party (BJP) along with 20 members of the legislative assembly (MLAs). The Madhya Pradesh political crisis is a major setback for the Congress party as it’s one of the few states ruled by it at a time when its existence is under threat.

In the 230-seat-strong Madhya Pradesh Assembly, the Congress party won 114 seats in the 2018 assembly election, while the majority mark is 116 seats. The BJP won 107 seats. The Congress party managed to form a government with the support of two Bahujan Samaj Party (BSP), one Samajwadi Party (SP) and four independent MLAs, under the leadership of Kamal Nath, the notorious culprit of 1984 anti-Sikh pogrom in Delhi.

Scindia, who was earlier leading the state party during the BJP’s tenure and engineered its victory, was sidelined by both Nath and Rahul Gandhi, who was then the Congress high command, despite his closeness to the Gandhi family. He was even not made the chief of the state party and was blamed for sabotaging during the 2019 Lok Sabha election. The sidelining of Scindia not only opened factional feuds within the Congress party but also provided then BJP chief and Union Home Minister Amit Shah a chance to poach the Gwalior royal family’s member, whose other relatives have been in the BJP since a long time. Scindia had signalled his intention of quitting the Congress party in the past and the BJP also indicated, on several occasions, its willingness to absorb him. Yet, neither former party chief Gandhi, his mother and acting party chief Sonia Gandhi nor Nath took any steps to shield themselves from an imminent onslaught.

The Madhya Pradesh political crisis isn’t a new shock for the Congress as it had lost Karnataka to the BJP’s poaching drive earlier. Since mid-2019, when the BJP usurped power in Karnataka by buying MLAs of the Congress and Janata Dal (Secular), and almost engulfed the entire Congress party’s MLAs in Goa, there have been rumbles over a similar coup in Madhya Pradesh and Rajasthan. Yet, the Congress party remained indifferent and disarrayed. Nath himself brushed aside the allegations against Scindia’s coup attempts as rumours and said the party is united, even when Scindia supported Prime Minister Narendra Modi’s decision of abrogating Article 370 and 35A and bifurcating Jammu & Kashmir on August 5 2019. Nath and the Congress high command woke from their slumbers only when Scindia hit back and took away 20 MLAs, including six ministers, and rendered Nath’s government in minority.

Right now, there are two vacant seats in Madhya Pradesh Assembly, and there is news that the BSP and SP MLAs are also bought by the BJP, which wants former chief minister Shivraj Singh Chouhan, the notorious Vyapam scam accused, to lead the party in forming the next government. Each Congress party MLA is getting Rs 250 to Rs 300 million for switching allegiance, as alleged by the former chief minister and Congress party’s stalwart Digvijaya Singh. Scindia is allegedly getting ten times the amount plus a Rajya Sabha berth from the state, and he is likely to be inducted in the Union ministry by Modi and Shah.

This horse-trading isn’t new or surprising in a country like India. The BJP has shown repeatedly how it can buy anyone in parliamentary politics and can win any state with sheer money and muscle power. With this poaching exercise, the Madhya Pradesh political crisis has also alarmed states like Maharashtra and Rajasthan, where the Congress party has managed to form governments with a very thin majority. For the Congress party to survive in the electoral arena, it’s imperative to safeguard its government in these two states. However, due to the Congress party’s ideological bankruptcy, prevalent hunger for money and power, it’s impossible for it to stop the BJP’s juggernaut, as most of its leaders are prone to defection.

The Madhya Pradesh political crisis will sink the boat of Nath and the Congress party. The BJP is helping in destroying the façade of the sham democracy used to hoodwink the poor for a long time. It’s better for the oppressed, especially the workers and farmers, to understand now that what’s Congress party today will become the BJP tomorrow and their emancipation from oppression and exploitation isn’t rooted in the parliamentary arithmetics, but in vigorous movements outside the Parliament for people’s democracy, equality, justice and dignity.