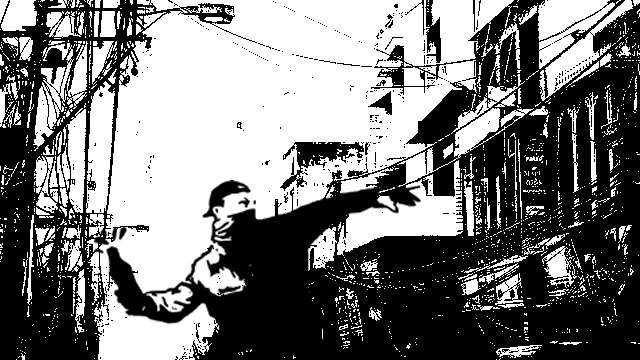 The evening of 1 March was a tumultuous one for those living in Delhi. Throughout the city, a rumour of rioting spread in flashes, terrorising the common people out on the streets, resulting into mass panic and frantic attempts by people, pedestrians and those riding vehicles, to rush to a safer location, though there is none in the city any more. Though it took a lot of effort by sensible people from all over the city to normalise their local situation, the rumour of rioting was so identical in each area, spread across the city, from Tilak Nagar in western Delhi to Jamia Nagar and Shaheen Bagh in southeastern Delhi that there is a popular doubt that it was done intentionally to test the people’s response and draw future plans of pogroms accordingly.

Following the Delhi anti-Muslim pogrom that took place between 23 to 27 February 2020, the situation of the city is volatile and panic reigns in the streets of the Muslim ghettos. There is an ominous and uneasy calm in the Muslim localities and mixed-community localities of the city, especially where the low-income groups live. Any single alarm can have the potential to trigger mass panic and force people to seek safe cover frantically. This was seen on 1 March evening, not just in one locality or two, but throughout Delhi.

In a ghetto, like Jamia Nagar, a panic call closed down all shops and forced all rickshaw-pullers, handcart-puller street vendors and the shoppers to rush in search of a safe abode. The entire market of Zakir Nagar was deserted in a matter of a few seconds, as everyone hid in other people’s garages, shops and streets fearing the unknown. It took a lot of effort to assure the people of normalcy prevailing and persuade them to carry on their regular business. The local politicians, religious clerics and community members had to hit the streets and announce through mosque loudspeakers that there is nothing to be scared of and to avoid rumours.

The same scenario happened in Ramesh Nagar and Tilak Nagar localities, while there were also rumours of rioting in Madanpur Khadar and Jasola bridge connecting the Muslim ghetto of Shaheen Bagh with its posh Hindu neighbourhood. Many even claimed that the Hindutva fascists have attacked Shaheen Bagh protesters and some claimed that there was rioting in Karol Bagh. While each of such information was a rumour, how they were spread isn’t known. The modus-operandi of the rumour spreading remains unknown until the filing of this report, while the story remained the same for all localities.

People in the areas where the rumour of rioting was spread claimed that some scuffle between a few young men fanned the fear. The same thing was said in Tilak Nagar and Jamia Nagar, which are far apart from each other. This shows that there was no pun intended in this panic mongering, rather, it was a conscious effort by an organised force that has the capability to frighten the people of an entire city and trigger immense tension among the people. The rumour of rioting could have also triggered new incidents of communal violence in the mixed-community localities, however, it was the people’s maturity and sensibility that stopped the situation from worsening.

The Muslim community of Delhi has suffered macabre atrocities about which they had earlier read or heard from others. In a few days, they have lived and suffered the experience of 2002 Gujarat pogrom and 2013 Muzaffarnagar pogrom. The traumatised Muslims know that the situation won’t normalise soon, rather, until Prime Minister Narendra Modi and his Bharatiya Janata Party (BJP) are ruling, there will be no peace for the community. The rumour of rioting, the fake news of Muslims being butchered in the neighbourhood, etc, will further cause agony for the community, which has been at the receiving end since the last six years.

As the Modi regime and the BJP plans to establish a naked corporate-feudal dictatorship under the garb of a Hindu Rashtra — a theocratic brahminical state — the attacks on Muslims will intensify in the days to come. Neither the state apparatus nor the international community will come to the rescue of the community. During such attacks, such rumour of rioting will be spread in Delhi and other areas to check the people’s response. Once a psychographic analysis of different demographies is prepared by the rumour-monger rioters, pogroms will be conducted accordingly to inflict maximum injuries. This poses an imminent threat for Delhi’s people.