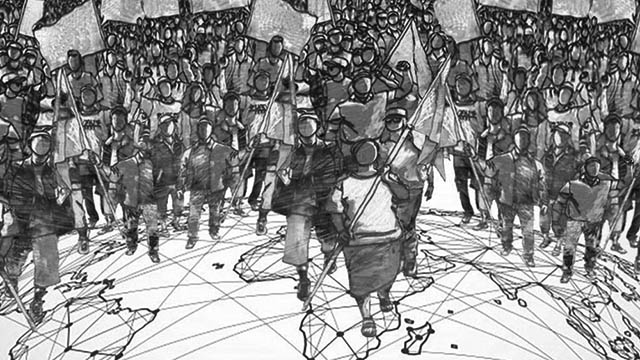 It was announced by the Indian government that a nation-wide lockdown would be imposed from March 25th onwards till April 14th. This lockdown was then extended till May 3rd and then till May 17th. What is wrong about this lockdown is its unorganised attempt to abruptly shut down everything. This has resulted in a large humanitarian crisis of homelessness, hunger and existential fragility. The sudden announcement of lockdown without any previous governmental information has increased the vulnerability of the people belonging to the lower echelons of the society such as the migrant workers. Migrant workers have been bearing the brunt of an ill-planned lockdown since the beginning of the COVID-19 pandemic and now they are being tossed about by various state governments as the dirty dregs of society.

With no wages, food and shelter in the urban areas, the migrant workers had to return to their villages. But as a result of the unplanned and stringent lockdown, there had been a complete suspension of transportation services which compelled the workers to make their way home on foot.  In this arduous and perilous journey of sometimes more than thousands of kilometres, more than 70 migrant workers have died due to road accidents. Recently, 16 migrant workers were crushed by a train when they were trying to reach the Aurangabad Railway Station to catch a train home. In the state of Karnataka, government officials and a coterie of industrialists have colluded to forcefully prevent workers from reaching their homes in anticipation of a labour shortage. This kind of crony capitalist measure ruthlessly reduces labourers to “modern indentured slaves”.  The weakening of the working class has been achieved through clamorous deregulation and race to the bottom policy. States such as Uttar Pradesh, Madhya Pradesh, Maharashtra, Goa, and Odisha have realised that the current lockdown has provided them with an excellent opportunity which they can appropriately exploit to pursue what Pierre Bourdieu has termed as “flexploitation”.

Flexploitation refers to the relentless search for labour-market flexibility, which ultimately aims to attune the labour laws to the caprices of capital. The “easing of labour laws” which has been done by Indian states amid an existential crisis, drives home the crux of this argument about the labour-market flexibility. The new “flexible labour laws” have increased the shift duration from 8 hours to 12, weakened the already frail working class of India through the suspension of some important laws such as the Minimum Wages Act, Trade Unions Act and Inter-State Migrant Workmen Act. All these laws had as their common aim the general welfare of the working class and their protection from economic exploitation.

These negative aspects of government policies have been carefully glossed over by neoliberal economists and the associated network of free-market fundamentalists. Rajiv Kumar, the vice-chairman of government think tank NITI Aayog, has euphorically stated that “A new beginning has been made and more states will hopefully follow”. Amitabh Kant, the CEO of NITI Aayog, has further added that “These are the boldest and bravest reforms and will free the country from antiquated and outdated laws”.

These statements highlight the cheerful indifference of big policymakers towards the dispossessed people such as migrant workers who are being treated as the detritus of the neoliberal world order. It is important to note here that these sweeping labour reforms have not gone unchallenged and several trade unions are aiming to present a unified oppositional front to these unchecked excesses of state governments. Tapan Sen, the General Secretary of Centre of Indian Trade Unions, has correctly claimed that “The capitalist class sees an opportunity in this crisis”.

India is certainly not alone in this continuous drive towards a profit maximising rational order and other countries are equally participating in this de-democratising project of right-wing populism. The USA is working under the full command of globalised finance capital and Donald Trump is accordingly going to re-open the economy next month. Many have predicted that this would unleash a second wave of infections with even more devastating consequences for the US economy. But the US president is callously obdurate when it comes to financial matters and is perfectly convinced that the pandemic would get vanquished by his finance-first policy.

Here, it is necessary to show the oscillating boundaries of authoritarian neoliberalism, which Trump is perilously practising. Trump maintains his popular appeal by re-articulating the cultural anxieties of Americans suffering from the burdens of financialised neoliberalism. This has been mainly done by foregrounding anti-immigration sentiments and generating a racialised cultural backlash against hapless immigrants who are dubbed as “undeserving receivers of welfare gains”. This generally leads to an ethnonational ideological war against immigrants and achieves a necessary class displacement by crucially shifting attention from class divisions to ethnic-cultural divisions. But now, in the midst of a crisis, Trump is stuck in a quagmire where he has to conspicuously follow the dictates of the corporate-financial oligarchy and is unable to provide a minimal cultural consensus for his ethnically-racially unadorned neoliberal policies.

This is highlighted by his statements which are quite different from his inflammatory tweets. Trump has openly said that “There will be more death”.  Banal statements like these only serve to confirm the tentacular power of neoliberalism and strongly show the utter pusillanimity of Trumpist power in front of the all-pervasive force of monopoly capital. Moreover, the complete subjection of a seemingly defiant US president to the laws of capitalism can undermine the portrayal of Trump as a hyper-muscular strongman.

Along with this, the entire project of reclaiming the lost glory of American empire is partially shaken as the US citizens apprehend the absence of any unified American empire and instead, greatly feel the frailty of everyday life when the strongman Trump presents them with a seemingly inauthentic reality of existential insecurity.

Make America Great Again only works when hyperventilating cultural mobilisation is fused with splurges of economic chest-thumping and hyper-muscular bluster. In the present Coronavirus crisis, the US’s unemployment rate is 14.7%, household debt is US$14 trillion and more than 88,000 deaths have been recorded. These aggravating economic circumstances can exert some influence on the American people and a crisis has the potential to generate different subjective viewpoints.

Despite some objective situations exercising a negative influence on right-wing populists, it is not necessary that they will be electorally defeated. This ability to remain resilient is a part of their tactic of stitching a common overarching framework from myriad separate demands. In the Coronavirus crisis, this is done by framing a narrative of the oneness of a nation in which various sociological-economic gradations are surprisingly subsumed under the category of nation.

National commonness is then used as a populist motor for demagoguery where the class specificity of COVID-19 pandemic is ignored by saying that “all citizens have to collectively bear this crisis”. One should still remember that social distancing and self-isolation is a class-based privilege because neither the unfortunate working class nor the precariously placed migrant workers are able to shield themselves in safe homes.

On May 8th, Trump said that “This is a big moment in our history because we are opening up our country again. People are coming out, they are starting to go around and see what’s happening, they have been short of shut down as the expression goes but we are opening up our country. People want our country to open up”. This desperate attempt to equate a death-dealing measure with the popular will of the people shows the extent to which the president is trying to hide the internal economic fissures and inequalities of US economy with a broad-brush false claim about the national unity of American people in supporting a patently neoliberal policy.

The left-wing revolutionary camp has to recognise that the crisis is presenting many opportunities for the prospect of class struggle. Complete disillusionment with the neoliberal right-wing populist regime will only happen when the socialist agenda is advanced with a special emphasis on the widening class divisions and the propagandist tactics of the New Right.

In opposition to a generalised and empirically ungrounded nationalism of the right-wing, leftists have to advance a comprehensive class struggle against global monopoly-finance capitalism. The new class struggle against the bourgeoisie has to include a wide social base which not only comprises of the working class but also includes feminist movements and environmental campaigns. Accommodation of diverse social forces can only happen if the left consistently affirms the continued relevance of class struggle and unites different ideological worldviews by juxtaposing them to the hegemony of capitalists.