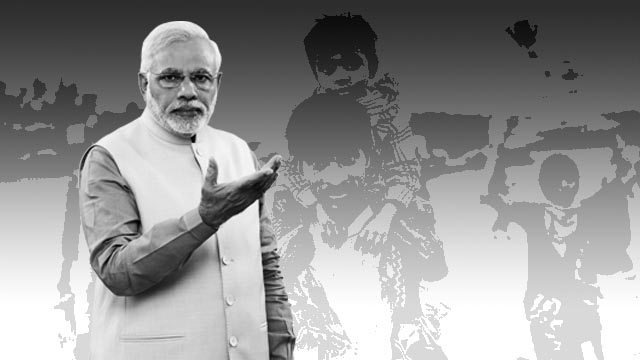 Prime Minister Narendra Modi addressed India for the fourth time during the Coronavirus (COVID-19) pandemic through his pre-recorded televised speech on May 12th 2020. Though he was to inform about the extension of the present lockdown, which will is supposed to end on May 17th 2020, the prime minister used the occasion to majorly drive political propaganda of his ruling Bharatiya Janata Party (BJP) and dealt with the issue of lockdown extension only for a few minutes after 31 minutes of his speech, saying that the new guidelines will be issued after consulting with the states. Despite mentioning “workers” five times and proposing a mega economic package, he didn’t mention any relief for the poor “migrant workers” facing immense difficulties, including starvation and a lack of transportation to their home states.

Modi announced a forthcoming mega economic package worth Rs 20 trillion. Though Modi didn’t disclose the content and said Finance Minister Nirmala Sitharaman will spill the beans later from May 13th onwards, it’s understood that this package amount includes the already-announced amounts, including the Rs 1.73 trillion-worth package announced by Sitharaman earlier in March, ie, 0.8% of the GDP, which had several existing government schemes clubbed in it to hoodwink the masses, and the Reserve Bank of India’s (RBI) cut in interest rates and liquidity boosting measures that totalled to Rs 6.5 trillion, ie, 3.2% of the GDP.

While there is a cacophony in mainstream press’s newsrooms and middle class’s drawing rooms over the contents of the package, there are also unconfirmed reports that the RBI will inject an additional Rs 5 trillion as liquidity for the MSMEs as part of the new package. This when the previous amount remains largely unutilised as most of the MSMEs are wary of taking loans at this hour of crisis and are requesting the government for packages to pay the wages of their workers and their social-security benefits from the Employee State Insurance.

In case this Rs 5 trillion is announced as additional liquidity, then it will be calculated as a part of this Rs 20 trillion package. It’s not clear whether Modi will share some money from his Prime Minister’s Citizen Assistance and Relief in Emergency Situations Fund (PM CARES Fund) to revive the economy. The PMCARES Fund raised Rs 65 billion in the first week of April itself.

It’s also not clear how the government will fill the fiscal deficit that will result out of this Rs 20 trillion-worth package, especially when its Goods and Services Tax (GST) collection has been extremely low in March 2020 due to the lockdown. The government didn’t even divulge the April 2020 GST collection figures in May. It’s not known how the expenses will be covered except for taking loans from big sharks like the World Bank, the International Monetary Fund (IMF) or the Asian Development Bank. The PMCARES Fund, the money in the account of the National Disaster Relief Fund and the fund accumulated through the high taxes on fuel can provide only a little support, as only a foreign debt can meet the expenses right now.

During his speech, Modi focused on “bold reforms”, which seems to be a large-scale and unapologetic corporate assault on Indian poor, turning each centimetre of India into a fiefdom of corporate bandits. As a prelude to this “bold reforms” project Modi cunningly discussed the “opportunity” that the COVID-19 pandemic has provided India to harp on and become “self-reliant”. This was done purposefully to titillate the Hindutva chauvinist mindset of India’s politically-crucial upper-caste Hindu elites and middle class. It’s evident that a government that depends on foreign capital, technology, aid and support at each juncture, can’t assert independence, but then when did logic matter to Modi’s feral support base?

To avoid ambiguity and misinterpretation, the prime minister was quick to clarify that his idea of “self-reliance” isn’t about becoming economically independent by leaving the neo-colonial globalisation setup of World Bank, IMF and the World Trade Organization (WTO). He said he wants to operate his self-reliance within the neo-colonial world order led by the World Bank-IMF-WTO Troika and wants to remain in the globalised supply chain of international capital, which uses India as a mine of free natural resources, raw materials, cheap labour and one of the most promising markets. Though there were no further indications, and Modi mentioned that the self-reliance will come through the “bold reforms” in the four sectors of land, labour, liquidity and laws, it gives a broad picture of what Modi and his regime plans.

What this plan of Modi aims at is to project India as a manufacturing hub for the global big monopoly-finance capital-owned corporations, who, the Indian mainstream press claims, are fleeing from China following the COVID-19 pandemic. What Modi’s plan seems right now is to snatch the hard-won rights of the working class, to give away land, forests and natural resources to big foreign capital and their Indian crony-comprador lackeys at a throwaway price by doing away with the labour and land acquisition laws. This means the government will amend all laws that provide even the thinnest and the weakest of safeguards to the poor and the vulnerable sections. One of the important aspects of this is the amendment of the labour laws, which is successfully implemented by the BJP in Gujarat, Haryana, Karnataka, Madhya Pradesh and Uttar Pradesh. Now the BJP will roll this out on a pan-India basis. The next will be, of course, the land acquisition law, which Modi desperately tried to amend in 2015 but failed due to resistance.

The propaganda that the big corporate houses are looking to shift their production facilities to India from China due to the COVID-19 is sheer nonsense. Even if the corporates want to flee China due to the US-China Trade War, they aren’t interested in India. The big companies aren’t coming to India, if we see the information of companies that have shifted from China fearing US President Donald Trump’s adverse taxation policies, then we will find that Indonesia, Taiwan and Vietnam got most of the investments in the last few years.

In the post-COVID-19 phase, China is restoring its economic activities at a lightning speed, hence, there is a less likelihood of Modi wooing the corporates from China easily. The failure of the “Make in India” scheme of Modi is visible in the sheer downfall in the manufacturing sector since 2014 onwards. The pre-COVID-19 economy was already in tatters and it will be hard to depend on foreign capital investment, which itself is in a quagmire of extreme crisis.

Even if the corporate houses agree to set up shops or expand their capacities in India, they will do so not by investing from their coffers but by raising capital from the money market and by taking loans from big banks, exposing the latter to vulnerabilities. The collaterals, against which the loans will be given, can’t be liquidated in real terms to recover losses and thus the banking system will collapse. It’s simply not feasible for global corporations to invest in India, with its law and order problems, lack of proper infrastructure and a host of difficulties.

Modi’s address to the nation is a foreword to a grotesque story in which the poor labouring masses will suffer the most. The packages of Modi won’t help the common people. They didn’t help the common people ever. It’s known to the Modi regime and the BJP that the people’s resentment will grow once anti-people policies are rolled out and the economic conditions of the workers and peasants deteriorate. Therefore, with such labour law amendments, land acquisition law amendments and other measures, will come restrictions on democratic rights, gagging of the press and suppression of dissent using a diabolic Hindutva fascist rage.

Still, the Modi regime won’t win, because, after the initial setbacks, the working class, the peasantry and the toiling masses won’t give up but fight back against the Hindutva fascist state’s aggression on their lives and livelihood for their very survival. None of the doles and other baits dangled before the hungry people will provide safeguard to the fascist regime. Its fall will be inevitable.