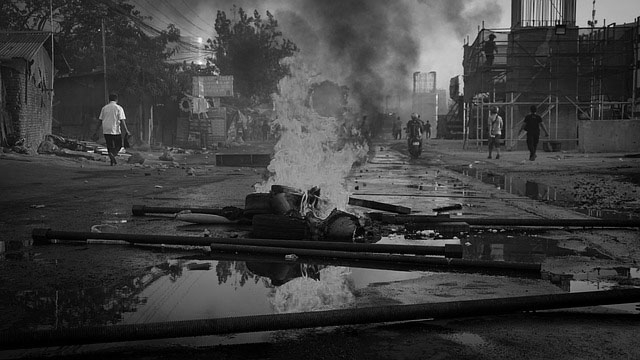 After a large number of Muslim hoodlums rampaged in Bengaluru over an alleged derogatory social-media post on Prophet Muhammad, the founder of Islam, by the nephew of Pulkeshi Nagar MLA Akhanda Srinivas Murthy, belonging to the Congress party, the ruling Hindutva fascist Bharatiya Janata Party (BJP) started a new series of Islamophobic vitriol. The Bangalore riots became a viral search trend on Google with over one million hits. The Hindutva fascist camp got the ammo to not just vilify the Muslims, but also to target the right-wing Social Democratic Party of India (SDPI), which has been under the radar of the ruling clique for some time and the latter has been looking for an opportunity to ban it.

It’s alleged that P Naveen, the nephew of Murthy, posted a derogatory post on social-media insulting the Prophet. This incited a section of Muslims who attacked Murthy’s Kaval Byrasandra residence. While the police arrested Naveen, there was an alleged attempt to lynch him. A mob pelted stones at the police and tried to attack and ransack the DJ Halli and KG Halli police stations. The police resorted to baton charge, followed by teargas attacks and firing upon the mob.

Three men, all Muslims, were killed in police firing during the Bangalore riots, 110 have been arrested for rioting, while 50 policemen are allegedly injured due to stone-pelting by the rioters. The rioters even attacked two prominent Muslim MLAs from the Congress who came to stop them. While the anger and rampage purportedly displayed the anger of a section of Muslims over the insult of their Prophet, a critical political dissection of the Bangalore riots will show a complex web of events and a plan to ban the SDPI by the BJP government of BS Yeddyurappa.

Though the Hindutva fascist ecosystem, especially the BJP’s notorious IT Cell, got the ammo to fire salvo targeting the Muslims and depict the community as a violent one, most of Karnataka’s Muslims, as well as that of India’s, condemned the rioting and disassociated the community from such action. A large number of Muslim youth formed a human chain to protect Hindu temples from rioters, while another section of Muslim men tried their best to stop the burly rioters. But notorious Hindutva fascist rabble-rousers like Bangalore South MP Tejasvi Surya, Revenue Minister R Ashok and Tourism Minister C T Ravi have spewed venom by suggesting penalising the accused for the loss of property without waiting for a fair trial by a court of law, a model the BJP has successfully implemented in Uttar Pradesh.

Even though this “rioting” over the alleged “defamation” of Prophet Muhammad seems ubiquitous and quintessential of the Muslim community in the subcontinent, the fact remains the opposite. Though the Islamic religion, its doctrine, Prophet and holy symbols are regularly vilified and insulted through a plethora of ways by rabid Hindutva fascists on social-media, especially since Narendra Modi won his second consecutive term last year, the majority of the Muslims have learned ignoring the filth. It’s only some isolated cases that see sparking of such fiery flames of carnage like the Bangalore riots over Naveen’s post.

Such sudden outburst, an organised attempt to lynch Naveen at Murthy’s residence, the stone pelting at the police, vandalism and attack on the DJ Halli and KG Halli police stations show that the Bangalore riot wasn’t a spontaneous act of rioting. The men came prepared and executed the actions in an organised manner, which can’t be possible without planning. Their violence looked pre-planned. The police detained SDPI leader Muzamil Pasha, without verifying his involvement in the Bangalore riots. This showed that this violence could be a smokescreen used by the BJP to push the demand for banning the SDPI and its associated organisations like the Popular Front of India (PFI).

One can see a pattern that’s quite a leitmotif in Indian minority politics. The images of alleged rampaging by the Muslims, as in the case of the Bangalore riots, were seen in West Bengal’s Kaliachak in 2016, in West Bengal’s Baduria in 2017, and different other places. The template remains the same, the insult of Prophet Muhammad, and the attempt is always made to provide ammo to the BJP. As Yeddyurappa has been looking for the right opportunity to ban the SDPI and PFI, this Bangalore riots and the subsequent police actions paved the way for it.

Ever since the right-wing SDPI took part in the movement against Modi’s new citizenship matrix in December 2019 and January 2020, the BJP has been desperate to ban it. Home Minister Basavaraj Bommai and Law and Parliamentary Affairs Minister JC Madhuswamy had informed the press about such an intention. Now with the Bangalore riots captivating the headlines, the Kannada media and the English media will carry-out the stereotyped Islamophobic ranting to malign the community.

The Bangalore riots will remain as a reminder for the Muslim community that if it lowers the vigil and fails to identify the traps laid by the Hindutva fascists, it will suffer not just due to state repression but also lose its hard-won rights in the Indian political space, the right to be represented. The BJP isn’t eager to allow the Muslims any agency to ensure it satiates the bloodlust of its hardcore supporters. Now it’s only the working people who can stop this juggernaut against democratic rights through their incessant struggles.