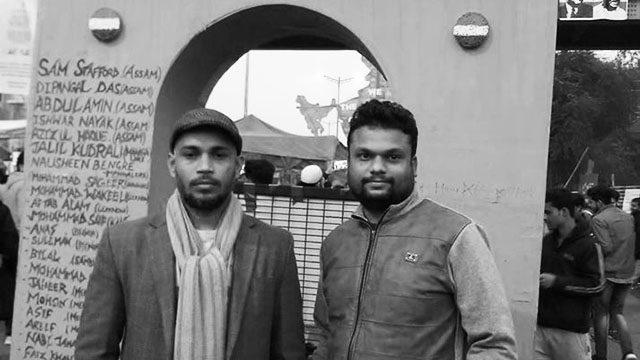 The Bharatiya Janata Party (BJP) isn’t in a mood to relent in its incessant political debauchery during the COVID-19 pandemic, using which as a subterfuge Prime Minister Narendra Modi’s government is implementing one after other anti-people laws. The recent propaganda over Shaheen Bagh activist Shehzad Ali joining the BJP, peddled by the party’s leaders and its servile media outlets, from ANI, OpIndia, The Times of India, etc, is one of such acts.

“Shaheen Bagh activist Shehzad Ali joins the BJP”, this became a viral headline after the BJP’s servile ANI run by Smita Prakash, a Hindutva fascist propagandist, published the news of a man, known hitherto for political double-dealing and opportunism, joining the saffron outfit in the presence of its state president Adesh Gupta. This so-called “Shaheen Bagh activist”, Shehzad Ali, was never involved in any sort of activities in the Shaheen Bagh women’s movement against the new citizenship matrix of the Modi regime.

While activists like Sharjeel Imam, now demonised and imprisoned by the Hindutva fascist state machinery under false charges, mobilised the women in Shaheen Bagh and conceptualised the idea of a resistance movement against the Modi regime’s tricky Citizenship (Amendment) Act, 2019 (CAA-2019), the likes of Shehzad Ali were never to be found in any activities of the movement. Maybe he had visited Shaheen Bagh as a tourist, like numerous other people, but apart from any such visit, he never had any connection with the Shaheen Bagh movement against CAA and the National Register of Citizens (NRC).

It has been found that this Shaheen Bagh activist Shehzad Ali isn’t even a resident of the Muslim-majority Okhla area, but of the Hindu-majority Jasola Gaon and had been a member of different parties like the Aam Aadmi Party, Samajwadi Party, etc, at different points in time. Despite being politically promiscuous and ideologically fluid, he is projected as a prized catch to create a narrative, which is an extension of the BJP’s vilification campaign targeting the Shaheen Bagh movement and the overall anti-CAA movements spearheaded by the Muslim women and progressive-democratic forces all over the country.

The BJP’s agenda behind this move is to show that the Shaheen Bagh movement has capitulated to its Hindutva fascist juggernaut, especially after it organised a ghastly anti-Muslim pogrom in North East Delhi in February 2020, after losing the assembly election. The forceful eviction of the Shaheen Bagh movement under the garb of enforcing COVID-19 lockdown was used as an optics to show the dismantling of the massive anti-government protests in the 21st century India. Now, by showing the inclusion of this so-called Shaheen Bagh activist Shehzad Ali in the party, the Modi regime will be pushing the National Population Register (NPR) exercise with much vigour. The BJP wants to demoralise any opponent who would plan to mobilise people against its obnoxious agenda.

The Modi regime used the BJP’s brute majority in the Parliament to pass the CAA 2019 with a sole intent to discombobulate the majority of Hindus, especially the poor tribals and ostracised Dalits, so that they don’t boycott the NPR exercise. The NPR is the catalyst of the draconian National Register of Indian Citizens (NRIC or NRC), which the CAA 2003 mandated under section 14 (A).

Though the Congress party-led United Progressive Alliance government enacted the CAA 2003 in December 2004, and began the process of NPR through the Aadhaar unique biometric ID programme, the BJP gave the NPR programme a full thrust to ensure it can snatch citizenship rights and render millions of poor, especially the marginalised Dalits, tribals and minorities, disenfranchised so that they can be turned into cheap labour for the corporations that sponsor the Hindutva fascist camp.

Though the CAA 2019 has no provisions to snatch the citizenship of any Indian citizen, unlike its predecessor CAA 2003, the Modi regime and its mainstream opponents have been peddling lies over this Act. Both sides have been confusing people. The CAA 2019 provides citizenship exclusively to non-Muslim refugees from Afghanistan, Bangladesh and Pakistan, who came to India on or before December 31st 2014 due to religious persecution. Citing this, while the BJP fools the Hindus that if their names are struck-off during the NRC, they can get citizenship through the CAA 2019, the mainstream opposition deceives the Muslims that the NRC and CAA 2019 will jointly snatch their citizenship, without disclosing the real threat.

However, the CAA 2019 has no such provisions, as it’s enacted to provide citizenship to only 31,313 non-Muslims from Afghanistan, Bangladesh and Pakistan who have already registered with the Government of India as refugees fleeing religious persecution. Still, the smokescreen is created so that the Hindus and other non-Muslim communities consider the CAA 2019 as a safeguard and stay aloof from the anti-NPR and anti-NRC movements. This delusion of the poor non-Muslims, especially the Dalits and tribals, gave the BJP leverage and it projected the Shaheen Bagh-style movements as Muslim-only affairs and spread Islamophobia over it.

Now, with charlatans like Shehzad Ali and other shenanigans to bamboozle the non-Muslims, the BJP will try to execute the NPR programme throughout India. The lack of a grassroots anti-NPR movement, the non-participation of non-Muslims—who will suffer the most due to the NRC—in the NPR boycott movement and the confusion regarding the CAA 2019, is helping the Modi regime in realising its goals. Top this with the brutal police state that has shed all its sheen to expose the grotesque fascist character of each institution.

It’s imperative to expose the BJP-media nexus creating props like “Shaheen Bagh activist Shehzad Ali” to deceive the masses and wean away from the majority of Dalits, tribals and backward caste Hindus from the fold of the Hindutva fascist camp. The NPR exercise isn’t postponed until eternity, as many opportunists would make people believe. Rather, it’s at the doorsteps. It’s time to pick up courage and unitedly boycott the NPR and build up massive movements to force the government scrap the CAA 2003, the source of all evil and restore citizenship by birth as the original Citizenship Act, 1955, provisioned.