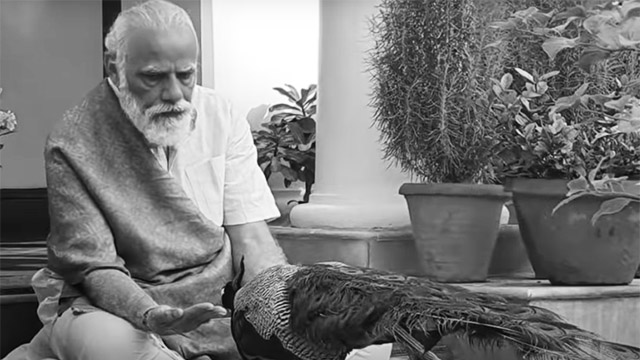 Prime Minister Narendra Modi has a penchant for showcasing extraordinary lifestyle to his aspirational fans. He will post videos and photos from his daily life, including his health regime, to inspire his fans. Modi is often criticised for unapologetically following those on social media who abuse women and issue rape threats. It’s an exceptional surprising optics when one would see Modi feeding a peacock at his official residence, as shown in a video posted on social media.

The video showing Modi feeding a peacock during his daily workout session may be interpreted by his large fanbase as an inspirational sight, however, under the Wildlife Protection Act, 1972, it’s illegal to keep a peacock as a pet. Apart from being the national bird of India, the peacock is also a protected bird in India. Peacock pheasant and peafowls are protected under Schedule 1, Part III, 10(c) and 11 of the Wildlife Protection Act, 1972, respectively.

Is the prime minister’s residence out of the purview of the judiciary, which is these days starting a lot of cases on a suo motu basis? Or is Modi allowed to pet animals, including the protected and exotic ones, under any special provisions of the law. The government has not issued any clarification so far.

Modi’s video has got 1.5m views on micro-blogging site Twitter and was retweeted 40,100 times until writing this article. On Facebook, it had 526,000 likes, 28,000 comments and 68,000 shares. While on YouTube, the video showing Modi feeding a peacock got a total of 1.86m views and 193,000 likes. This massive reach and circulation of the video will promote the idea that a peacock can be kept as a pet. In case an over-enthusiastic fan tries to imitate Modi’s image, then it would trigger chaos, as according to the Wildlife Protection Act, such an action can lead to imprisonment.

At the time of a severe national economic crisis, when large number of people are laid off work every week, it’s tragic to see Modi feeding a peacock with utmost care but not worried a bit about his government’s actions that are selling India’s land, labour and resources to big foreign corporations. As India’s sovereignty gets breached, how Modi’s fancy video with dancing peacock will solve the crisis? Quite expectedly, the video of Modi feeding a peacock stirred a Twitter storm, but that didn’t help the poor at the receiving end of the crisis at all.

While Modi takes pride in connecting with his social-media follower base and share the glimpses of his life, showcasing an illegal act is not only setting dangerous precedence and luring people to violate the law, but it’s also unbecoming of the Prime Minister’s Office. Then, when did Modi care a lemon about constitutional responsibilities and creating according optics? The video of Modi feeding a peacock at his residence, therefore, doesn’t mark any departure from the usual course he has followed all these years but is quite quintessential of his narcissistic politics.