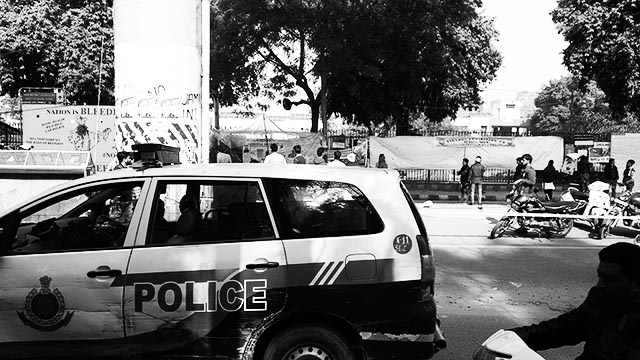 The Delhi Police has been incessantly exhibiting servility towards Prime Minister Narendra Modi’s Hindutva fascist regime and his Bharatiya Janata Party (BJP) since 2014. To score brownies and to keep its own Islamophobic ranks and files titillated, the Delhi Police is furthering the BJP’s nefarious agenda with sheer impunity and helping it to suppress popular dissent. The recently-filed supplementary charge sheet in the “Delhi riots” case––which was a state-sponsored anti-Muslim pogrom––proves beyond a doubt how the Delhi Police has become Modi’s loyal stormtrooper.

The Delhi Police’s supplementary charge sheet in the “Delhi riots” case has named Communist Party of India (Marxist) [CPI(M)] General Secretary Sitaram Yechury, Swaraj Abhiyan leader Yogendra Yadav, renowned economist Jayati Ghosh, Delhi University professor Apoorvanand and independent film-maker Rahul Roy as co-conspirators in the case. They are accused of instigating the masses to carry out violent rioting and vandalism. The Delhi Police is citing some flimsy confession statement by one of the accused as evidence to chase these people.

While these charges stirred a nationwide uproar, the Delhi Police’s Special Cell arrested former Jawaharlal Nehru University (JNU) student and activist Umar Khalid after questioning him for his alleged role in the “Delhi riots”. Khalid has been slapped with the stringent Unlawful Activities (Prevention) Act (UAPA) and is thrown behind the bars. Khalid’s United Against Hate has been opposing the Modi regime’s policies and has been scorn in the eyes of the BJP and the Delhi Police.

The anti-Muslim pogrom took place from February 24th to February 27th 2020 in northeastern parts of Delhi, when American President Donald Trump was on a state visit to the capital city. A mob was incited with virile Islamophobic rhetoric of Kapil Mishra, a notorious BJP leader, who earlier called upon the party supporters to shoot the Muslims by calling them “traitors”. The slogan became a rallying war cry for Hindutva fascism-incensed mobsters on the payroll of the BJP and its parental body–the Rashtriya Swayamsevak Sangh (RSS).

The Delhi Police, despite receiving a lot of complaints against Mishra, the Union minister of state Anurag Thakur and the BJP’s member of the Parliament from Delhi, Parvesh Verma, for raising violent slogans and inciting violence against the Muslims, didn’t even show any sort of concern. No cases were ever filed against these men who operate with sheer impunity, thanks to the patronage of the Modi regime.

But under the direction of the RSS and Modi’s Home Minister Amit Shah, the Delhi Police brutally tortured the Jamia Millia Islamia students protesting against the new citizenship matrix and opposing the National Register of Indian Citizens (NRC) mandated by the Citizenship (Amendment) Act, 2003 (CAA 2003) and the National Population Register (NPR), its precursor. The Delhi Police didn’t only attack the protesters on the streets of Delhi from December 15th 2019 onwards, it also committed macabre atrocities by attacking even students studying inside the University’s library.

The Delhi Police attacked protesters against the CAA 2019 and the NRC on December 19th in Darya Ganj area. It allowed goons to fire at Shaheen Bagh protesters and allowed the accused to go scot-free later. To top the list, the Delhi Police exhibited proper “social distancing” norms when a Hindutva fascist thug came to Jamia Millia Islamia University and shot a Kashmiri student during a rally on January 30th 2020.

The photograph of the incident, which shows a violent RSS goon training a country-made pistol at a courageous unarmed Kashmiri student walking towards him and policemen casually approaching the gunman maintaining “social distancing” much before the COVID-19 pandemic hit the city, is a stark reminder of how the RSS-controlled Delhi Police operates and why neither the Muslims nor the political opponents of the Modi regime can expect it to do anything right.

When Mishra threatened anti-CAA 2019 protesters in northeast Delhi with dire consequences and told the Delhi Police’s district superintendent, a fellow upper-caste Hindu, that the BJP men will take over the streets forcefully to evict the Muslim demonstrators, mostly women, the Delhi Police could only remain a mute spectator. After the anti-Muslim pogrom began, the RSS men were encouraged by the Delhi Police personnel to kill the Muslims. The Hindutva fascist thugs were provided cover by the Delhi Police. The Delhi Police beat to death a Muslim man after forcing him and a lot of other injured youth to sing the national anthem. Policemen were found destroying CCTV cameras to ensure no footage of their rampage survives.

It didn’t take much time for the Delhi Police to trace and arrest Shahrukh, a Muslim youth who went out with a country-made pistol to fight with the RSS goons in order to save women protesters from their onslaught. The mainstream press joined the chorus to vilify Shahrukh and tag him as a “terrorist”. The Delhi Police also didn’t take much time to arrest former Aam Aadmi Party’s Councillor Tahir Hussain, who provided shelter to his neighbours fleeing the pogrom and whose terrace was used by the local youth to resist the attack by the Hindutva fascists. Hussain is also labelled as a “mastermind” and “architect” of the violent mayhem in which most of the victims were Muslims.

No wonder, after nabbing so many Muslims and opponents of the Modi regime, the RSS’s Hindutva fascist ideology and the BJP’s divisive politics over false charges of rioting in one of the most grotesque anti-Muslim pogroms of the country, the Delhi Police’s supplementary charge sheet in the “Delhi riots” case will name only those who are no way associated with the BJP. From naming Yechury, Yadav, Ghosh, Apoorvanand and Roy, and arresting Khalid and other activists under the stringent UAPA, the Modi regime will try to distract the people’s attention from a faltering economy, a seriously unmanageable COVID-19 pandemic and the total sell-out of all public assets and national resources to the BJP’s corporate sponsors.

The likes of Mishra, Verma, Thakur and their ilk won’t be named in any charge sheet or supplementary charge sheet in the “Delhi riots” case but remain scot-free and even enjoy high security funded by the public exchequer. Rather, people like Mishra, driven by sheer hubris, will demand the hanging of Khalid and Hussain. This mockery of justice continues in India under the fascist regime, unapologetically.

It’s the marginalised Muslims and even the most pacifist opponents of the Modi regime, including the CPI(M) stalwart, who will be targeted and vilified by the Modi regime in connivance with the Delhi Police and its toady press. The sheer Islamophobic ranting will help the regime cover up its failures and hoodwink the people. This is the sole purpose of the main charge sheet or supplementary charge sheet in the “Delhi riots” case. It’s imperative to protest these arrests and build up strong mass movements to oppose and resist the Delhi Police’s unapologetic Hindutva appeasement. Else, it won’t leave any freethinking mind “unimprisoned”.