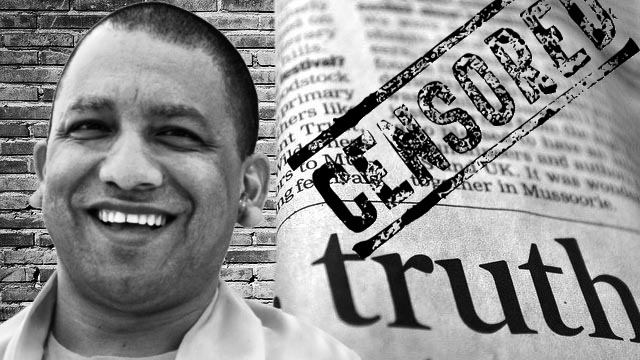 Uttar Pradesh Chief Minister Yogi Adityanath continues to face massive upheaval over the Dalit teenager Manisha Valmiki’s macabre gangrape and murder by four men from the upper-caste, dominant feudal land-owning, Thakur community. The political demonstrations by different sections of the Opposition, including the political theatrics by the Congress party’s Rahul Gandhi and Priyanka Gandhi Vadra, caused ignominious situation for the ruling Bharatiya Janata Party (BJP) as it tries hard to defend the accused, who belong to the very caste-class bloc that forms the core of its socio-political support base, amid the kerfuffle. In order to manage the crisis, the BJP has hired a Mumbai-based public relations (PR) firm named Concept PR to do media management and spin the narrative of the gruesome rape and murder.

In a report published by The Wire, it’s shown that an ungrammatical clarification note was circulated by Concept PR to journalists that claimed forensic reports have allegedly proved that the Hathras gangrape victim wasn’t raped. The note also says that the Special Investigation Team (SIT), formed by the Yogi regime to investigate the case, will “unveil evil design behind the whole incident”. This indicates that the SIT will not investigate the crime, but what Concept PR said, “the conspiracy to push the state into caste turmoil” to establish the BJP’s narrative. Even though the Central Bureau of Investigation (CBI) is roped in by Yogi in the case, the recent acquittal of 32 accused in the Babri Masjid demolition case by a CBI court proves beyond doubt that these gangrape accused will also get a clean chit from the agency.

Hiring Concept PR has raised eyebrows of the handful of free press outlets operating in India. Why would the Yogi regime hire a PR firm to do media handling in a crucial law and order crisis? Why wouldn’t the senior bureaucrats and police officials liaise with the press, which has been the norm? This move of hiring a PR agency to handle a massive political crisis is a new trend. Apart from hiring Concept PR to carry out its narrative of denial, the BJP is also organising massive demonstrations in favour of the upper-caste accused and demanding an end to the political opposition over caste atrocities.

Saving the feudal Thakurs is the immediate mission of the BJP right now. It seems that Yogi, who himself is a Thakur, will not allow the community to suffer any ignominy caused by Dalit unrest. Thus, accusing the Opposition of running a smear campaign, the BJP’s omnipotent communication blitzkrieg is peddling the conspiracy theory about innocent Thakurs suffering due to “conspiracy” of “caste turmoil” hatched by the Opposition. These attempts remind India the notorious activities––including a rally with the national flag––by the BJP to safeguard the culprits who gangraped and killed eight-year-old Asifa Bano in Jammu’s Kathua.

While the Uttar Pradesh Police peddled the “no rape” happened story, citing the “forensic report”, soon after forcefully burning the victim’s body against her family’s wishes, the BJP has been trying to seize the moment to consolidate not only the Thakurs but other upper-caste Hindus as well, especially the feudal classes, the urban elites and middle-class. There has been a lot of grudges among the Brahmins of Uttar Pradesh who have seen their power eroding due to Yogi’s unapologetic Thakur appeasement, and it drifted a section of the community against the BJP and the fissures widened after the staged killing of Vikas Dubey, a gangster accused of killing policemen. Capitalising on their common hatred against the ostracised Dalits, the BJP is now trying to woo and bind the Brahmins and Thakurs together in these tough times.

Can Concept PR, which has in its kitty the achievement of saving a Mumbai-based builder, Wadhwa Group, from the press when a security guard was killed in one of its residential complexes after a water pipe fell on him, save the Uttar Pradesh Government from the political crisis caused by the Hathras gangrape and murder? The PR industry is obnoxious for being a docile tool of capitalism and fascism in whitewashing crimes and shaping opinions to farther nefarious agendas of big corporate houses and fascist outfits. It’s unlikely that Concept PR will fail. When it comes to PR and press management, the BJP’s record is unmatchable. With its financial prowess, the BJP will survive the Hathras gangrape storm and consolidate its upper-caste vote bank by peddling conspiracy theories. Only justice will remain elusive for the victim’s family in this crooked system.