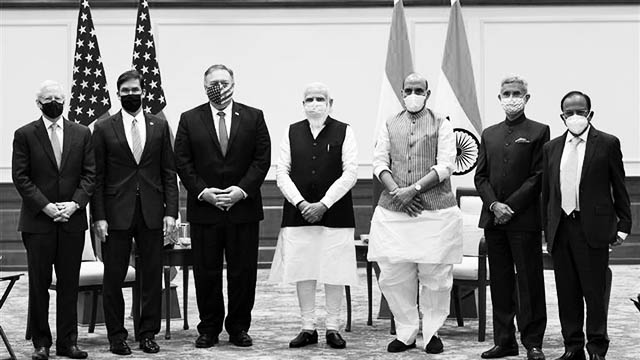 To strengthen their military tie against China, the US and India signed a strategic satellite data-sharing pact after the third Indo-US “2+2 ministerial” meet during the visit of the US Secretary of State Mike Pompeo and Secretary of Defense Mark T Esper. The duo met India’s External Affairs Minister S Jaishankar and Defence Minister Rajnath Singh at New Delhi and signed the Basic Exchange and Cooperation Agreement (BECA). The India-USA BECA is the fourth in the series of agreements between Washington DC and its semi-colony New Delhi and allows the latter access to classified satellite data of the US military.

The India-USA BECA will help New Delhi in its military endeavours against China at the behest of White House. For Washington DC, which is keen to isolate and militarily weaken China to balkanise it, India has become a crucial pawn. Earlier, India had signed agreements like the General Security of Military Information Agreement (GSOMIA)in 2002, Logistics Exchange Memorandum of Agreement (LEMOA) in 2016 and the Communications Compatibility and Security Agreement (COMCASA) in 2018 with the US.

Each of these agreements, especially the LEMOA, turned India into a military outpost of the US in South Asia. Due to this, India used its clout to coerce the smaller neighbours to grant its expansionist comprador capitalists greater access to their markets and resources. India has been using the US-India strategic partnership, after Washington DC designated it as a “Major Defence Partner” in 2016, to establish its hegemony in the Indian Ocean region. Even after such muscle-flexing, India is facing stiff competition from the regional superpower China, especially in Sri Lanka and Maldives.

Now, with the help of the India-USA BECA, New Delhi will try to gain technical upper-hand in the power tussle with China. The presence of American classified satellite data will provide the Indian Army with leverage in understanding the Chinese deployment across the Line of Actual Control (LAC). India and China have been entangled in a border standoff at the LAC in eastern Ladakh, where 20 Indian Army soldiers were killed in a fistfight with Chinese People’s Liberation Army (PLA) soldiers.

The Indian media and Prime Minister Narendra Modi’s Hindutva fascist regime, led by his Bharatiya Janata Party (BJP), have been stoking Sinophobia in the country to build up a mass opinion to wage a war against China. Recent statements by Swatantra Dev Singh, the Uttar Pradesh chief of the BJP, and Ajit Doval, the National Security Advisor, prove that the Modi regime is planning a war to distract the people’s attention from the abysmal economic crisis and the government’s failure in containing the COVID-19 pandemic, even after the most inhumane lockdown. This is a reason that despite a positive meeting between the Indian and the Chinese side in Moscow, there has been no progress in de-escalation.

Pompeo is entrusted by US President Donald Trump to provoke a war against China during the crucial Presidential Poll, in which Sinophobia is the only weapon for the incumbent to pulverise his closest rival Joe Biden, another warmonger. This is the reason Pompeo was vocal at the meeting of “the Quad”––an America-sponsored anti-China military entente––held at Tokyo, calling for an all-out attack against the Chinese people.

It was after the Quad meeting that the Chinese nationals living in Australia were forced to denounce the Communist Party of China (CPC) by the McCarthyist Australian government. India decided to up the ante as well. It has been imposing barriers on trade with China, while at the same time using the xenophobia prevalent in India to gag journalists doing a critical analysis of India-China relations.

Pompeo didn’t mince words while criticising the CPC during the “2+2” ministerial meet. “I am glad to say the United States and India are taking steps for cooperation against all manners of threats and not just those posed by the Chinese Communist Party,” he said during the meet. Pompeo also said, “Our leaders and our citizens see with increasing clarity CCP is no friend to democracy, the rule of law, transparency, the freedom of navigation [which is] the foundation of a free and prosperous Indo-Pacific.”

This is a first of its type of jibe against the ruling Party of the neighbouring country from India’s soil. Pompeo’s hubris exemplified the servility shown by the Modi regime to appease Trump. Modi and his cabal, as well as the mainstream opposition in India, which is closely tied with Washington DC, believe that the US foreign policy regarding India will remain unchanged even if the white-supremacist loses the election.

In this context, China has been warning Pompeo about the repercussions of his provocations. In a statement, Chinese Foreign Ministry spokesperson, Wang Wenbin said: “These are groundless accusations which reflect that he is clinging to the Cold War mentality and ideological biases. We urge him to abandon the Cold War and the zero-sum game mentality and stop sowing discord between China and regional countries as well as undermining the regional peace and stability.”

While the LEMOA helped the US imperialism in using India as a military base for repair and refuelling during a war with Iran, the India-USA BECA will help it in providing force deployment information to New Delhi, which will help India to station troops in different locations around the LAC, forcing Beijing to station a large number of troops to counter it, bringing a significant force in the western theatre, leaving its eastern theatre vulnerable. In case the US can trigger a conflict with the Democratic People’s Republic of Korea (DPRK) then it can manage to use it to start a war against China at that end. Moreover, Japan and Australia can join the war against DPRK and turn their guns against China, as Beijing will be forced to intervene in case of aggression.

Such a probability exists and will be catastrophic for the entire region. Something Wang and the Chinese have warned repeatedly. But the US has no penchant for peace. It never had. Using the Indian poor as cannon fodder for Washington DC, the Modi regime and the BJP will earn its brownies from White House and Wall Street. Multi-billion dollar weapon deals will enrich American military-industrial complex as India’s other major weapon supplier Russia won’t support India, unlike 1962, in the event of a war with China.

As the US corporations will grow richer, Indians will have a heavy burden of foreign debts imposed on their shoulders. This at a time when the country has a record unemployment issue, a drastic fall in general industrial output and spiralling inflation. Neither Pompeo nor Trump will help in resolving the crisis of poverty, unemployment or inflation, as these crisis scenarios will help them profiteer. Therefore, at the end of the day, the Indian people will pay the price of a war that they neither deserve nor benefit from.

To prevent such a catastrophe and to free India from the domination of the US imperialism, it’s imperative to build up people’s movements against these neo-colonial designs of Washington DC and the complicity of the Modi regime, the BJP and all mainstream opposition in this. It’s therefore important to oppose all such anti-people pacts and deals in which the ruling classes have tied-up India to appease their imperialist bosses in the US and the west. Therefore, for the interest of the Indian people, it’s necessary to oppose the neo-colonial deals like India-USA BECA, LEMOA, etc. Unless these pacts are scrapped, the threat of a major war will loom large on India and the neighbourhood.