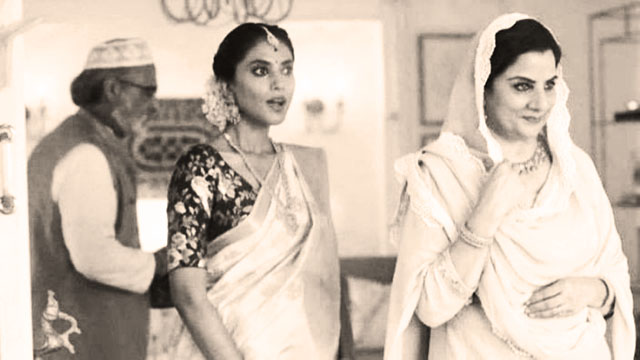 The recent outrage of the Hindutva fascists over an advertisement by the Tata & Sons’ jewellery division Tanishq, depicting a Hindu woman married to a Muslim man, sparked a lot of controversies and forced the company to withdraw the advertisement. The rabid and feral social media warriors of the Rashtriya Swayamsevak Sangh (RSS) launched a virulent attack against Tanishq, accusing it of hurting Hindu sentiments, which the advertisement clearly didn’t. The Tanishq advertisement controversy made many liberals jump into the fray to defend the company.

This Tanishq advertisement controversy actually highlighted the deep fissures in the Indian society that the RSS-led Hindutva fascist ecosystem has mainstreamed through its virulence and bush telegraphs, especially using the leitmotif of “love jihad” that’s used now to demonise the Muslim community. It also highlighted the vacillation of the so-called Indian liberal democrats, who can’t stop fooling the people.

Tata Group has been one of the biggest funders of the ruling Bharatiya Janata Party (BJP)—the parliamentary wing of the RSS—and a diehard supporter of Prime Minister Narendra Modi. Ratan Tata, the septuagenarian patriarch of the biggest and oldest comprador capitalist conglomerate of India,  has been supporting Modi since his controversial and blood-laced tenure as Gujarat’s chief minister. Mr Tata was the first of the big capitalists, apart from the RSS’s big funders like Reliance Industries Ltd of Mukesh Ambani and Adani Enterprises of Gautam Adani, to hail Modi at a time when he was facing worldwide condemnation for his role in the 2002 Gujarat pogrom.

After being a Congress patron for years, Mr Tata’s official switching to the RSS and BJP helped the ruling dispensation immensely. According to data released by the BJP, out of the Rs 4.73 billion it received from different corporates in 2018-19, the Tata Group’s Progressive Electoral Trust contributed 75% of the amount. Mr Tata also paid a visit to the RSS headquarters in Nagpur and hailed the largest and organised armed fascist organisation in the world. The inflow of money to the RSS and the BJP from the Tata conglomerate happened due to its need to expand and push forward stalled projects in states like Chhattisgarh and Odisha.

Despite the Tanishq advertisement controversy, one must remember that the Tata Group’s support to the BJP in its endeavour to sweep the last Lok Sabha election shows that it cares a lemon about the constitution and the values of inclusiveness and secularism. As a hardcore comprador agency, the Tatas are solely dependent on foreign trade and support of the Indian government, at all levels, to crush people’s resistance against its aggression on the land and forests.

The Tanishq advertisement controversy can’t cleanse the Tata’s monstrous role in the Kalinganagar massacre of 2006, which killed 13 tribals in the Jajpur district of Odisha, who were opposing the conglomeration’s aggression on their land. Similarly, the Tata group has been complicit in forceful eviction of tribals throughout its history, from the time the group’s founder, Jamshed Tata, founded his factory in modern Jharkhand. The eponymous steel city became the first attempt by the Tatas to create settler colonies in the occupied territory of the tribal people.

While it grew as a pro-British colonial business house since inception, the Indian ruling classes and their servile intellectuals have always portrayed the conglomeration as a “nationalist” and even as a pride of India. After funding the BJP and the RSS, Mr Tata’s conglomeration won the contract to construct Modi’s ambitious Central Vista project in the capital New Delhi. The project worth Rs 200 billion, which is Modi’s version of Adolf Hitler’s Germania project, with a new Parliament building— an Indian version of Volkshalle—is a cruel mockery of the poverty and hunger of millions, whose number has increased significantly since the COVID-19 pandemic’s outbreak.

Today, if the RSS’s bandwagon is viciously attacking the Tata Group due to the Tanishq advertisement controversy, then one must consider it as internal strife between two sections of the ruling classes. While the Tata Group, which has a significant presence globally, needs to project an inclusive image to the world, for the sake of its brand image, it can’t also anger the Hindutva camp, which it has been rearing in the backyard. Moreover, as the antagonism between the poor and the rich will intensify in the days to come, the need for communal vitriol and divisive politics will increase manifold. The Tatas know this fact. They can’t make the RSS or the BJP unhappy as their services are essential for the existence of comprador capitalism’s loot and plunder of resources and labour.

Therefore, for the sake of the collective need of India’s comprador capitalists, their foreign monopoly-finance capitalist masters and their feudal allies, Tata is bound to capitulate and shed its shell of “inclusivity”. Thus, the much-hyped Tanishq advertisement controversy was bound to end with the Tata Group supporting the Hindutva fascism. Any form of encomium by the liberals to glorify the Tatas as secular or “inclusive” will be a sheer act of deception designed to hoodwink the masses and present to them their oppressor Tatas, the funders of Hindutva fascism, as a saviour and victim. The progressive and anti-fascist forces must make the people aware of this to thwart such obnoxious agenda.