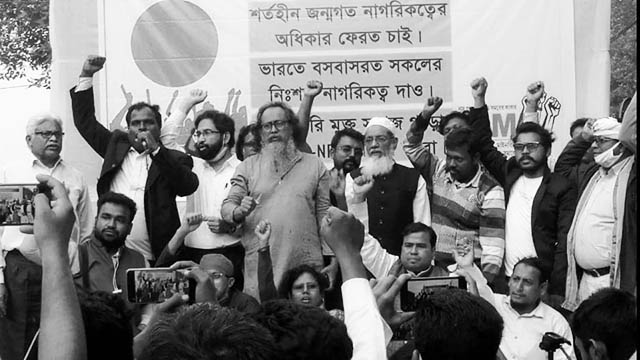 DAMAL’s December 9th rally demanded that each Indian’s citizenship, irrespective of their caste, class, community, must be unconditionally secured through a new, humane citizenship amendment; the unconditional return of the right to citizenship by birth that the Citizenship (Amendment) Act, 1987 (CAA 1987) and the Citizenship (Amendment) Act, 2003 (CAA 2003), snatched away; and DAMAL demanded the scrapping of the Aadhar-based biometric identity system, which is the exercise to prepare a National Population Register (NPR). The NPR is the prelude to the NRC.

Despite vehement opposition from other “anti-NRC” platforms of West Bengal, DAMAL’s December 9th rally successfully brought the members of different communities together on its stage, which is a big blow to Modi’s communal polarisation agenda in West Bengal. DAMAL, formed by writer and social activist Manik Fakir (Mondal), political and social activist Imtiaz Ahmed Mollah, along with other political and social justice activists, suffered a lot of setbacks in organising the rally, as the other platforms, led by prominent intellectuals and upper-caste Bhadralok community, who call the NRC issue a “communal” issue to shoo away the non-Muslims—especially Namasudras, Matua community, Dalits and tribal people—from the movement, spread a rumour through their well-oiled network that the rally has been “called off”.

According to DAMAL leader Mollah, the rumour spread like a wildfire in parts of North and South 24 Paraganas and nearby districts of Kolkata from where thousands of Matua, Namasudra and Muslims were to come to the venue. Mollah accused agents of Modi’s Bharatiya Janata Party (BJP) of the bush telegraph campaign against DAMAL and during a live programme on Facebook, the same night, hailed the initiative as a unique one that for the first time brought the communities that the BJP has been trying to separate and pit against each other.

Since its formation, the DAMAL leadership has been focusing on building a united front of Dalits, Namasudras, Matuas, tribal people and Muslims to fight back the NRC menace in West Bengal, which its opponent groups—influenced by opportunists and NGOs—are vehemently opposing. Therefore, during DAMAL’s December 9th rally, the representatives of Dalit communities, the politically-crucial Matua community, the tribal communities and those from the Muslim community came together on the same platform and declared their intention to jointly fight and defeat the Hindutva fascist juggernaut of the Modi regime and its NRC exercise. This became a milestone in the history of the anti-NRC movement of West Bengal.

The optics of such unity has caused ignominy to the BJP, which has targeted the Matua community, other Namasudra communities and the tribal masses as its support base in West Bengal to sweep the 2021 election. Dangling the contentious Citizenship (Amendment) Act, 2019 (CAA 2019), which has a provision to allow only 33,313 refugees from Afghanistan, Bangladesh and Pakistan to apply for citizenship, as bait before the Matua community, the BJP has been cajoling them to vote since years. At this point, DAMAL’s December 9th rally caused immense damage to the BJP’s endeavours as it brought together the Muslims and Matuas, whom the Hindutva fascist camp is pitting against each other.

The discontent among the Matua community has been visible over the BJP’s dilly-dallying over the question of granting them citizenship. This became a huge issue when the BJP’s member of Parliament (MP) Shantanu Thakur, a Matua himself and a descendant of the sect’s founders Hari Chand Thakur and Guru Chand Thakur, expressed his discontent over the delay in providing citizenship. While in one of the videos earlier circulated on the social media, Thakur was seen telling his followers that the CAA 2019 is a hoax and the BJP won’t give citizenship to anyone, after Home Minister Amit Shah’s damage control visit to West Bengal and some PR optics creation, the MP said it’s the Supreme Court that’s not allowing the implementation of the CAA 2019 and that the law will provide the Matuas with an opportunity to be a citizen.

However, the Union government’s records show that it has blamed the COVID-19 pandemic as a reason for not publicising the Rules of CAA 2019. The Supreme Court has issued no stay order to prevent the implementation of the law. DAMAL has been claiming that the BJP either won’t publicise the Rules, ie, the executive’s handbook to implement the law, before the West Bengal Assembly election 2021 or it will publicise Rules that contradict the law and will be subject to a stay from the Supreme Court, which will provide the BJP with an opportunity to blame the opposition for the Matua community’s plight. Kailash Vijayvargiya, a notorious BJP leader, has been deployed to misguide the Matua community on the issue and Thakur himself is caught in a precarious position due to the BJP’s dirty game over citizenship for the victims of partition.

DAMAL used the contradiction within the BJP and the discontent within the Matuas to push forward the demand for a new, humane citizenship law, which would sensibly deal with the issue. DAMAL became the convergence point for the oppressed and frightened Dalits, the Matua community, the tribal and minority communities. DAMAL’s demand for a new, humane CAA resonated well with all communities that the BJP has been dividing and it’s threatening to stall the juggernaut of Hindutva fascism in West Bengal by demolishing its polarised support base. But the other anti-NRC crusaders, driven by elite intellectuals, slammed the move without any logic.

According to the leaders of the various communities who took part in DAMAL’s December 9th rally at Kolkata, the demand for unconditional citizenship can be met only through a comprehensive and humane amendment to the law by repealing the previous amendments done in 1986, 2003 and 2019. The unique equation, if can be replicated at each level of the state’s polity, especially at the grassroots, will be a shocker for the BJP in the 2021 election. In that case, DAMAL will be able to cripple the juggernaut of Modi and his brand of Hindutva from seizing West Bengal before turning India into a theocratic fascist state officially.

Whether the DAMAL leadership can carry forward the movement despite incessant attacks from the BJP and its social media-based appendages like the Anti-NRC People’s Movement, Joint Forum Against NRC, etc, who are trying to vilify the demands raised by the organisation by resorting personal slanders and malicious propaganda, is to be seen. However, DAMAL’s December 9th rally at Kolkata completed a major task that wasn’t ever implemented in the country—the unity of the oppressed and marginalised people across religious and caste lines—a real threat to the existence of the BJP.