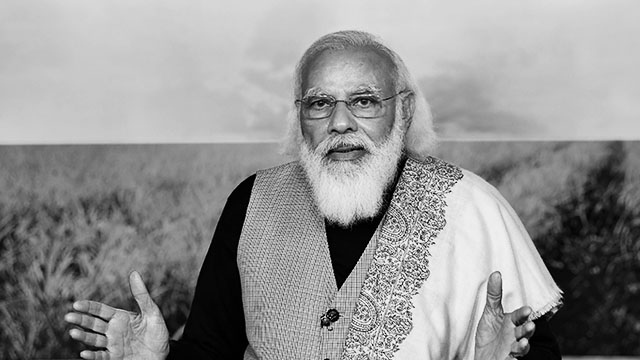 Finally, Prime Minister Narendra Modi has woken up to the farmers’ movement against pro-corporate agriculture laws passed by his government. After dilly-dallying for a month, Modi interacted with farmers to allay their fears regarding contract farming soon after disbursing Rs 180 billion as an instalment of PM-KISAN scheme to 90m small and marginal farmers. Modi’s interaction with the farmers and his rhetoric, bashing the Opposition, caught media limelight, but for strange reasons.

Modi’s interaction with the farmers didn’t, ironically, have any representative of the agitating farmers or those who are obstinately opposing his obnoxious farm reforms that aim to help his big corporate fundraisers, like Mukesh Ambani of Reliance Industries Limited (RIL) and Gautam Adani of Adani Enterprise. Rather, there were handpicked farmers from seven states who praised the new laws and parroted the government’s line. Undoubtedly Modi’s interaction with the farmers looked extremely scripted and did little to convince the people and protesters.

Using these seven, Gagan Parin from Arunachal Pradesh, Hari Singh Bishnoi from Fatehabad, Haryana, Manoj Patekar from Dhar, Madhya Pradesh, Rajan Bhosle from Latur, Maharashtra, Naveen Thakur from Naupada, Odisha, M Subramani from Krishnagiri, Tamil Nadu and Ram Gulab from Maharajganj, Uttar Pradesh, as epitomes of happy farmers, praising corporate overlordship on agriculture, Modi asserted that real farmers are happy and only the “misled” farmers and those who have “political” motives, are opposing his initiatives. Through this, he blamed millions—118m farmers and 144.3m farm labourers, as per the Census 2011 findings—of being susceptible to be “misled”.

Despite the tall claims, Modi’s ruling Bharatiya Janata Party (BJP) and its parent body Rashtriya Swayamsevak Sangh (RSS) could bring only a few farmers to praise the government. The BJP and the RSS brought seven farmers when according to All-India Kisan Sangharsh Coordination Committee (AIKSCC) leader Avik Saha, millions of farmers are opposing the farm reforms in 200 districts, ie, one-third of India is protesting Modi’s farm reforms and demanding legal guarantee for minimum support price (MSP) for their crops. To cover up the ignominy of the poor optics, Modi’s interaction with the farmers was laced with incessant salvo fired against the farmers’ movement.

Whether these farmers, who participated in the virtual conversation with the prime minister, were telling the truth is irrelevant, as the prime minister has been asking the wrong questions to manipulate facts. For example, Modi asked the farmers whether the corporates have seized their land, which isn’t possible under the current system but there is nothing that will stop the farmers from distress selling of their lands due to financial crisis that will befall upon them in the years to come. With each testimony by these farmers, the hollowness of Modi’s claims was exposed but the BJP and the RSS projected them as rebuttals to the Opposition’s “politicisation” of the issue.

Though the contentious farm reform laws—The Farmers’ Produce Trade and Commerce (Promotion and Facilitation) Act, 2020 and The Farmers (Empowerment and Protection) Agreement of Price Assurance and Farm Services Act, 2020, along with the amendment to the Essential Commodities Act, 1955—doesn’t allow the corporate houses to annex the land of the farmers directly if they fail to deliver as per agreed-upon standards, they can drive farmers to destitution and affect the common people through spiralling food inflation. The “middle man” who is vilified by the Modi regime, the BJP-RSS and their stooges, is provided with a legal designation in the new laws. Moreover, the farmers are barred from seeking justice by keeping these laws out of the purview of the courts. In a nutshell, these laws act against the farmers and serve the corporate houses.

Indeed, the Modi regime isn’t doing away with the MSP. But it’s a half-truth. Firstly, the Modi regime’s MSP isn’t as per the Swaminathan Commission’s Report. It’s far less than the advised level and it’s only by riding on the shoulders of the corporates that the Modi regime is selling the dream of “doubling the farmers’ income” by 2022. Secondly, despite the prevalence of the MSP, most farmers in India can’t avail it. Rather than strengthening the state’s role in purchasing crops from the farmers and distributing food at a subsidised rate through the public distribution system (PDS), the Modi regime has been eulogising the corporates and demolishing the last vestiges of the welfare state.

The farmers aren’t compelled to participate in a corporate-controlled contract farming model under the new law. They aren’t prevented from selling their crops to the agricultural produce market committee (APMC) yards at all. Still, these farmers will be affected as when the corporate houses, to wipe out competition and destroy the APMC yards, offer higher prices for the crops, these farmers will gulp the bait due to their economic condition and sell to such companies, especially the RIL’s retail outlet Reliance Retail Venture Limited and Adani’s agro-business. This will eventually make the APMC yards defunct and only the big corporates will have absolute control over agricultural produce.

In such a situation, devoid of logics to defend an anti-farmer law, the Modi regime has been calling the farmers for a “logical” solution to their demands. Throughout Modi’s interaction with the farmers, the prime minister trained guns at the Opposition, especially West Bengal Chief Minister Mamata Bandopadhay and Kerala Chief Minister Pinarayi Vijayan. Modi’s desperation proved that he is in a quagmire. On a mission to destroy the PDS, the APMC yards, and end the MSP to turn farmers into corporate serfs, Modi can’t backtrack on the farm laws and he can’t even move a step ahead if the farmers’ protests continue.

In such a situation, when, driven by a sheer existential crisis, Modi fires a salvo against his political foes and resorts to blatant lie mongering, it’s well understood that his regime’s juggernaut is facing the toughest challenge in its nearly seven-year-long rule. Modi’s interaction with the farmers was a frantic attempt to hoodwink the masses, but the RSS-BJP’s such ridiculous and banal attempts won’t fool the common farmers anymore. Thus, they refuted Modi’s blames and renewed their campaigns against his pro-corporate theocratic dictatorship.