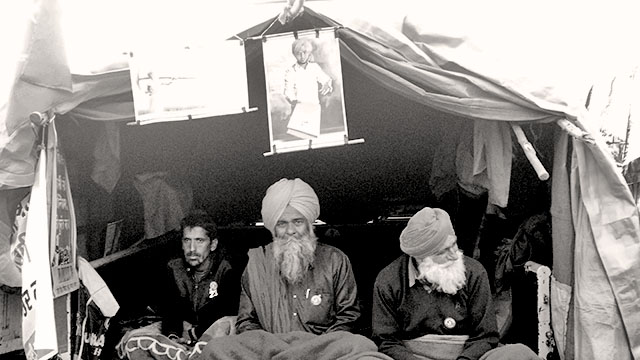 As mostly Haryana, Punjab, Rajasthan and Uttar Pradesh farmers protest against Prime Minister Narendra Modi’s contentious farm laws at seven of Delhi’s borders including Tikri, Ghazipur and Singhu Border, the ruling Bharatiya Janata Party (BJP) and its parental body Rashtriya Swayamsevak Sangh (RSS)—using a plethora of toady media outlets—have been alleging that the movement isn’t a pan-Indian one, but only of a tiny section of north Indian farmers. Allegations like the movement being sponsored by “middle-men”, Pakistan, Khalistani separatists and supported by Maoists, were also levelled since the beginning. But despite such allegations and vilification, the Modi regime failed to defeat the farmers.

Earlier, in this article, the author has shown why only the north Indian farmers protest the contentious farm laws enacted by the Modi regime. The farmers of West Bengal face severe challenges when they try to sell their paddy at government procurement centres. When the point was raised during an interview with Surjeet Singh Phul, the Punjab state president of Bharatiya Kisan Union (Krantikari) [BKU (Krantikari)], at Delhi’s Singhu Border, he downplayed the BJP’s allegations. Phul showed that the farmers protest in certain states vehemently as they are getting the legal rights to a minimum support price (MSP) for the crops and the government’s buying system is effective, but in certain states, like West Bengal, both are missing.

Showing the movements going on throughout the country, as farmers protest Modi’s obstinate stance on the pro-corporate farm reforms, Phul said that it’s true that the movement began in Punjab, as the farmers felt the threat of corporate aggression against their land and livelihood, but very soon the farmers of Haryana also joined the movement. “It’s true that this movement started in Punjab. We are saying that it’s Punjab that took this movement to other states,” he assertively stated. The reason why Haryana and Punjab became the epicentre of the movement is that “here they (farmers) enjoy the right to MSP, the crop they cultivate, especially the paddy, is bought by the government, the farmers didn’t have to worry,” Phul said.

Phul stated that “Haryana started this movement quite late.” According to him, the closure of the toll plazas and the upheaval in Punjab didn’t impact Haryana much for the initial two months. However, when the “movement reached Delhi, Haryana and Punjab became equal in terms of number of participants, number of tractors, number of Langars…”. Phul said that “the Haryana guys played the main role in demolishing all the barricades that were raised on November 26th”. “The Haryana guys prepared themselves beforehand with their tractors, etc… The Punjab farmers had only trollies, it’s only the Haryana farmers who bought the high horsepower tractors…”, Phul informed.

He informed how major movements are building in Karnataka, Kerala, Maharashtra, Tamil Nadu and Telangana. Citing the example of Bihar, where, as the farmers protest the absence of MSP and enactment of Modi’s anti-farmer laws, the police unleashed macabre atrocities, Phul showed how the movement is reaching newer territories daily. “They were breaking the barricades, there were thousands, something around a crowd of 10,000 who faced the baton charge,” he said about Bihar’s farmers’ rally. “These all acts slowly gather up to become a spark… a spark on dry land, or dry leaves, in a dry forest can cause prairie fire. What sparked in Punjab has reached over 15-16 states and will continue to reach more states,” Phul said.

He called upon the West Bengal farmers to protest the laws— by building up local movements at district and state level. He stressed on learning from the Punjab experience, as farmers protest the draconian laws in each state. According to him, only the farmers within a radius of 400 km of Delhi can come to the capital for demonstrations, the rest must continue to exert pressure from their respective states. He said, if the Haryana and Punjab farmers protest the destruction of the MSP system and the APMC yards in north India, those in West Bengal or Tamil Nadu must demand that they also get MSP guarantee and APMC access.

The demand to protect and strengthen the APMC yards and to provide legal guarantee for MSP are crucial ones raised by the farmers. It’s not that the northern farmers protest the farm laws only, they also demand a legal guarantee for MSP. This means, if a central law is enacted to ensure purchase of all agricultural produce at an MSP, which is, as per the Swaminathan Commission’s suggestion and not as per Modi’s whims, then the farmers will have a little higher income than what they have been earning in different states.

Moreover, by keeping the corporates away from agriculture, not only the farmers aim to protect their land but also safeguard India’s food security. Phul and other farmer leaders have been pointing out this threat incessantly.

Liberalised food hoarding norms, as per the Essential Commodities (Amendment) Act, 2020, allow stocking of essential food grains to create artificial shortage and the government won’t interfere until food grain prices increase up to 50% of the last three years’ average price and 100% for fruits and vegetables. This gives a wide window to the corporates for black-marketing food. The agitating farmers protest this criminal conspiracy and have been calling upon other farmers across the country to condemn and fight this legislation. Even though the farmers protest Modi’s contentious laws throughout the country, the BJP and the RSS refuse to acknowledge the fact, and the prime minister is conveniently peddling lies on development, to protect the interests of the big corporate houses that fill the saffron club’s coffer. But this, according to the farmers agitating in Delhi’s Singhu Border, will hasten the imminent fall of the Modi regime. It’s not an impossible proposition in case the farmers’ movement spreads like a wildfire and consolidates its strength in all crucial states, leaving the BJP-RSS disarrayed and fractured. The situation in Singhu Border is promising that possibility.