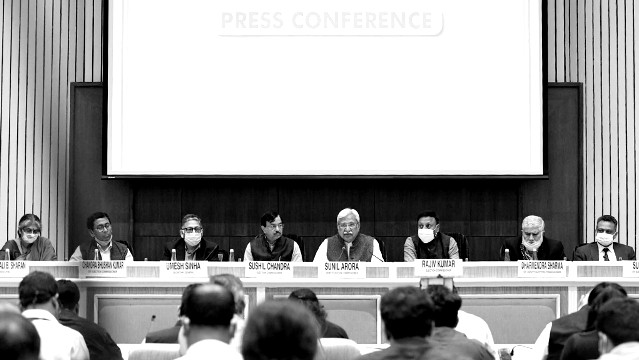 The 2021 West Bengal Assembly election dates were announced by Chief Election Commissioner (CEC) Sunil Arora, under whose reign Prime Minister Narendra Modi’s Bharatiya Janata Party (BJP) has experienced a period of boon, while the Opposition has its bane. The CEC announced that the West Bengal Assembly polls 2021 will take place in eight phases, which is unprecedented after the state had a seven-phase election during the 2019 Lok Sabha election. Moreover, the state’s legislative assembly election will take place under the guard of the Central Government’s paramilitary forces, which will eventually make the BJP’s goal of usurping power in the state by using the brute force of New Delhi a cakewalk.

While four more states and union territories—Assam, Kerala, Puducherry and Tamil Nadu—will have their respective assembly elections in 2021, the special attention to West Bengal with unique eight-phase polling raises eyebrows. Arora, whose tenure is marred in controversies, declared that the elections will take place between March 27th to April 29th while the results will be declared on May 2nd. Only 2021 West Bengal Assembly election dates, followed by the six-phase Assam Assembly elections, raised severe doubts.

Tamil Nadu, where the incumbent All-India Anna Dravida Munnetra Kazhagam (AIADMK), an ally of the BJP, is facing the Dravida Munnetra Kazhagam (DMK) and the Congress party, will have elections in 234 seats in only one phase. There, 294 seats of the West Bengal Assembly will go to the polls in eight phases. This is one of the major mockeries of the Modi-fied era of democracy. If the TMC’s rule is so dangerous for an election to be conducted in eight phases, then why the Party isn’t banned by the Union government under any of its draconian terror laws? Why single-out West Bengal?

Unsurprisingly, taking potshots at the Union government and the BJP’s lackey CEC Arora, West Bengal Chief Minister Mamata Bandopadhyay has harshly criticised this mockery of democracy and called it a move taken to appease Modi and his coterie. Arora, religiously adhering to the diktats from the BJP headquarters, used the COVID-19 pandemic as a subterfuge to peddle the theory of phased election in only one state, which is now a bird’s eye for the BJP. The TMC’s other opponents like the Congress party and the Communist Party of India (Marxist) [CPI(M)]-led Left Front have supported the BJP’s move to deploy Central paramilitary forces in West Bengal.

Under the garb of combatting the TMC’s violence, the Congress-Left Front Alliance is calling for state-sponsored violence by the BJP-ruled New Delhi’s stooges in the soil of West Bengal. It’s a sign of their secret pact with the BJP, as the latter is not treated as a principal threat by these parties. The Congress-Left Front Alliance supports the BJP tactically in different constituencies and the 2019 Lok Sabha election bears testimony of this equation. Now, when CEC Arora and the entire BJP-led Hindutva fascist universe have pounced upon West Bengal, rather than saving the dignity of the state, these two have joined the chorus.

During the last few months, due to the economic crisis, rising fuel prices, the threat of disenfranchisement hanging over the Bengali victims of partition, massive unemployment, unbridled privatisation of public sector undertakings, the farmers’ movement against the Modi regime’s pro-corporate farm reforms, and the defection of many utmost corrupt and unscrupulous TMC leaders to the BJP have hampered the latter’s electoral prospects. This is the reason that the saffron party is leaving nothing to chance and used the CEC to manipulate the 2021 West Bengal Assembly election dates. This means, if the CEC can fix dates as per the BJP’s diktats, then it can very well synchronise the poll results according to the BJP’s expectations. This is a peril for West Bengal.