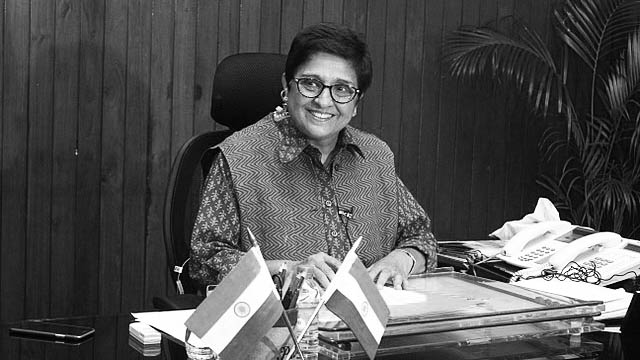 A severe political crisis in Puducherry is unfolding at present with the removal of former IPS officer Kiran Bedi from the position of lieutenant governor (LG) of the union territory. Though Puducherry Chief Minister V Narayanasamy is rejoicing the removal of Bedi from the LG’s office by President Ram Nath Kovind, the scope of survival of the ruling coalition of the Congress party and the Dravida Munnetra Kazhagam (DMK) looks bleak in the election year.

Four members of the Legislative Assembly (MLAs) belonging to the Congress party have resigned recently, allegedly due to the bait induced by Prime Minister Narendra Modi’s Bharatiya Janata Party (BJP). In the 28-member-strong Assembly, the coalition had 14 MLAs and now it has only ten, which has enthused the Opposition to demand Narayanasamy’s resignation.

The BJP is keen to sweep the union territory in the forthcoming assembly polls. It’s carefully fuelling a political crisis in Puducherry to tantalise its cadre with the bait of power. The resignation of the Congress MLAs and the new equations that may emerge before the 2021 assembly elections are used by the BJP to consolidate its position in the union territory.

Though Narayanasamy is calling Bedi’s removal as a victory of the Puducherry people, it’s unlikely that the Modi regime will reprimand Bedi—a hardcore BJP loyalist—for violating the Constitution during her contentious tenure as the LG. Bedi, who had been at loggerheads with Narayanasamy’s government due to her autocratic behaviour, is removed to ensure that the ongoing political crisis in Puducherry is utilised by a local face. That’s why President Kovind named Telangana Governor Tamilisai Soundararajan as the acting LG of Puducherry.

Soundararajan, who was a BJP stalwart of Tamil Nadu, was made a governor for a tactical purpose. Her taking up the reins from Bedi isn’t going to be happy news for Narayanasamy, whose political myopia prevents him from seeing the implications of one Hindutva agent replaced by another at a time when a political crisis in Puducherry is maturing and the elections can open gateways to massive horse-trading for the BJP.

Bedi was removed not to provide a breathing space to Narayanasamy’s ailing coalition government, but to possibly provide her with a role amid the nationwide farmers’ protest, especially in Delhi. As a young, and India’s first woman IPS officer, Bedi rose to fame by fighting with a Nihang—an armed Sikh warrior order—in November 1978. It was in the same Delhi that she lost her bid for the position of chief minister as a BJP candidate against Arvind Kejriwal in 2015.

As Punjab has played a key role in the movement, where Sikh farmers have become the face of the movement, Bedi may be a pawn for the BJP to counter them. Her anti-Sikh Punjabi Khatri image, likened by the upper-caste elites and middle-class, who eulogise her as an epitome of an “empowered woman”, will help the BJP to recover from the ignominy caused to Modi’s rule when the farmers’ tractor rally nearly occupied New Delhi on January 26th.

There is already a demand created for Bedi in Delhi. In this article published by The Economic Times, Bengaluru-based mainstream journalist Raghu Krishnan became the establishment’s advocate to suggest that Bedi be put in charge to deal with the farmers, as he capitalises on the hurt jingoistic sentiments of India’s elite and middle-class over the issue of the farmers seizing the Red Fort on the Republic Day. Bedi’s removal from the LG office at this juncture, therefore, raises eyebrows.

The BJP’s coalition with the ruling, pro-Hindutva, All-India Anna Dravida Munnetra Kazhagam (AIADMK) in Tamil Nadu will face a severe anti-incumbency wave, especially due to the DMK-Congress party alliance’s intensive campaigning against it. The chances of the AIADMK returning to power in Tamil Nadu look bleak. At the same time, the BJP won’t be able to do any remarkable performance in Kerala, despite amplifying Hindutva fascist cacophony in the state.

In such a situation, if the BJP can seize Puducherry then it will be able to save itself from humiliation in southern India. To ensure that they get the union territory later, the BJP may be fuelling the political crisis in Puducherry, either by using the LG as a pawn or by weaning away MLAs from the Congress party. However, it’s still to be seen whether placing Soundararajan and removing Bedi will pay any dividend to the BJP in Puducherry or harm its prospects in the long run.