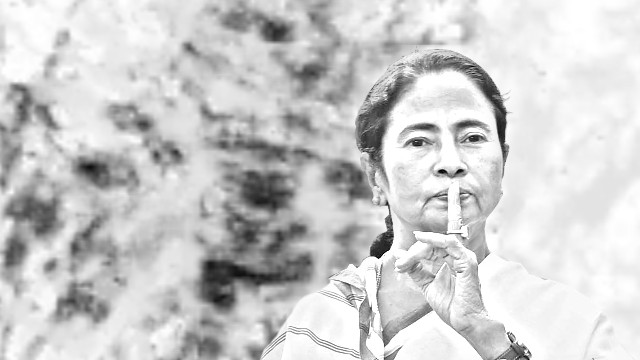 If one asks a youth in West Bengal to summarise the decade-long rule of Chief Minister Mamata Bandopadhyay’s Trinamool Congress (TMC), the answer is subtle and straightforward: it has been an era of unemployment and corruption in the government’s recruitment process. Riding high tides of anti-incumbency waves against the former left rule, Bandopadhyay ascended to power in 2011 promising to transform West Bengal with a transparent government based on the rule of law. But she failed to deliver her promises. West Bengal under the TMC has turned into the exact opposite of what Bandopadhyay promised in 2011.

In West Bengal, the Central Government’s employment opportunities are very minimal. Therefore, the youths have been dependent on state government jobs. Also due to lack of industrial development in post-colonial period, the state government jobs are of only hope for the unemployed. The aspirants from the lower and middle-class households eye on the teaching jobs. Teachers are recruited through The West Bengal School Service Commission (WBSSC), The West Bengal Madrasah Service Commission (WBMSC) and the West Bengal Board of Primary Education (WBBPE).

But during Bandopadhyay’s rule every recruiting process faced hundreds of cases due to discrepancies and the recruitments got delayed. The WBSSC, which was set up in 1997 by the then Communist Party of India (Marxist) [CPI(M)]- led Left Front government, maintained a regularity and recruited teachers in the stipulated vacancies annually before Bandopadhyay came to power in 2011. But as West Bengal under the TMC started a reverse march, the WBSSC recruitment process suffered a lot, causing agony to the unemployed youths.

Since May 2011, West Bengal under the TMC saw the WBSSC conducting only two exams, and in each of them, hundreds of discrepancies were noticed, and they faced backlash in the Calcutta High Court many times. The cancellation of the upper-primary recruitment panel by the Calcutta High Court for serious irregularities is a new feather in Bandopadhyay’s hat.

While many call Bandopadhyay “Mamata Apa”—apparently to propagate the myth that West Bengal under the TMC has been a fiefdom of “Muslim appeasement” —something that got badly hurt during her rule is the Madrasah education. West Bengal under the TMC had only one batch of recruitment in government-aided Madrasahs in 2013, for which the process completed in 2018. The job aspirants completed traveling the labyrinth from the Calcutta High Court to the Supreme Court and were finally able to join the services in 2018. More on this will come in the second part of this article.

The TMC-led government may claim as there was a case going on for which they were not able to recruit, but at the same time, the inactiveness on the part of the government was obvious. A coterie has been trying hard for the abolition of  the WBMSC, which  conducts examinations to recruit teachers on merit basis. It is trying to replace the Managing Committee as the recruiter. The control on the Managing Committee of the WBMSC will enable them to chiffon away millions from the unemployed youth by luring them with employment.

The advocate of this coterie is now going to be appointed as a member of the same WBMSC by the TMC-led West Bengal Government. This clearly indicates the government’s intention regarding Madrasah education, as the Bengal Madrasah Education Forum, which fought a legal battle to save the MSC, alleged in their Facebook post. Now there are thousands of vacancies in the government-aided Madrasahs, where the most marginalised Muslim children study. This hollows out Mamta Banerjee’s claim of minority development to a large extent.

The primary teachers’ recruitment (Teachers Eligibility Test or TET) took place in 2013 and 2014. The recruitment process of the TET 2014 batch is still in abysmal crisis, after a plethora of Calcutta High Court orders and protest by the qualifiers. With more than 20,000 TET qualifiers, Bandopadhyay, without completing the previous recruitment exercises, advertised for 16,500 new teachers’ recruitment in November 2020. This irked the 130 2014-TET qualifiers, whose documents were verified as late as in 2019 and are yet to get any recruitment. The TET qualifiers’ march to the state’s primary education department was thwarted by brutal police atrocities in December 2020. This is quintessential of West Bengal under the TMC, where jobseekers are greeted with police batons than jobs.

There are allegations of severe corruption in the primary teacher recruitment process, which has placed the entire exercise in a legal limbo. The West Bengal Government’s role is limited to follow the TMC’s diktats on which of those youths, who have paid its leaders a handsome amount of bribe, among the TET qualifiers are to be recruited. The price for a job goes to millions, and those who can’t afford that look forward to the cases fought in the Calcutta High Court over the recruitment.

Though the CPI(M)-led Left Front and its alliance partner Congress party have taken up the lack of recruitments to government jobs as a cause to corner Bandopadhyay during the upcoming West Bengal Assembly polls, the Bharatiya Janata Party (BJP), which has a troublesome record in providing public employment, has skipped the issue altogether, despite criticising the lack og jobs in West Bengal under the TMC.

Apart from the WBBPE recruitment scams, there are allegations of corruption in almost all state recruitment processes. The prestigious West Bengal Civil Service Examination (WBCS)  also came under scrutiny for alleged irregularities.

While unemployment is at 5.2% in West Bengal in February 2021, which, though is less than the national average of 7%, is a matter of concern. As the CPI(M)-led Left Front and the Congress party’s alliance has been raising the demands for employment, and making it a mainstream narrative once more, combatting the trend of making issues out of acrobatic volte-face by the parliamentarians of the TMC, as the BJP is luring the unemployed with the promise of “Shonar Bangla”, ie, the golden Bengal, it’s high time that Bandopadhyay wakes up from the slumber over the issue of unemployment.

Government employment is a key source of livelihood for the people of West Bengal and ignoring the plight of job-seekers, even by using communal tempo, will have severe political repercussions. West Bengal under the TMC has been a haven of corruption, which also capitalised upon the unemployed youth’s desperation to get a source of secure livelihood within the province. The issue of unemployment and government job, especially teachers’ recruitment scandal, will throw a big challenge at Bandopadhyay’s attempt to get re-elected in the forthcoming West Bengal Assembly elections. How soon or whether the impasse can be resolved before the elections are notified, is to be seen.