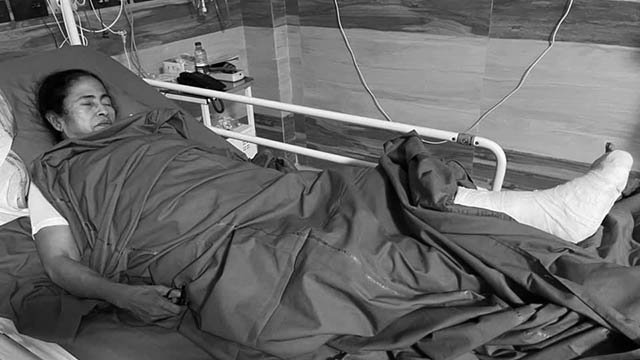 West Bengal Chief Minister Mamata Bandopadhyay alleged that she was attacked by four to five men on Wednesday, March 10th, night, while she was meeting people on her way back to Reyapara from Nandigram. She alleged that the men pushed her inside her car and tried to forcefully close the door, which injured her leg. Bandopadhyay, who is entitled to Z-category security, alleged that there were no policemen around when the incident happened.

Bandopadhyay, the ruling Trinamool Congress (TMC) supremo, is contesting the West Bengal Assembly election from Nandigram and is living in a rented accommodation in Reyapara. She said the attack happened when she stepped out of the vehicle on her way back from Birulia Anchal in Nandigram. She was supposed to spend Wednesday night at Nandigram but had to return to Kolkata, where she was taken to the state-run SSKM Hospital for treatment.

“At about 6.15 p.m., when she was about to leave Birulia Anchal after performing puja in a temple, a few unknown persons pushed her to the car and forcibly shut down the door, as a result of which she sustained injuries in her left leg and also suffered severe pain in the waist, (sic)” The Hindu quoted TMC’s Member of the Parliament (MP) Sukhendu Sekhar Ray, who was with Bandopadhyay when the incident happened.

The TMC supporters, who assembled at Kolkata’s SSKM Hospital, raised slogans against Prime Minister Narendra Modi’s Bharatiya Janata Party (BJP), which is threatening to dethrone Bandopadhyay in the West Bengal Assembly elections. West Bengal Governor Jagdeep Dhankhar, a BJP stooge, was also greeted with ‘go back’ sloganeering when he went to check on Bandopadhyay. The BJP criticised Bandopadhyay, calling the entire episode a “staged drama”. West Bengal BJP leaders alleged that Bandopadhyay is trying to gain sympathy before the elections.

Incidentally, BJP chief JP Nadda suffered an attack on his convoy in West Bengal in December 2020, when he was returning from a political programme. Bandopadhyay then accused the BJP of staging the attack to accuse her government and the TMC. Nadda didn’t receive injuries, unlike Bandopadhyay during the incident. However, the BJP created a nationwide stir using the optics of the attack.

On social media, Delhi Chief Minister Arvind Kejriwal, former Uttar Pradesh chief minister and Samajwadi Party chief Akhilesh Yadav, Rashtriya Janata Dal president Tejaswi Yadav, etc, condemned the ‘attack’ on Bandopadhyay without naming the BJP. Bandopadhyay didn’t name the BJP either. However such condemnations irked the BJP and it deployed its dreaded IT Cell trolls to thwart the allegations and turn the tide in its favour.

Accusing the TMC’s poll-strategist Prashant Kishor, the BJP’s social media trolls claimed that the entire episode was faked by Bandopadhyay as per Kishor’s direction to gain public sympathy. In a state where the TMC would go berserk—even ransack the state Assembly— and public life would come to a halt if Bandopadhyay was attacked during the erstwhile Left Front government’s reign, no major untoward incidents happened this time. Still, the chances of TMC men clashing with BJP’s thugs can’t be ruled out.

Many BJP trolls drew an analogy by comparing how Bandopadhyay’s alleged attack took place and how Kejriwal was slapped during a May 2019 roadshow amid the 2019 Lok Sabha elections. Though Kejriwal’s Aam Aadmi Party (AAP) didn’t hire Kishor as its poll-strategist in May 2019 but signed him up only in December 2019 for the Delhi Assembly election 2020, the latter is accused of planning that incident as well.

As there has been a lot of tension between the TMC and the BJP, after the latter poached many sitting MPs and members of the Legislative Assembly (MLAs) from the former, it’s expected that the incidents of violence, like the alleged attack on Bandopadhyay, will intensify in the days to come. The BJP’s desperation to win the West Bengal Assembly elections is pushing the TMC to the defensive and flaring up violence in different parts.

It’s not clear who is behind Wednesday’s attack on Bandopadhyay but it’s clear that the BJP is under due stress ever since the TMC supremo decided to fight this crucial election from Nandigram, where her former closest-confidante Suvendu Adhikari challenged her to contest. Adhikari, after the TMC’s co-founder Mukul Roy, is the biggest star of the TMC who joined the BJP lately, allegedly to safeguard himself from scam investigations.

If Bandopadhyay’s allegation of facing an attack is true, then it rings an eerie alarm for all political observers. The BJP’s resorting to violence in West Bengal isn’t a new development, however, attacks on the incumbent chief minister and then accusing her of staging it are new indeed. Whether violence will help the BJP achieve its target can be known on May 2nd 2021 but the precedents it’s setting will become cancerous for West Bengal in the days to come.