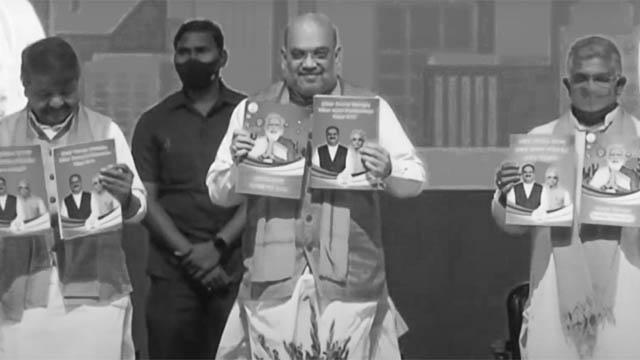 The Bharatiya Janata Party (BJP) has released its West Bengal Assembly election manifesto aka “Sankalp Patra” on Sunday, March 21st. Inspired by Prime Minister Narendra Modi’s ability to lie without any hiccups, the BJP’s West Bengal election manifesto promises jobs, “earning opportunities”, reservations, etc, in abundance to the youths. In a series of articles, we will analyse the falsehoods in the BJP’s manifesto and expose the reality. In this edition, we will discuss the employment promises by the BJP’s manifesto.

There are various employment-related promises mentioned in the BJP’s West Bengal election manifesto. Some of them are analysed here.

One ‘earning’ opportunity per family

Irrespective of the money one earns, it’s evident that for the sake of survival, and if it’s not solely through alms, people do various types of work. Each family has at least one source of income, which sustains them. Even though the earning may be too less, still most families have at least one for survival.

Now, when the BJP promises one ‘earning’ opportunity to each family, is it promising a new ‘opportunity’, in addition to the existing one, to each family? Or whether it’s going to cite the existing minimum income of each family as evidence of it fulfilling its promise? The BJP’s West Bengal election manifesto is silent on the details.

The BJP promised in its manifesto that upon coming to power it will end the stalemate in government jobs existing in the state since 2011 and open new avenues for the youth. The BJP’s West Bengal election manifesto 2021 promised to conduct a Common Eligibility Test (CET) for all government jobs and fill all the existing vacancies.

But the Modi regime has already decided to hold CET for Central Government’s Group B and C grade employee recruitment by developing a National Recruitment Agency (NRA). The CET isn’t a final score for a government job for any candidate but an additional preliminary level whose score will be used to shortlist candidates for their respective recruitment under the NRA.

Moreover, the Modi regime has made the CET an online test, which limits the participation of marginalised candidates, especially from remote areas. This, if implemented in the state government’s recruitment, will do away with the teachers’ recruitment boards, the public service commission and other nodal bodies. It will create an additional barrier for candidates from Dalit, tribal and minority communities, as these underprivileged people can’t access the same resources for preparation and tests.

The first Union CET will be held in September 2021. There is no information on the number of vacancies that will be publicised by the Government of India. But it will show how difficult the system will become for the underprivileged and marginalised candidates.

During the 2014 Lok Sabha election campaigning, Modi promised that upon coming to power he will provide employment to 10m youths of the country. It was one of the biggest lies told by him, which shattered the lives of unemployed job aspirants throughout India.

Under Modi’s rule, the employment scenario worsened in India. Forget 100m jobs by 2019, by the financial year (FY) 2017-18, India’s unemployment reached its 45-year-high at 6.1%. There were around 683,823 Central Government vacancies on March 1st 2018, as per a written reply by Minister of State for Personnel Jitendra Singh to the Lok Sabha (lower house of the Parliament) in February 2020.

The government didn’t take any measures to fill vacancies amid the COVID-19-driven intensification of the Indian economy’s severe demand crisis. Rather than increasing government’s spending and employing people through major public sector undertakings (PSUs) and public sector banks (PSBs), the Modi regime intensified its hyper-privatisation drive to sell-off all national resources, throwing more people out of jobs.

Whatever may be stated regarding government employment in the BJP’s West Bengal election manifesto, the reality is that the Modi regime has reduced the scope of government employment in India and the private sector, which is keen to maximise its profit, is looking for automation solutions with the help of Artificial Intelligence to ensure less manpower is needed to run businesses.

When the BJP’s West Bengal election manifesto 2021 promises state government jobs through the CET, then it must answer why under Modi, the number of government jobs, at the Union and state level, are shrinking?

When the Modi regime has played with the aspirations of millions of job seekers throughout India, especially in the BJP-ruled states like Bihar, Haryana, Madhya Pradesh, Tripura and Uttar Pradesh, where unemployment remained high, how is it promising fulfilment of all posts using the CET in West Bengal?

At a time, when the youths are crying for employment in the government sector, as recruitments fall year-upon-year, Modi prescribes selling pakodas to the job seekers while privatising public assets to enrich the BJP’s corporate donors. The government is mooting to do away with permanent government jobs and axe employees with more than 30 years of service record. With the advent of the anti-worker labour codes, which will be implemented after the assembly elections are over, the concept of full-time, permanent employment will be effaced permanently from Indian labour parlance.

In this scenario, talking about fulfilling all government posts is like mocking the plight of the unemployed youths, who suffer due to the neo-liberal economic policies. The BJP is exactly doing that in West Bengal. It’s capitalising on the woes of the unemployed youth, who have been deprived of government jobs by the Trinamool Congress-led government since 2011. Now, playing the old card of the 2014 elections, the BJP is going to fool the disenchanted youths and cajole them to vote for it.

By subscribing to the BJP’s West Bengal election manifesto promises on employment, the youths will be at a loss as there will be no government jobs for them anywhere but sheer distress and darkness.