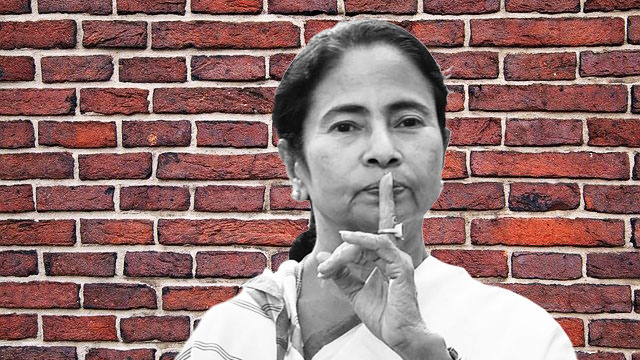 The Election Commission of India’s (EC) arbitrary 24-hour-long ban on incumbent West Bengal Chief Minister Mamata Bandopadhyay’s campaigning for the ongoing assembly elections stirred a political controversy in the state and all over India. The EC’s ban on Mamata, accusing her of instigating the people with provocative speeches against the central forces and usage of “communal overtone” during campaigning, created a ruckus and opened the floodgate of political mudslinging between her All-India Trinamool Congress (TMC) and its principal foe, Prime Minister Narendra Modi’s Bharatiya Janata Party (BJP).

Criticising the EC’s ban on Mamata, the TMC accused the EC of working hand-in-glove with the BJP to help the latter seize control of the state by hook or by crook. The Party went on to call it a “black day for democracy” and Bandopadhyay took part in a solo sit-in demonstration next to the MK Gandhi statue at Mayo Road of Kolkata. She remained silent throughout and painted pictures, while her agitated party workers demonstrated against the EC’s ban on Mamata closer to the venue.

On April 7th and 8th, the EC issued two notices to Bandopadhyay accusing her of violating the Model Code of Conduct (MCC). The EC blamed Bandopadhyay of using communal overtones after she asked the Muslims to ensure their votes are not divided. The BJP raised an alarm over Bandopadhyay’s comment and Modi himself uttered that this view of Bandopadhyay is problematic for his Party. In a statement, the EC accused Bandopadhyay of using “highly insinuating and provocative remarks laden with serious potential of breakdown of law & order and thereby adversely affecting the election process (sic)”. But this outrage was selective, as the EC spared the BJP stalwarts from any punitive restrictions.

So far the EC didn’t take any cognisance of the verbal diarrhoea of motormouths like the turncoat TMC stalwart Suvendu Adhikari, who used communal innuendos in galore to instigate the voters in Nandigram, where he is facing Bandopadhyay. Rather, after facing a lot of criticism for its arbitrary action against Bandopadhyay, the EC debarred an insignificant BJP leader, Rahul Sinha, from campaigning for 48 hours. Mr Sinha gloated over the bloodbath at Sitalkuchi in Cooch Behar district, saying the central forces should have massacred more there.

The EC’s ban on Mamata dug out those uncomfortable details that the poll body tries hard to bury deeper during each election. Since 2017, the Opposition has been accusing the EC of working in connivance with the BJP and allowing it a free hand during elections. During the 2021 West Bengal Assembly elections, the EC dropped all pretence of playing as a “neutral” and “impartial” umpire. It unapologetically began advancing the BJP’s cause, without worrying about the blemishes on its reputation.

From fixing eight-phased elections to the recent massacre of voters in the Jorepatki booth of Sitalkuchi Assembly constituency of Coochbehar district, the EC supported the BJP and Modi in all possible ways. The EC has also tweaked rules regarding polling agents at the behest of the BJP, as the latter lacks organisational presence in the state. The EC remained a mute spectator when Modi used catcalls against Bandopadhyay. The EC merely paid lipservice regarding communal venom spewing by Adhikari, and it didn’t notice Dilip Ghosh, the rabble-rouser West Bengal BJP chief, uttering sexist comments and threatening people with violence.

Though Sunil Arora, the former chief election commissioner, under whom the BJP managed to sweep the 2019 Lok Sabha election with utmost ease, is now out, the new top man, Sushil Chandra isn’t different. Both Arora and Chandra gave clean chits to Modi and his lieutenant Amit Shah for MCC violations during the 2019 Lok Sabha polls. When the other officer, Ashok Lavasa, who was supposed to become Arora’s heir-apparent, dissented against the Modi-Shah’s clean chit, he was cornered, charged with false cases and forced to leave his job. If Lavasa had succeeded Arora, then it would’ve been a problem for the BJP as he was to remain till October 2022, overseeing the current election and later that of Uttar Pradesh as well.

Under these circumstances, even with Chandra’s ascension, there are fewer chances that the West Bengal Assembly elections will be free and fair even in the last four phases. It’s important to comprehend that only an anti-fascist people’s movement will be able to defeat the BJP and overthrow its fascist hegemony. After the EC’s ban on Mamata, it will be infantile to even remotely believe that the polls will bring any tectonic change.