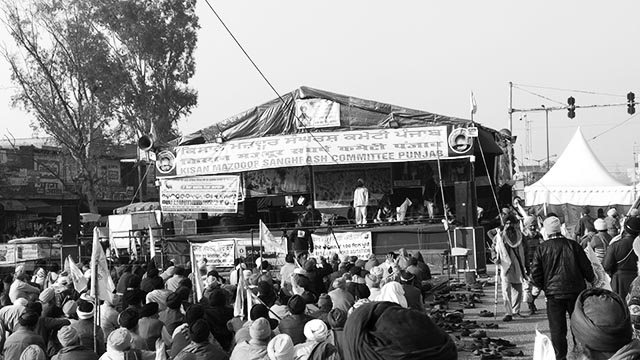 On April 26th 2021, the Kisan Andolan turned five months. It became the longest sit-in demonstration movement in India and even surpassed the Shaheen Bagh sit-in demonstration by Muslim women against Modi’s contentious citizenship matrix. Last year, the Modi regime used the COVID-19 lockdown as an excuse to evict the peaceful protesters at Shaheen Bagh and other locations. However, the obstinate farmers won’t give up their movement demanding the scrapping of the three laws and a legal guarantee of minimum support price (MSP) for their crops.

Failing to persuade the farmers to give up, Modi’s Bharatiya Janata Party (BJP) and its parental body Rashtriya Swayamsevak Sangh (RSS) have intensified their vitriolic propaganda against the farmers. Bringing in the corporate-controlled media to shape mass opinion against the Kisan Andolan using the COVID-19 subterfuge, just like the Tablighi Jamaat episode of 2020, the RSS-led Hindutva bandwagon is trying to justify a proposed “Operation Clean”, which the Modi regime is purportedly mooting to evict the farmers from the protest sites.

BJP’s Member of the Parliament (MP) Parvesh Sahib Singh Verma accused farmers of stopping oxygen supply from reaching Delhi. This accusation was used by the BJP to kill two birds with one stone. On one hand, it wanted to shield the Modi regime’s failure in containing the pandemic and, on the other hand, it provoked the masses against the Kisan Andolan, which has become a thorn in its eyes.

But Hindi daily Amar Ujala published a story detailing how, despite the BJP MP’s accusation and the allegation by the tanker owners that the Kisan Andolan participants are stopping the oxygen supplies from reaching Delhi, the driver of one such tanker credited the assistance he received from the farmers, which helped to deliver oxygen to Delhi two to three hours early. This busting of the BJP MP’s fake news peddling was also cited by farmer leader Rakesh Tikait of the Bharatiya Kisan Union (BKU). Tikait has condemned the obnoxious agenda of the BJP to vilify the protest movement.

The RSS’s Hindi mouthpiece Panchajanya’s recent cover story portraying a rosy picture of farmers “benefitting” from Modi’s pro-corporate farm laws is, according to the Newslaundry website, a copy-paste one and is based on lies. Newslaundry showed how the RSS’s mouthpiece copied stories, often verbatim, from past publications, including one from the era of former prime minister Manmohan Singh, to drive home a point that Modi’s pro-corporate farm laws are beneficial for farmers.

Similarly, there has been constant social media propaganda blaming that the farmers are spreading COVID-19 in the protest sites. However, the fact is more than 300 farmers have died since November 26th 2020, when their tractor caravan reached Delhi’s borders. None of them died due to COVID-19 but due to the Modi regime’s apathy. Repealing the laws would have sent the farmers home long ago. But the Modi regime, driven by sheer hubris, won’t go against the corporates that sponsor the BJP and the RSS. It has no courage to oppose the World Trade Organization (WTO), which shaped these laws. Therefore, the face-off continues.

But much to the dismay of the Modi regime and the corporate-controlled media, the farmers are not giving up their movement and not buckling under any pressure. Speaking to People’s Review, farmer leader Rashpal Singh of the Kirti Kisan Union, Punjab, who has been at Singhu border since November, claimed, “we are here since last five months, we have not used masks, yet no one suffered due to Corona (COVID-19). The farmers are not spreading Corona, but the government, in the name of Corona wants to evict the movement, wants to send home the farmers, this is the ‘Operation Clean’, nothing else.”

BKU (Ekta Ugrahan) leader Joginder Singh Ugrahan appealed to farmers to remain vigil during the harvesting season and “should move to Delhi in large numbers even during the harvesting season, be alert and concerned about the struggle even while working in their fields.” This warning came after the farmers anticipated that the Modi regime is planning a massive crackdown under the “Operation Clean” at Delhi’s borders.

Warning the government of severe backlash if it plans to use force to evict the farmers, Gurnam Singh Charuni of BKU (Charuni) tweeted: “They can kill us, but the BJP should not be mistaken that they will be able to get the farmers to vacate the protest sites. If the Government takes such an action, the BJP will not be able to save its face.”

Other farmer unions are also determined to carry on the Kisan Andolan. Singh said “… we won’t move from here. We will go only after getting these laws as we have no alternatives left.”

Despite hardships, the farmers are relentlessly busting the COVID-19 paranoia and the lies spread by the Modi regime regarding the Kisan Andolan. They are using social media, braving censorship, to send out their words of hope and determination to the world. No amount of vilification or fake propaganda or censorship can stop them now. The swelling borders prove this.