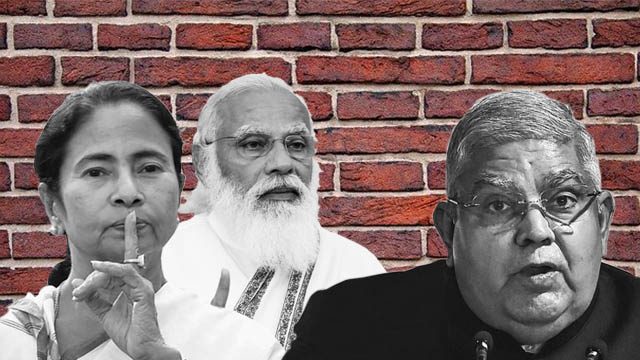 Prime Minister Narendra Modi’s ploy to topple Chief Minister Mamata Bandopadhyay’s recently-elected government in West Bengal by creating a constitutional crisis with the help of Bharatiya Janata Party (BJP) leader-turned-gubernatorial office-holder Jagdeep Dhankhar was exposed when the Central Bureau of Investigation (CBI) went on an arrest spree on Monday, May 17th 2021 in the five-year-old Narada Sting Operation case. The unconstitutional arrest of three Trinamool Congress (TMC) leaders, including ministers and legislators, created a ruckus, involving Bandopadhyay, the optics of which is used by the BJP and Dhankhar to demand the imposition of President’s Rule in West Bengal under Article 356 of the Constitution.

In the early morning of Monday, the CBI sleuths, along with contingents of central armed police forces (CAPF) raided the residences of West Bengal Transport Minister Firhad Hakim, West Bengal Panchayat and Rural Development Minister Subrata Mukherjee, a member of the legislative assembly (MLA) Madan Mitra, and arrested them with an order from Dhankhar signed when the state’s government was not formed after the election results were out on May 2nd. Former Kolkata mayor Sobhan Chatterjee, who earlier joined the BJP but recently left the party, was also arrested. The CBI didn’t take any permission from West Bengal Assembly’s speaker Biman Bandopadhyay, which is needed for arresting any legislator.

The by-passing of the rules shows the urgency of the CBI in a case involving bribery of a few hundred thousand rupees by a fictitious entity, given to trap the TMC leaders before the 2016 Assembly elections. However, the CBI didn’t even name—forget arresting—the turncoats like Suvendu Adhikari and Mukul Roy, who were also seen accepting money in the sting operation and who joined the BJP to get clean chits from the Agency. This shows how the case and the CBI are used by the BJP to score a brownie, to avenge its humiliating defeat in the recently-held West Bengal Assembly elections where even the prime minister and the Union home minister went to the lanes and bylanes of the state to seek votes out of their desperation to win the state.

Though a petty case of accepting bribe by a bunch of TMC leaders will not suffice to impose President’s Rule in West Bengal, the strong reaction by a visibly irked Bandopadhyay, who couldn’t tolerate the debauchery by Union Home Minister Amit Shah in connivance with Dhankhar during the peak hours of COVID-19 crisis in the state, provided the BJP with the much-needed optics. As Bandopadhyay sat on a protest at the CBI Office in Kolkata’s Nizam Palace, rumbustious TMC supporters rampaged on the streets, which provided an opportunity for Dhankhar to fire his cunning warning shots.

Dhankhar tweeted that there is a visible constitutional crisis in the state as the chief minister came out against the Union government. This is the second instance of Bandopadhyay entering into a direct fistfight with the Union after she sat on a demonstration with Indian Police Service (IPS) officers—deputed by the Union—against the arrest of Kolkata Police’s former commissioner Rajiv Kumar. The eye-ball-to-eye-ball standoff between the central agencies and the Kolkata Police’s troops also took the state to the verge of a constitutional crisis. Under Article 356, the governor of a state can recommend President’s Rule by toppling the elected government in case there is a constitutional crisis. Dhankhar is playing according to the book and Bandopadhyay’s outburst is paying a rich dividend to the BJP.

Just before the CBI arresting Hakim, Mukherjee, Mitra and Chatterjee, Dhankhar toured the post-poll violence-hit areas selected by the state BJP. He went to the BJP victims and met them, ignoring the TMC’s victims who have suffered macabre atrocities unleashed by the BJP, especially in the northern districts. This selective approach by Dhankhar showed that he is trying to use a narrative that will portray the BJP—and through it, the Hindus—as victims of violence unleashed by the TMC, which will be shown as a Muslim party. This is the conspiracy hatched by Modi and Shah to ensure that there are multiple reasons ready for it to defend the decision of imposing a President’s Rule in West Bengal.

But why the BJP can’t accept its defeat and move on? Why can’t it be happy that it has won 77 seats vis-à-vis three in the 2016 West Bengal Assembly elections and has come second in almost all places where the TMC has won?

The BJP has an obnoxious agenda regarding West Bengal for years. It has inherited its parental body Rashtriya Swayamsevak Sangh’s (RSS) Bengal mission–to turn the state into a strong base by popularising Islamophobia. The RSS has been operating in West Bengal since the 1970s and grew exponentially to have 1,600 units—Shakhas—in 2020. The RSS has aimed presence in all villages by 2021, and it’s an alarming situation.

To support the RSS’s agenda of growth and permeating the Hindutva fascist ideology deep inside the diverse Bengali society, the BJP needs power in the state. It knows, once the RSS’s ideology garners steam, it will be able to rule the state unchallenged, depending upon the support of the scheduled tribes and scheduled castes, which it will use to establish a monolithic, Brahminical theocratic tyranny.

Also, West Bengal has 16 seats in the Rajya Sabha, the upper house of the Indian Parliament, the fourth highest in the country, and 42 seats in the Lok Sabha, the lower house, the third-highest in the country. The ruling party has leeway against its competitors and that’s why the BJP is keen to seize power in the state. The control over 42 Lok Sabha and 16 Rajya Sabha seats will provide security cover to the Union government.

Apart from this, as West Bengal has a culture of resisting fascism and communalism, the RSS and the BJP must pulverise the Bengali people’s resistance. That’s why the BJP wants to seize control of the state—with the draconian Disaster Management Act, 2005 (DM Act, 2005), in practice, the Modi regime is the defacto ruler of the state—and turn it into a bulwark of Hindutva fascism.

Now that the Modi regime is playing dirty tricks like cajoling Bandopadhyay to impose a partial lockdown using special powers under the DM Act, 2005, the prime minister is discussing the situation and giving tasks directly to the district magistrates, bypassing the state government. This shows that the attempt to dislodge Bandopadhyay’s government and impose President’s Rule in West Bengal aren’t sudden affairs.

As the Modi regime plans to conduct the National Register of Indian Citizens (NRC) exercise in. the months to come, it needs a heavy deployment of CAPFs to prevent any mass upheaval. The NRC exercise will provide the BJP’s corporate sponsors with cheap, stateless labour. The NRC can only happen when the state government’s participation in law and order maintenance. As Bandopadhyay has been a vocal opponent of the draconian exercise, so the BJP and the Modi regime need a subordinate regime to carry out the work in a hassle-free way.

So the TMC’s trio’s arrest isn’t an isolated incident but a carefully planned one to destabilise the government and pave way for a President’s Rule in West Bengal. This is a very crucial juncture of the state’s polity as the defeated party in the election has started a very cunning political manoeuvre and it’s time to realise its greater goals. Those who are supporting the CBI on the arrests must remember that it was never about corruption. The BJP wants West Bengal and hence it has launched an attack that must be resisted by the people of the state across communal and community lines.