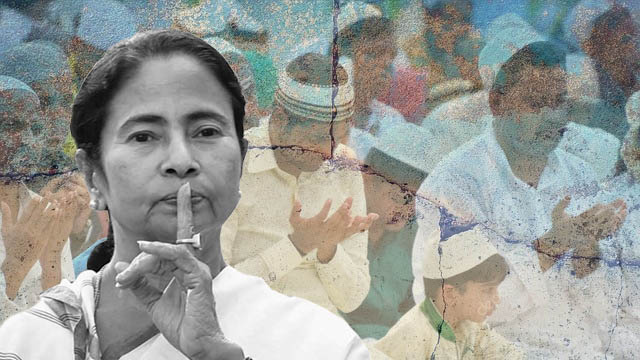 The eight-phase-long West Bengal Assembly elections’ results are out. The news channels are brimming with the election counting stats, which unequivocally point towards a sweep by Mamata Bandopadhyay’s Trinamool Congress (TMC). At this point, television anchors and the pollsters are making their innards out to establish how many Muslim votes or Hindu votes Bandopadhyay has got vis-à-vis Prime Minister Narendra Modi’s Bharatiya Janata Party (BJP).

This blatant utterance of polarised electoral air of West Bengal does not surprise the ears anymore. Almost all pollsters are suggesting Bandopadhyay’s TMC has got almost the whole chunk of the 30% Muslim votes. This optics may suggest that Bandopadhyay is a ‘messiah’ of West Bengal’s Muslim community. Is it a reality that under Bandopadhyay’s rule the Muslims have got an El Dorado or it’s a wilful conspiracy: first pushing Muslims into an ‘optionless’ space and then squeezing all votes from them?

When the Left Front was in power, they always enjoyed the unconditional support of the Muslims, except in two-three districts. Muslims in West Bengal after the partition never had a prominent political voice. They were happy under the Left Front for their survival. But at the end of the Left Front’s rule, Muslim votes began to slide from their bags and went to Bandopadhyay. The abysmal socio-economic condition—as reflected by the Sachar Committee report—of the Muslims, the Nandigram land movement and anti-incumbency factors were largely responsible for this.

Unlike her opponents like the BJP and the left, Bandopadhyay’s TMC is not a regimented organisation. Not much ideological fanfare dominates her narrative. She embraces the clear shortcut formula to be in power for long. The concept of ‘class’ was replaced by identity politics. Bandopadhyay began to focus on wooing almost 30% Muslim vote bank.

Given the fact that a party with a 45%-50% vote share can form a government, Bandopadhyay’s plan has been obvious– to consolidate the 30% Muslim votes and her own majority secular Hindu vote bank. This combo is her magic wand of power. Bandopadhyay began organising Iftar parties (the fast-breaking ritual of Muslims during the holy month of Ramzan), started giving out “Imam Bhata”, ie, a monthly allowance of Rs 2,000 to Muslim clerics, albeit from the Waqf Board’s money, ie, the fund donated by the Muslims for the welfare of the community.

Breaking the tradition of West Bengal’s chief ministers, Bandopadhyay started attending Iftar get-togethers wearing the Muslim women’s headgear. She was seen even reciting Islamic verses along with verses of other religions. She created an impression of being a part of the Muslim community. So much so that the majority community began mocking her as “Mamata Apa” (Apa is a Muslim nomenclature of elder sister).

Bandopadhyay’s populist politics won her the Muslim votes; subsequent elections after 2011 are proof of this. Without doing substantial development, Bandopadhyay remained the favourite of the Muslims.

With a Muslim population of nearly 30%, only 13.2% of them are in salaried jobs when the national tally is 22.1%. Around 34.3% of Muslims work as casual workers surpassing the national number of 26%. It indicates Muslims in West Bengal work in more precarious jobs. The monthly income of a self-employed Muslim worker (Rs 6,197) also less than what they earn in other states, which is Rs 10,192.

Bandopadhyay and her TMC, which always claim to protect the minority Muslims, have done nothing in substance for the upliftment of the community. The recent recruitment of teachers in government English medium Madrassas is a burning example of its apathy. There was only one Muslim candidate, among 12, in the list of successful candidates. The same thing happened in July 2020, when not a single Muslim candidate was enlisted.

Under her rule, the condition of the government-aided Madrassas is deplorable. In her ten-year-long rule, recruitment happened only twice–of which one examination took place during the Left Front’s rule, but recruitment took place in 2011. The 614 government-aided Madrassas are suffering due to a lack of teachers. If she wants to empower the Bengali Muslim community, then she should have empowered the Madrassas–on which a large number of students belonging to the poorest of the poor Muslim families depend. Around 600,000 students, both Hindus and Muslims, depend on these Madrassas.

Her constant drumming and pseudo-sympathy for the Muslim community created space for the BJP. The BJP started polarising Bengalis on religious lines by using Bandopadhyay’s gimmicks. Both the parties gained from this religious polarisation. While Bandopadhyay consolidated the Muslim votes by highlighting the BJP threat in West Bengal, the BJP trenched into the majority community and polarised it.

Bandopadhyay turned the 2021 West Bengal Assembly elections into a bipartisan affair. When the BJP’s aggressive campaign became more polarised, she began to toe the soft-Hindutva line. She knew well as the BJP has come into the play, so no need to woo the Muslims for votes any further. Muslims, the “milky cows”, will vote for her by default. In the 2021 assembly elections, the TMC drastically reduced the number of Muslim candidates. While in the 2016 polls, the TMC fielded 53 Muslim candidates, which was 18% of the total candidates, in 2021 it nominated 42 candidates, just 14% of the total candidates.

If anyone had listened to the whisperings in the Muslim villages during the assembly elections, they could have heard “Jodi Baanchte Chao, Trinamool Ke Vote Dao” (if you want to live, vote for the Trinamool Congress). This is what Bandopadhyay has done to the Bengali Muslims. She has pushed them in an ‘optionless’ condition.

Despite the TMC’s stunning victory in this election, it’s a surely lost game for the Muslim community. During one of the election days, a villager was ranting justifiably, “Ekjon Jaane Marbe, Arekjon Bhaate Marbe.” [One (read the BJP) will take our lives, and another (read the TMC) will take our livelihoods). So, the Muslim votes that Bandopadhyay won, were not endorsing her developmental work but were cast against the BJP’s bugaboo. The BJP has landed in West Bengal riding the TMC’s back and now its presence has turned the Muslims optionless and hapless. TMC remains the last straw they clutch to remain alive.