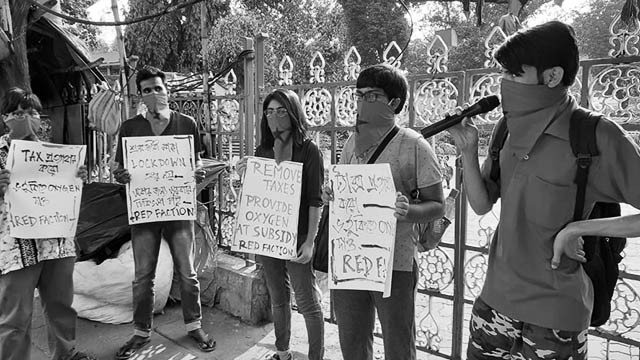 Red Faction, a new left-wing outfit, organised a protest demonstration against the ongoing lockdown in West Bengal. The demonstration was organised near the Lenin monument in central Kolkata’s Esplanade on Saturday, May 1st 2021–International Labour Day. The demonstrators opposed the state government’s recent lockdown order, alleging that it will devastate the lives of the poor, who couldn’t recuperate from the shocks of the macabre 2020 lockdown.

Accusing Prime Minister Narendra Modi’s regime at the Union and incumbent Chief Minister Mamata Bandopadhyay’s regime at the state of showing apathy towards the poor people to appease the rich and the middle-class, who have become paranoid due to the COVID-19 second wave, Red Faction demanded an immediate end to the lockdown. It called the lockdown “anti-poor” and against the working class’s interests.

Debjani, the spokesperson for the Red Faction, said that the oxygen crisis that India is currently facing is a “public health crisis”. She said, “we are placing the demand that oxygen must be provided at a subsidised rate, and all the taxes (on oxygen), including 12% GST, must be waived.” The Red Faction claims that it’s the only organisation so far to organise a movement demanding subsidised oxygen for the people.

The common people of West Bengal, who have suffered a lot economically during the 2020 lockdown and its aftermath, especially the unavailability of the suburban local train services, a lifeline of southern Bengal, have been vociferously opposing the lockdown order. It’s feared that the new lockdown order will throw millions out of jobs again, for an indefinite period, without any minimum sustenance provisions from the government.

Nationalisation of healthcare is one of the crucial demands of Red Faction, which has linked the working class’s demand for livelihood security with the issues that concern the common people when thousands are dying daily throughout India due to the lack of treatment, oxygen and medicines. This is a demand that Red Faction thinks will become a popular demand throughout India.

Despite having a year, the Modi regime didn’t do anything to improve the mechanism. Debjit Bhattacharya, one of the Red Faction organisers, alleged that the government is running its enterprise everywhere to kill the working class, which has pushed the oppressed people to the walls.

“We have no escape from here. Either we fight or we die, this is the situation we are in now. Hunger is the major concern in life… these governments, be it the Union or the state, none will feed us, rather, they will snatch whatever little is left with us and then gift those to Adani and Ambani”, Bhattacharya said at the demonstration site referring to Gautam Adani and Mukesh Ambani, the big comprador capitalists of India who are also the principal sponsors of Modi’s bandwagon.

Red Faction organisers claimed that they want to capture the space left void due to the so-called left’s exit. At a time when none of the ‘left’ or other progressive forces is hitting the streets to fight against the oxygen crisis by forcing the government, both at the Union and state, to play the pivotal role in managing public healthcare, this initiative by the Red Faction on May Day caught people’s attention.

Whether Red Faction can mobilise the working class and exploited poor to force the government to nationalise healthcare and provide subsidised, tax-free oxygen in a planned manner to everyone in need should be seen now. If it can, then it will be able to impact the politics in West Bengal and beyond, in the long run. The rise of a new left can redefine how politics in West Bengal is done.